Turn for the Worse 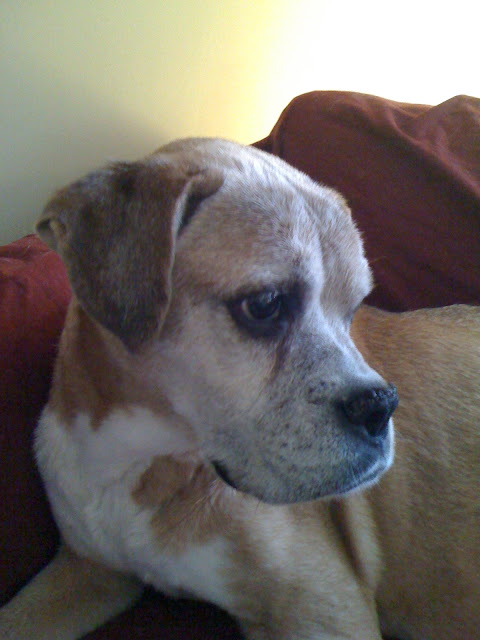 Ruby's health, as it turns out, may not be as stable as we first believed when she arrived on Friday. Despite her big belly and heart problems, she was mostly OK through the weekend, even eating most of a lamb bone. But when I took her for a walk yesterday morning, she collapsed on the sidewalk.

I'm not sure whether she lost consciousness -- if she did, she came back within moments -- but she couldn't stand for several minutes. Finally she did, and walked back to the apartment under her own power.

She slept all morning, which is typical, but in the afternoon she began acting a little strange -- restless and a bit disoriented. She ambled aimlessly around the apartment, panting. Then, in the evening, she had another episode, collapsing and appearing dazed. We sat with her for about an hour, thinking she might die right then and there. But she finally relaxed and fell asleep, and we brought her to bed when we turned in. I'd check on her whenever I woke in the night just to make sure she was still breathing. She slept very soundly. 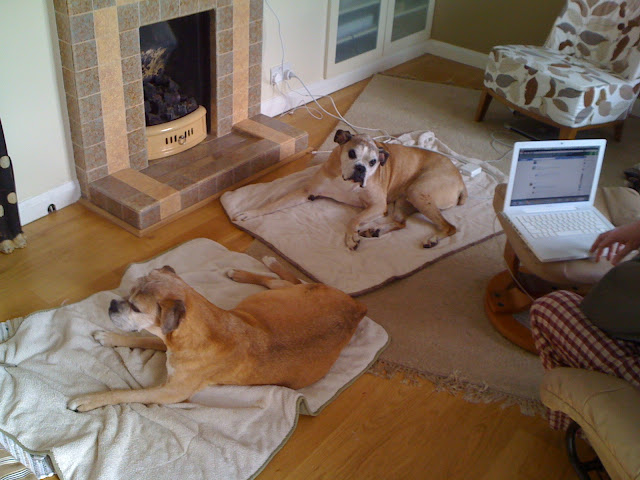 This morning she seems more like herself. She got up, went outside, wagged her tail and ate breakfast as usual. She doesn't seem to be breathing with any difficulty. (That's Ruby in the foreground above, with Ernie looking at the camera.)

We're not sure what to expect. She could still be recovering from her transatlantic adventure -- maybe it weakened her more than we realized. I also walked her and Ernie around the neighborhood the first two days they were here, and maybe that was just too much too soon.

In any case, we're going to let her rest a bit more. Dave thinks she may be "sundowning," or having confusion and agitation in the evenings. We'll see what happens tonight. We don't believe there's any point in stressing her out with a visit to a vet -- we already know nothing can be done about her condition. If she continues to get agitated or have fainting spells, we may need to make a decision -- but I hope we can forestall that as long as possible.
Posted by Steve Reed at 9:21 AM

I'm sorry to hear about this. I hope lots of rest and TLC is all Ruby needs.

Better stay close to home on walks with Ruby. I'm glad she is with you. It doesn't sound like she is in any pain. With old dogs, it's just one day at a time, enjoying their company while you still can.

I agree with Barbara - stay close to home - especially in the evenings. It IS good that she has you two to care for her.

Like people our beloved pets just know - seems as though she is so happy to be with you at last, she has been waiting for this. At last.
My pooch is old and deaf- we are going away for two weeks in december- He will be in very good hands and i feel pretty good about it BUT...well, you know.