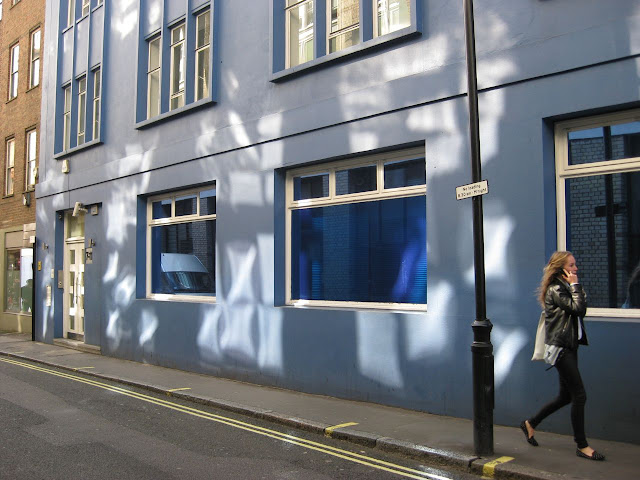 I've been spending a lot of time lately over at Sleepless in Southie, a blog by a young gay guy in Boston. I don't remember how I first stumbled onto his blog, but I've become quite addicted, and so far I've paged back through about 330 of his 445 pages of content. It's not often that I find myself motivated to read someone's entire blog.

It's not a lot of reading -- like many Tumblr blogs, it's mostly pictorial -- but it's a fun combination of gay culture, pop culture and brief posts about real-life issues like work and romance. (A word of caution to my readers -- this means you, Mom! -- those who click over must be prepared for frank discussions of gay sexuality.)

Anyway, I'm mentioning this because his blog has taught or reminded me about so much. For example, the story of Hibiscus.

You've all seen the photo below, right? It's a famous image from a 1967 anti-war demonstration at the Pentagon, by photographer Bernie Boston. It was published in Life magazine, among other places. 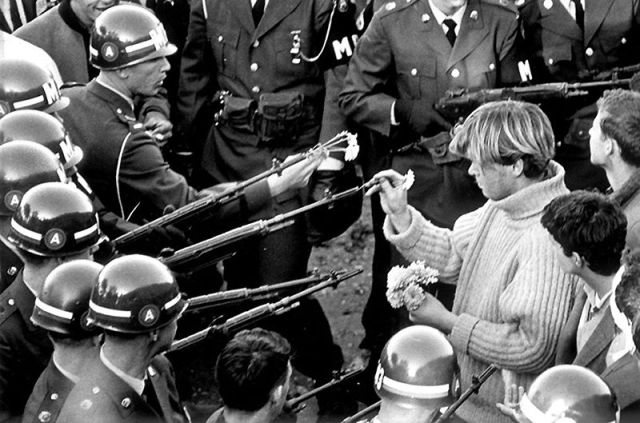 As a teenager, looking through my Life photography anthology, I always liked this image. I was a committed hippie sympathizer, and besides, that blond guy looked kind of cute. So when I stumbled onto the back story about the photo and the blond guy on Sleepless in Southie, I was fascinated.

It turns out his name was George Harris. At the time of the picture he was a teenager, but just a few years later in San Francisco he became a drag queen who went by the name of Hibiscus, part of a psychedelic drag act known as The Cockettes. He flourished in the counterculture scenes of San Francisco and New York until the early 1980s, when he died of AIDS. He was one of the first AIDS deaths in the country, dying before the disorder even had a name.

The New York Times Magazine ran an article several years ago about this photo and Harris. I think I read it at the time, but I'd forgotten it. So kudos to Sleepless for refreshing my memory.

Sleepless has also taught or reminded me:
-- that Alicia Bridges, who sang the '70s disco hit "I Love the Nightlife," is a lesbian.
-- that Mae West recorded a cover of The Doors' "Light My Fire."
-- that Karen Carpenter made a disco album.
-- that Track Palin, Sarah Palin's son, lived in Portage, Mich., in 2006 in order to meet hockey scouts. (Dave taught high school in Portage before moving to New York and meeting me!)
-- about popular Internet videos like Randall's "Crazy Nastyass Honey Badger" and the Grey Gardens-ish Royce and Marilyn.
-- that one of Carol Channing's grandparents was black.
-- about gay author John Rechy, whose work I now plan to read.
-- about avant-garde New York performer Klaus Nomi.

Not to mention pop music and television -- this guy follows singers and shows that are utterly alien to me. (He has a special thing for Mariah Carey, but I have heard of her -- I'm not that pathetic!)

Also, he has the stereotypical gay fascination with Judy Garland, "Mommy Dearest" and other cultural touchstones. Once again I'm marveling that many gay men, even gay men of a younger generation who were 20 years away from being born when Judy Garland died, have such common interests. Fascinating!

Have you introduced yourself to Sleepless? Every now and then someone chooses to read a lot of my 2,000+ posts and it freaks me out a little if that person remains anonymous.

I often marvel that a single person can know so much, be so well connected. Know what I mean?

Ha! I did send Sleepless a message telling him I wrote this post. I wonder if he can even see that I've paged through his blog? I don't know how Tumblr records page views, if at all.

As for knowing so much, I suppose we all have our areas of specialization, and it's not often they overlap. I don't know Klaus Nomi, but maybe Sleepless doesn't know Marjorie Kinnan Rawlings. (Or maybe he does -- but my point is, good bloggers can always learn from each other!)

Whenever I see them, I always think of you.

Can you explain the fascination with Judy Garland? I've tried but just don't get it.

Thanks for passing on all the fascinating information. Wow. Very cool. I miss you, Steve. Fall is here and I'm having my annual hankering to walk around and take pics with you.

and yes, can you explain the judy garland thing? i have often wondered, too.