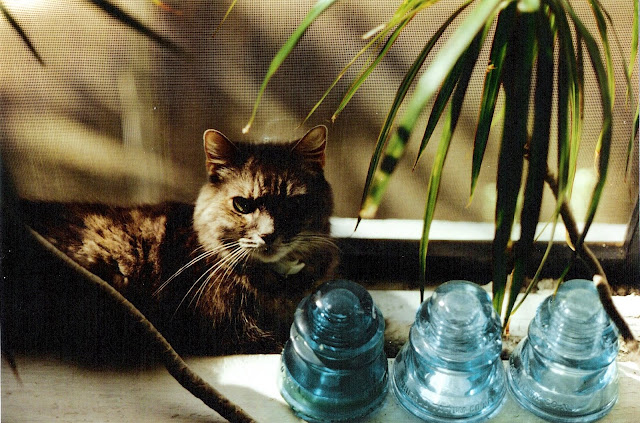 Here's one more selection from my old journals , 20 years ago today!

Today I have a nasty cold. I don't know where it came from -- it descended on me late last night and today I've had a sore throat and a nasty raw sinus. I think I've got a cough coming on, but no fever.

I've had a really busy weekend! Yesterday I went with Kevin and his friends John and Rick to some thrift stores, in search of accessories for our Halloween costumes. Mine is basically done, but no one else has been working on theirs, I think. I told you we're going as waitresses, right? It should be hilarious.

Then, last night, I went to see a very bizarre movie called "My Own Private Idaho" with Kevin and a whole flock of his friends. It was a strange movie and a strange night.

I went home today, did laundry, and visited with mom and JM. The weirdest thing I did today was cut papayas for Mrs. Pass. She came over to get mom to do it because she couldn't reach them, so I went over to help. It was interesting -- the trees are tall and woody, but they grow incredibly fast. In a year a papaya gets to be pretty big! I was up 8-9-10 feet or so, and I'd slice off these huge fruits bigger than a football. They came off the tree easily, green with a tinge of orange. Mrs. Pass said the possums were eating them -- she planned to get a gun and do the animals in. I held my tongue.

I saw a deer in Land O' Lakes today -- the first one I've ever seen there. When I turned on Wisteria Road from (highway) 41 it was grazing beside the road. It saw me and leaped into some underbrush. I couldn't believe it! Mom and I saw a raccoon that evening, too. There must be some hungry animals out there for some reason.

I finished my book -- "Wintering," by Diana Kappel-Smith -- it was tedious at first but I got very attached to it after a while. Now I'm watching "Against All Odds" because it's too early to go to bed, and it was either this or a "Dynasty" TV movie. It's an '80s kind of night!

I don't remember who went on that movie outing or why it was "a strange night."

Mrs. Pass was our next-door neighbor in Land O' Lakes, where I grew up. She was constantly grousing about animals eating her fruit, but to my knowledge she never shot any. She has since moved away, but my mom is still in touch with her.

Deer sightings in Land O' Lakes have become much more common, perhaps because of habitat loss and encroaching suburbs. I never saw deer there as a child, when they had more room to roam.

(Photo: My cat Angeles in my apartment around the time I wrote this journal entry. I got Angeles in 1985, when she was an adult stray who wandered up to my door. She died in 1993.)
Posted by Steve Reed at 7:14 AM

I remember Angeles...I saw her picture and thought back twenty years but was so busy scrounging as a freelancer I don't recall much else.

Any pics of the waitresses? And is this the Kevin I've met? I'm amazed you still have your journals from 20 years ago AND that they went with you to England.

My life 20 years ago seems like a blur. I wish I had been writing a journal...

Barbara, you'll find a pic of me in the waitress outfit just a few posts back. :)