Incense, Orchids and the Bathrobe Woman 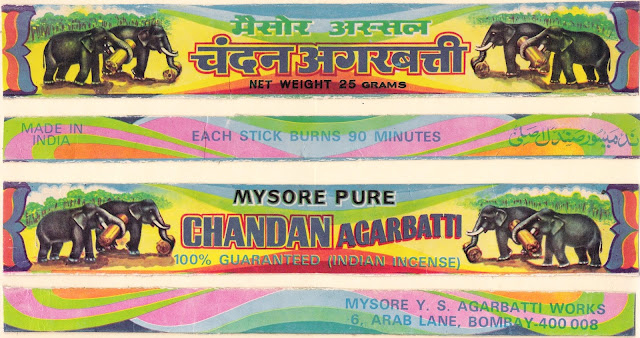 And now for something completely different, as Monty Python would say.

This is the remains of a box of incense that I bought in Marrakech, Morocco, in 1992. Even when I bought it I thought it looked old, like it had been hanging around the shop for a couple of decades -- perhaps from the era of Jimi Hendrix and the other counterculture types who traipsed around Morocco in the late '60s. It was incredibly dusty, as I recall. I must have used the incense -- I honestly don't remember -- and when it was finished I cut up the box and glued it into my journal, because I loved the artwork so much. Groovy! 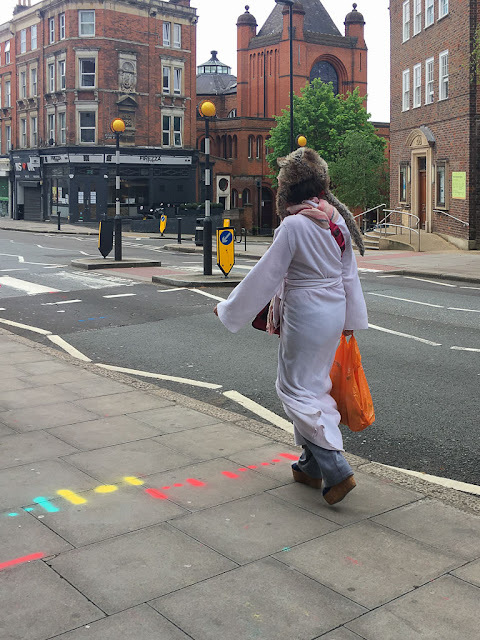 My only excitement yesterday was walking the dog and having a Zoom chat with my library colleagues. While walking Olga I spotted this woman, another of our neighborhood free spirits. She walks around the high street rather dramatically wrapped in unusual clothing -- in this case what looks like a bathrobe. Sometimes it's a bedsheet done up like a toga. Her dark hair is usually loosely pinned with a big red flower -- the flower is there in the photo above, but you can't see it under her furry hat. And those cork-heeled platform shoes!

Anyway, it's not a very good picture, and one of these days I'll have to get a better one. But you get the idea. 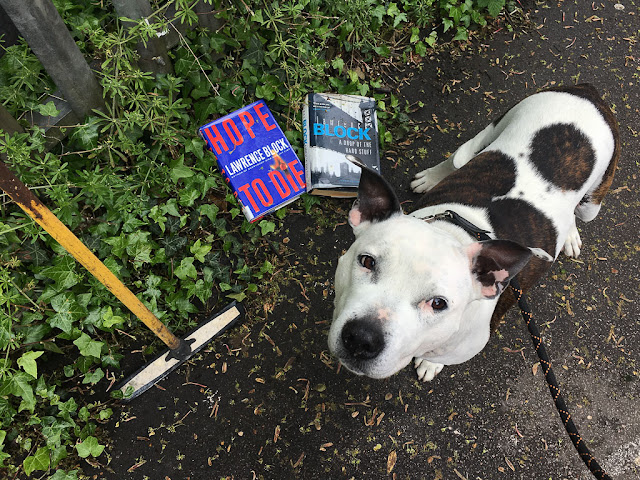 Off the Black Path by the railroad tracks, I spotted a pair of books lying in the ivy behind the fence. And not just any books -- LIBRARY BOOKS! Well, as you can imagine, I couldn't let that stand. I looked around and found a long squeegee on a nearby rubbish pile. (There's always handy rubbish around in London.) I used it to pull the books through the fence. Of course, because we've had rain over the last two or three days, they were completely ruined. As it turned out only one was a library book -- from Montreal, of all places -- and believe me, they wouldn't want it back. I returned the squeegee to the rubbish heap and threw the books in a trash can.

Olga is watching my right hand in the photo above because I was holding her Kong. That's all she cared about.

(As an aside, if you type "Montreal" into Google, it prompts you to search for "Montreal Screwjob." I had no idea what this meant, so I did it -- with some trepidation, admittedly. Turns out it was a controversial 1997 incident in professional wrestling, in which wrestler Bret Hart was deprived of his championship title. The things you learn! Google prompts can sometimes be pretty interesting.) 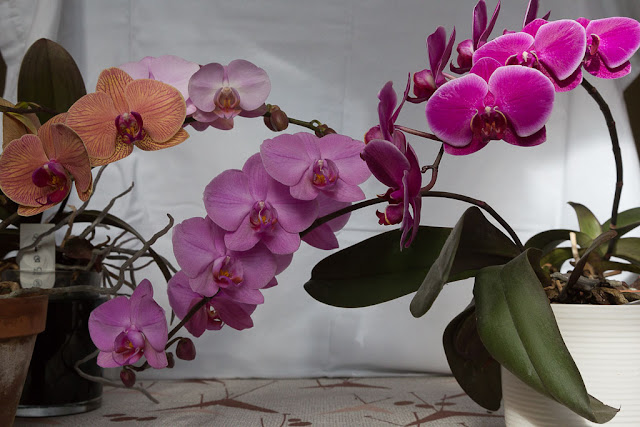 Finally, here's a photo showing some of our blooming orchids -- the ones in the dining room. It put them all on the table for a "group shot." They're looking really good right now -- kind of psychedelic, like my incense box! The three pink orchids are all rescues, plants I picked up on the street that other people had discarded. The orangey one on the left we bought several years ago and it reliably blooms every year.

Dave and I have been watching "The Mandalorian" at night. We had to buy a subscription to Disney+ to get it, but it's not very expensive, and we've wanted to see this series -- a "Star Wars" prequel featuring the infamous Baby Yoda -- for a while. It's good so far.
Posted by Steve Reed at 7:12 AM

The artwork on incense packets is very attractive, and probably hasn't changed for decades. Packaging is such a temptation sometimes. The last piece of packaging I glued in my journal was the two foil covers of some Suba instant noodles that we had for lunch the other day. The foil shows how to prepare them. The plastic lid has holes in so that after a few minutes you can pour the boiling water out and add the sauce. The lids have a warning that it will be hot. They don't have a picture of some poor fool nearly burning their hands which is what I nearly did. And they don't have a picture of someone using a tea towel in an attempt to stop burning their hands. Quite tasty noodles though.
Orchids amaze me. When they bloom the flowers last for at least a month and they don't seem to need much to carry on living. My one like yours was also from the street.

"A Drop of The Hard Stuff" and "Hope to Die" seem curiously appropriate titles for a pandemic. Also the author's name - Lawrence Block - seems a good name for a lockdown. Block also wrote some other pandemic-appropriate books - "A Ticket to the Boneyard" (1990), "A Dance at the Slaughterhouse" (1991) and "A Walk Among the Tombstones" (1992).

Oh, that look on Olga's face!

Your orchids are gorgeous and your incense box remains brought back a rush of memories of stuffy shops and stalls of long ago hippie travels. What did we actually like about those stinky sticks. I still have a box which was supposedly honoured by the Dalai Lama himself. It's plain yellow and white and the sticks are possibly disintegrated by now. I don't dare touch it.

You definitely have some characters there. It hurts to see books badly tended to like that. I don't understand how folks can do that. Your orchids are gorgeous. Such beautiful colors. You stay safe and have a wonderful day, hugs, Edna B.

One wonders about people who don't mind being different. Do they get dressed and look in the mirror and think, "Good look!"? I love that they have their own style, their own sense of being. So many of us just want to fit in or at least not to stick out too much.
How I wish my orchids would bloom like that! I only have the two and one of them is about to bloom with its paltry four buds. I have no idea why they are so pathetic. Am I supposed to be fertilizing them?

Imagine an introduction of Bathrobe Woman to some of Mitchell's Fuengirola plaid-impaired gentlemen... :)

the orchids are so pretty.

and what this world needs is more people like the bathrobe lady. for some reason I'm reminded of the French film King Of Hearts. have you ever seen it?

You made a good post from the trash. Interesting how you followed up on your find and it lead you to more interesting stuff.

There are certainly some snappy dressers in London these days. Those orchids are gorgeous. I'm ashamed to say, I've never gotten one to bloom a second time.

You could email that photo of the ruined book to the Montreal Public Library system:
"I found your property".

I have a friend who dresses unusually--makes hats out of cardboard boxes, and the like. I always figured she turns up on people's social media, like this woman here.

A fascinating collage of photos. Love the orchids! And Olga, of course.

Your orchids are wonderful. Mine never ever bloom again, so out they go. I love that photo of Olga.

I'm usually a pink flower fan, but I really love those orange orchids! And Olga is giving you some SERIOUS side eye. Ha!

Your orchids are beautiful. You are kind to the plants to rescue them and are thus rewarded. Being house bound makes me appreciate mine even more.

Do you think the creative dressing helps to maintain the 6 foot rule?

The Mandalorian sounds interesting but I chose to subscribe to Acorn for all the British mysteries.
Continue to enjoy.

That orchid is gorgeous and I love that the woman in the bathrobe is walking around without a care...I wonder if she is all there? Enjoy your weekend.

Sarah: When I was in Morocco I used to save a lot of product labels in my journals. They were so intriguing, particularly with the Arabic script. It's amazing how often I find orchids being put out with someone's trash!

YP: It DOES seem like appropriate reading. I've never read a Lawrence Block book. I'm not sure I've even heard of him before now.

Mitchell: GIVE ME MY KONG!

Sabine: Dalai Lama incense is pretty impressive, disintegrated or not! I definitely felt like this was a remnant of the hippie years. And yes, I don't know how I ever tolerated incense. Ugh.

Edna: I don't understand it either. I was always taught to respect and care for books.

Ms Moon: We have orchid food but I think we've only fed ours once or twice in five or so years. We water them weekly, let them drain entirely, and then ignore them!

Mary: Ha! We do have some interesting fashionistas in our midst in blogland, don't we?!

Ellen: I have not! I'll look it up! I admire her, too. She's definitely doing her own thing.

Sharon: Up until about five years ago I never had luck with that, either. But then suddenly it began working for me. Not sure why.

Fresca: I bet she does! Somehow I don't think this woman would mind being on social media. I think if she dresses like that she kind of has to expect it, you know?

Catalyst: Thanks! It's been a good orchid year.

Robin: She is a character!

Allison: If you keep them in a semi-sunny spot (morning light, not too hot), water them weekly but let them drain completely, and keep them out of standing water, they'll come back with another round of blooms. Try it!

Bug: The orange ones are very unusual, aren't they?

Cheryl: I don't know Acorn! I'll have to look into that! Of course we get a lot of the British shows anyway on the BBC iPlayer.

E: I'm not sure about the woman. She seems to function just fine -- she's always out doing her shopping and whatnot. I think she's just eccentric.

Padre: The Kong is king!