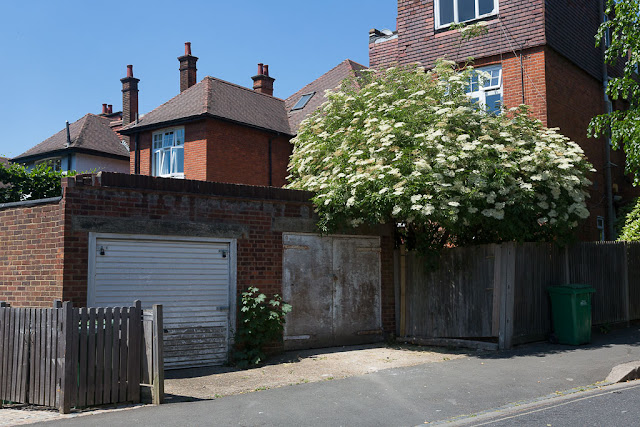 Here we are in beautiful Los Angeles -- oops, I mean London. We are seriously having L.A. weather, though. Every day the temperature is in the 70s or 80s, the sky clear as a bell, the sun blazing down. It's quite comfortable and beautiful (not to mention great for drying laundry), but it's just so not England. Apparently this is the sunniest spring since anyone began keeping track of these things, in 1929, as well as the driest May in 124 years. April set records, too. Farmers are worrying about their crops.

We're watering the garden every single day. I always worry about watering things too much, but in this weather that's probably not possible. No one's talking about a watering ban yet, but if we don't start seeing some rain I suppose that could happen. None is in the forecast until June 10 at the earliest.

Above you'll see an elderberry tree down the street from us, in full bloom. We have elders at the back of our garden, too, but they're all entwined with ivy and rambling roses so they don't make a very clear picture. We also had elders in our yard when I was growing up in Florida -- as a kid I dug one up and put it in a pot and named it, for some reason, "Shorty." (Probably because it never grew very tall, being an unhappy and slowly dying plant.) I believe the Florida and UK varieties are even the same species, Sambucus nigra. 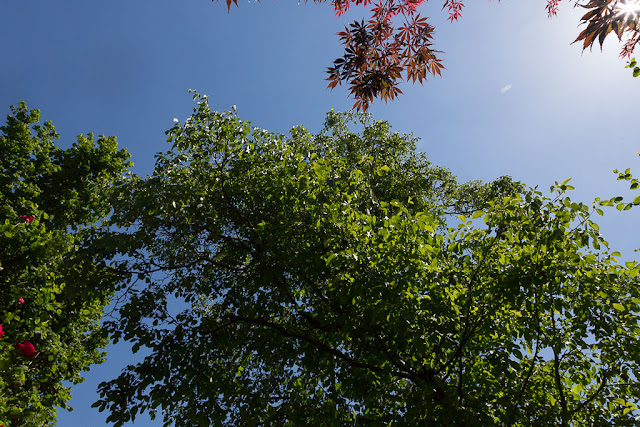 This was my view yesterday morning as I lay reading on a blanket in the garden. I was looking up into the branches of our walnut tree -- the messiest tree ever, constantly being ravaged by squirrels and raining down leaves and half-eaten nuts. It's still beautiful, though.

I'm reading "Lincoln in the Bardo," which is a good but very strange book. I admire an author who can take on such an out-there subject (the afterlife of Abraham Lincoln's young son Willie). 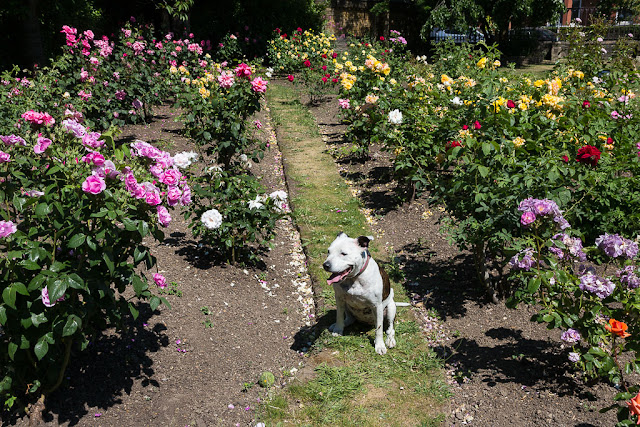 Here's the obligatory dog photo of the day, taken on our walk to the cemetery. We only rarely explore the rose garden there, but with everything in bloom, it seemed a good time to visit. Olga posed very patiently even though she would much rather have been walking around with her yucky tennis ball in her mouth.

We've been watching a Belgian TV show on Netflix called "Into the Night." It's a bizarre premise -- a small group of people must remain on a night jet flying ever-westward to avoid sunlight, which is suddenly killing everyone on Earth -- but we're enjoying it. It's a fun diversion, although it's a nightmare to contemplate having to essentially live on a commercial aircraft, even one with barely any passengers. I might rather be dead.
Posted by Steve Reed at 7:06 AM