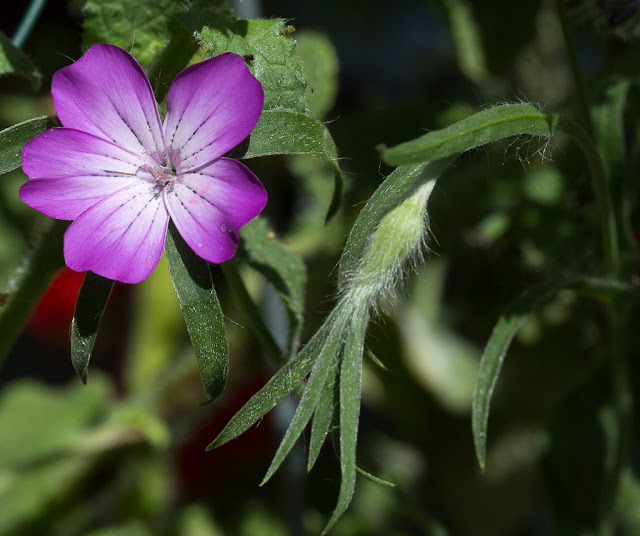 Yesterday I noticed a new flower in the big pot that holds our passionflower vine. I'd never seen anything like it elsewhere in the garden or even out in the wild. I thought perhaps it was a garden escapee from a neighbor.

But no! It's a corncockle, which used to be a common wildflower in Britain's wheat and cornfields but has become quite rare here with more intensive agriculture. In fact it was thought to be extinct in the UK until one was found in 2014. (That article plays up its poisonous properties, but apparently it's no more poisonous than a foxglove. You just can't eat it. Easy enough!)

So how did we get it? Beats me. Apparently it's occasionally included in wildflower seed mixes, and years ago we did scatter a seed mix in that pot. But I mean years ago -- 2015, to be exact. And no corncockles appeared immediately from that mix. It could have been in there and just remained dormant until now, I suppose, but I wonder if -- like the borage -- it came to us naturally, perhaps via some bird. (Or did the borage come from that seed mix too? Hmmm...)

When this one fades I'll collect the seeds and put them in our wildflower patch. Maybe we'll get more in coming years. Unless a second plant is needed for pollination -- that might be too much to hope for. 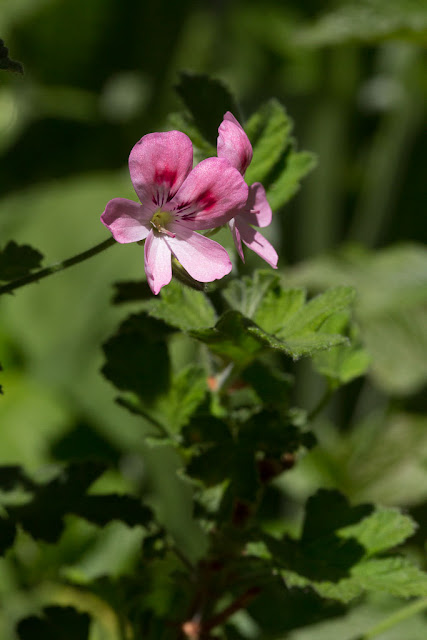 The pelargonium from the plant hospital has leafed out and given us flowers -- modest little pink things with a touch of lipstick-red. It's looking much better these days.

Can you stand hearing any more about foxgloves? You've already seen photos of ours. Well, you may remember that I handed out more than 100 seedlings last year to friends and co-workers. People have been sending me updates on some of those, and it's nice to see that the foxgloves not only stayed alive for them but bloomed as well. 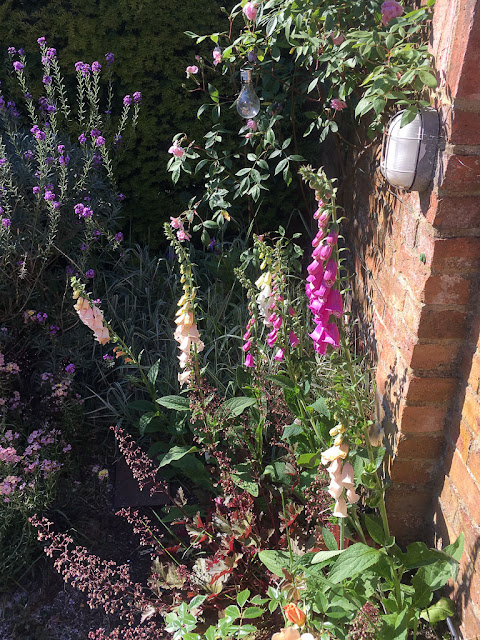 Blog reader Frances, in Harpenden, sent along this photo of her garden, with foxgloves from our seeds in full flower... 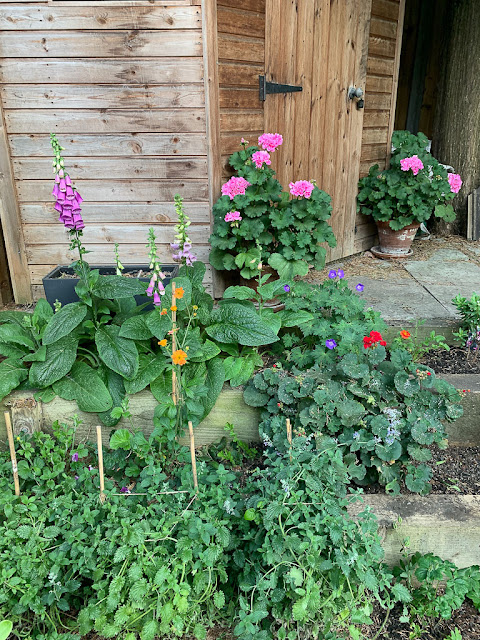 ...and my co-worker Colin sent this one. You can see the foxgloves upper left. 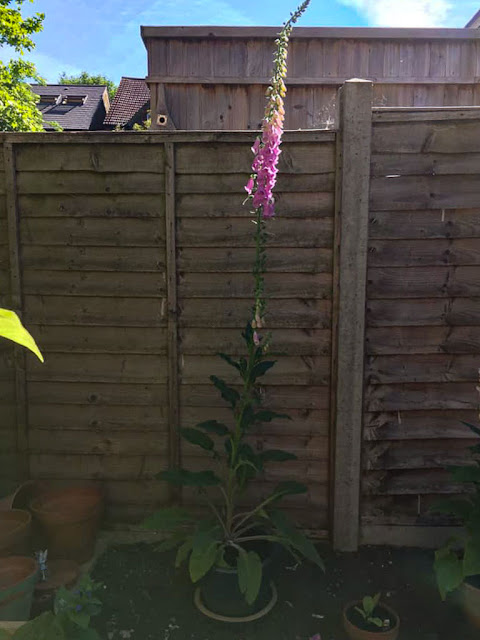 My co-worker Bambi wins the prize for the tallest foxglove, with a seedling that became this monster. I wasn't sure a foxglove would thrive in a pot but I'm glad to see it did!

In other news, a few days ago, Dave's uncle died of a stroke back in Michigan. It was quite a surprise as he was considerably younger than Dave's father, but he'd had a stroke before. Well, there was a gathering yesterday at the funeral home, and of course Dave was unable to attend in person. But his sister connected us via Facetime, so we were able to see the family and participate remotely. Because of coronavirus and the need for distancing only ten people could enter at a time, and everyone else waited in the parking lot, which is where we chatted with them. It was good to see them all, though it certainly would have been nicer under better circumstances. Another family event given a peculiar twist by Covid-19.

Speaking of peculiar, I got the strangest spam on my blog yesterday. I deleted it pretty quickly, but I have to mention it because it came from a guy named "Lord Mark" who was offering to turn me into a vampire! "Are you tired of being human?" his comment began. "Do you want to have power and influence over others, to be charming and desirable, to have wealth, health, without delaying in a good human posture and becoming an immortal? If yes, these your chance. It's a world of vampire where life get easier, We have made so many persons vampires and have turned them rich, You will assured long life and prosperity, You shall be made to be very sensitive to mental alertness, Stronger and also very fast, You will not be restricted to walking at night only even at the very middle of broad day light you will be made to walk, This is an opportunity to have the human vampire virus to perform in a good posture. If you are interested contact us on ----------@gmail.com."

Well, I'm glad I wouldn't be restricted to night-walking. That would be a drag. All the same, I think I'll pass on the human vampire virus. I have enough viruses to worry about already.
Posted by Steve Reed at 6:52 AM