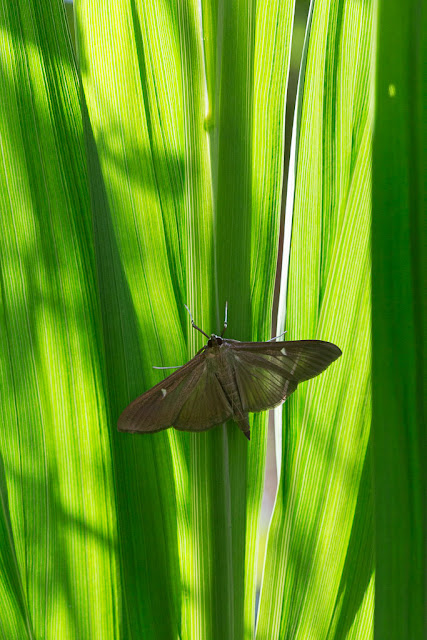 I was intrigued when I came across this moth on our crocosmia Friday morning. I took some photos, loving that morning sun coming through the leaves, with the intention of identifying it later in the day. By the time I got around to looking it up, the moth was long gone -- and I realized it's the brown variety of a box-tree moth, an invasive species first reported in England in 2007 and now a serious pest of box hedges and topiaries.

Oops. Guess I shouldn't have let it get away!

We don't have any box, so what it was doing in our garden is anyone's guess. I photographed one last year, too -- the white variety. 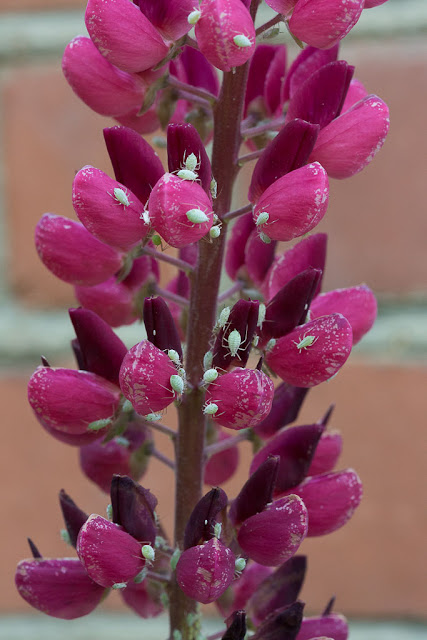 Here's another garden pest -- aphids. The ones on our lupines are huge. Kind of a horror show, right? I knock them off every now and then, but in this case the flower spike is quite old and on its way out, so I've been lax.

We also have caterpillars of some type rolled up in the leaves of our fig tree. Sigh...

We don't spray pesticide, so these sorts of critters are bound to turn up, I suppose.

I also discovered yesterday that one of our roses has a pretty severe-looking case of rust, which is a fungal disease. I took off a lot of the diseased and dying leaves but I may have to spray fungicide to get that under control. I hate to do it, because I want mushrooms and other naturally-occurring fungus in the ground, but now that the landlord has told me these rose bushes are decades old I feel a sense of responsibility to keep them healthy.


On a happier note, here's a short series of videos sent to me by our dog-walker, Francisco, showing Olga out with her pals. It's fun to see her interacting with him and with the other dogs, which of course I never get to see in real life.

I took her to the vet yesterday for her routine shots, and I mentioned to the vet that she sometimes seems stiff and reluctant to walk. The vet checked her out and said Olga has some arthritis in several joints. So we're going to try to give her low doses of anti-inflammatory medication to see if that improves how she feels. (She's already on glucosamine, which seemed to help a lot initially, but its benefits have faded somewhat in the last week or two.)

Though seeing patients during the pandemic, our vet asks the humans to stay outside while the pet is taken in for examination. So I found myself hanging around the front of the building in the rain while Olga got looked over. Fortunately I had an umbrella!
Posted by Steve Reed at 6:31 AM

I suppose you know them as ladybugs or ladybirds too, and you can order them by mail and they just love to eat aphids.
It is not just humans who have ageing issues.

Where is the short series of Olga videos? It is outrageous that you play with your readers like this - promising Olga videos and then deliberately failing to provide a link. I have spluttered cornflakes all over my keyboard.

YP: The video should be embedded in the post. Do you not see it?

Poor Olga. All our dogs, all golden retriever variations, over the years for arthritis as it is apparently common in these breeds, even in the mongrel types. It was painful to watch at times so I really hope Olga will benefit from the anti inflammatory meds.

As for the mildewed roses and the aphids, I use organic washing up liquid for both. I make a very very soapy foamy mix with water in a small bucket and literally wash the plants with my soapy foamy hands and/or dip entire branches in it. No need to wash it off as long as it's organic.

Another good remedy is to mix neem oil with some water and spray it on the mildew. Best look up about proportions. Neem is good against lots of pests.

I can see it now Steve. Thanks for embedding it. Olga is so sociable and at ease with the other hounds.

I would have a panic attack if I had to walk that many dogs at once. But Francisco seems to have things well in hand. No pun intended. Olga looks very happy. I, too, hope that her new meds help her. From roses to dogs to humans- we all need a bit of help with remedies sometimes, don't we?

Fun Little Insight There - She Is Such A Pretty Girl - Nothing Like A Happy Pack Of Dogs - If You Have Access, Research CBD Products In Your Area - The Advantage Is Anti-Inflamitory Properties - The Byproduct Is Elasticity In Ligaments, Which Reduces Tightness In Her Joints - Plus, The Ratio Of Smaller Doggie Portions Equals Longer Lasting For The Value - Anyway, Happy Trails And Enjoy The Week Ahead

yes, insecticidal soap is good for getting rid of some pests. and Olga is a happy dog. I wonder that he lets the leashes trail behind some of the dogs like that. I'd be afraid they would get caught of stuff.

I love seeing happy dogs out running and walking; they're definitely pack animals.

I can empathize with Olga, my joints ache a fair bit now too. Our beagle has spondylosis in her spine, bone spurs, and she's having a lot of pain from it. She's on an anti-inflammatory which helps but she's still sad.

Aphids are the reason I gave up trying to grow lupines. Didn't matter what I did there were so many aphids.

I loved the video of Olga and friends out for a walk. Francisco seems to enjoy his work and has a good rapport with the dogs. I'd be so afraid I was going to lose one of them.
Back when I could walk at the garden at will, I used to see batches of aphids on some plants every now and then. I always wondered if they had a system to control them. They must have some sort of method.

It's great to see Olga out with the other dogs. Looks like she's having a good time.
I've been out dead-heading the roses and noticed leaf fungus. I've been cutting away the leaves, but maybe I should try some other way of getting rid of them. Ugh.

Have you tried spraying the plants with soapy water? I copied this from Google.
"A few tablespoons of liquid dish or insecticidal soap diluted in a pint of water is the simplest way to make a natural aphid killer spray for that aphid infestation. After mixing the water and soap mixture, fill up a squirt bottle, take a dish sponge and head out to your garden."
That video of Olga and the other dogs was fun. She gets along rather well with all the other dogs. My little guys has some arthritis too. This is when his stroller comes in super handy. He can still go everywhere with me. You have a great day, hugs, Edna B.

Great to see Olga with her pack, what a lovely dog walker, so in tune with his charges. The dogs are very happy, and that makes us happy.
We had aphids, not quite as chubby as yours, I bought two boxes of ladybugs, they all flew away, our aphids must have been too spicy, living on nasturtiums.

I'm amazed at how the "walker" can keep track of that many dogs at once and control them.

Olga IS a good girl!! So sweet when he called her and she came and sat for her treat :) I can sympathize with her aches and pains. It's no fun.

Those are some honkin' big aphids - wow!

It always warms my heart so see dogs romping around and enjoying life. My bug problem with my plants this year is Japanese beetles. They are destroying a lot of things. I am trying natural remedies and they have worked somewhat. It is annoying to have them come in and do so much damage.

That’s a lotta dogs! Of course, Olga is the loveliest of them all!

Andrew: We've tried ladybirds, but the problem is, they just fly away! They don't hang around! Francisco is a nice guy but I always think he needs to eat something -- he's so skinny. (From all that dog-walking, I suppose!)

YP: Olga is mostly indifferent to other dogs. She gets along with them OK but she's essentially a loner. (Like me!)

Sabine: I have used washing up liquid for aphids, and it does work. I haven't tried it for fungal problems, though. Maybe I will.

Ms Moon: And that's a small group. Some dog walkers take a lot more than that. I agree -- I wouldn't want to be responsible for them all!

Padre: I just noticed a shop on our high street which sells CBD products!

Ellen: I wondered the same thing. But Olga doesn't have a lead on her, so that's good.

Lilycedar: Apparently there's a type of large aphid that's specific to lupines. They apparently ARE delicious flowers. (To insects!)

Sharon: Sometimes just blasting the plant with water is enough. It knocks them all off.

Robin: Yeah, I don't know how serious it is. Depends on the fungus, I guess. Some of our roses get black spot every year, and they lose leaves, but it never seems to hurt them. I'm just worried about this rust because it's really taken over one plant.

Edna: Yes! I have tried that and it DOES work. After I took that picture I washed the plant down with water and that got rid of a lot of them.

Linda Sue: We've bought ladybugs several times and they always take off after we set them free. (Or get eaten.)

Catalyst: Me too! I wouldn't want that job. I have enough of a challenge with one dog.

Jenny-O: The best way to get Olga to respond to commands is to feed her. She is VERY food-motivated.

Michael: Hmmmm...I don't know those beetles. (Fortunately!) I'll have to look them up. Maybe we don't have them here?

Bug: That's actually a small group for a dog walker. Some walkers take almost twice as many.

That video was heartwarming. Great to see Olga and her pals so happy.

Oh, the bugs. We have a constant battle. Scale, aphids, white fly... it's always something. We have a big fat cactus with scale that Jerry has to clean off with cotton swabs every couple of months. Currenlty our hibiscuses have bugs (very common), but they're dropping buds as a result. Next!