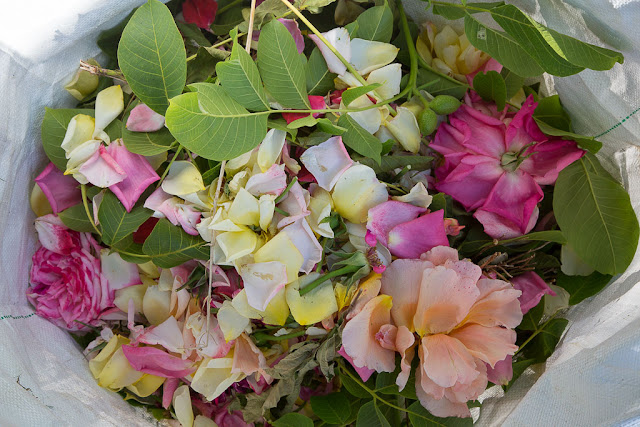 We're at the time of year when the yard waste bag looks almost as pretty as the plants in the garden!

I slept until almost 7:30 this morning -- which, for me, is late. I think I wore myself out yesterday. Among other tasks, I walked to Homebase and bought a cordless hedge trimmer on a pole. (Now THAT's a sentence I never expected to hear myself say!) It will help us maintain the monster, as we have dubbed the neighbor's rambling rose that cascades over the fence onto our patio during growing season, as well as other shrubbery and tree cover that in the past we've called a tree service to trim. Maybe in the long run we can save some money doing it ourselves.

I also cleaned like crazy, did our grocery shopping, repotted some plants, had our blankets laundered (our local laundry has started doing service washes again -- yay!) and went to the pharmacy to buy a tube of Dave's fancy facial cleanser. I don't remember the name but the label is in French, so it must be fancy. 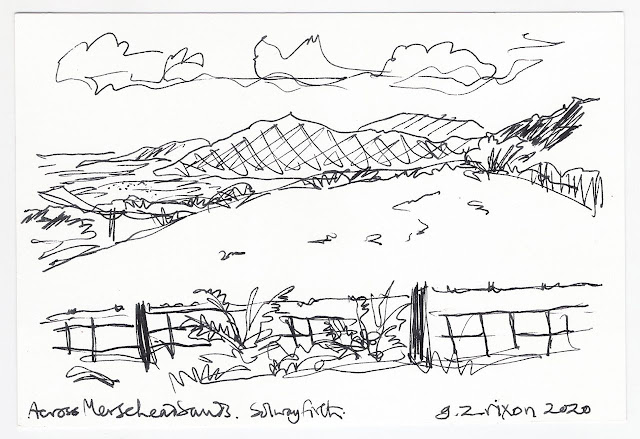 Here's the latest addition to our art collection -- a Gwynneth Rixon original! It depicts Mersehead Sands near Solway Firth in Scotland. I bought it from Gwynneth's Etsy page, and propped it up in our dining room. We bloggers must support one another in our creative endeavors!

Maybe one of these days I'll actually get up to that part of Scotland. I believe Mersehead is a preserve administered by the Royal Society for the Protection of Birds. Sounds like a good place for photography. 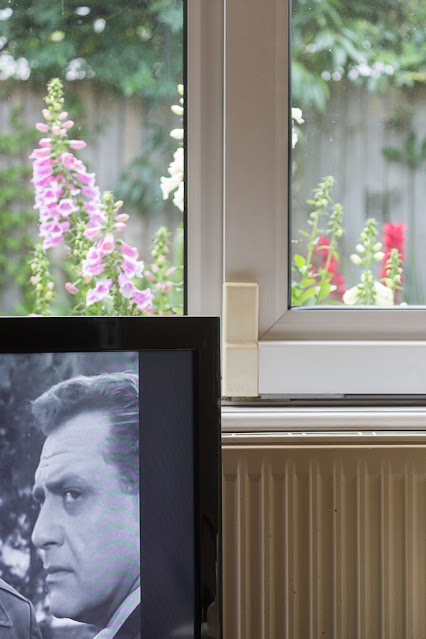 Last night we watched, among other things, "Perry Mason" -- which just never gets old. I love spotting all the actors who play bit parts in that show and wind up going on to bigger and better things. I found a fantastic website that is just full of Perry Mason trivia, from listing participating actors (Cloris Leachman, Barbara Eden, James Coburn -- practically anyone who was doing television in those days) to tracing the appearances of all the extras who sit in the courtoom galleries during trial scenes. Last night I had to pull out my "Valley of the Dolls" DVD to show Dave that both Naomi Stevens and Robert H. Harris, who we'd just seen in Perry Mason episodes, were together in a single scene in that movie. Not that he cared. I'm the only one in this household who keeps track of these things.
Posted by Steve Reed at 8:29 AM