A Pink Car and Pink Wine 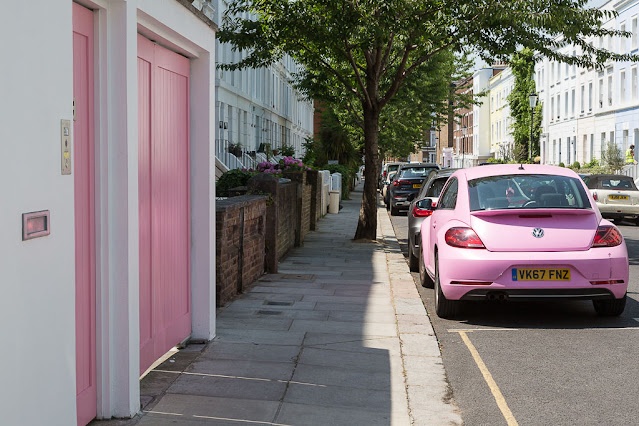 By British standards, it's hot out there -- 88º F (or 31º C) yesterday afternoon. Which doesn't sound that hot, at least not to an old Florida boy like me, but it definitely feels it. I guess the fact that none of us in the UK have air conditioning is part of the reason.
I didn't exert myself but I did run some errands -- including going to the post office twice. Which is ridiculous, since I can probably count on one hand the number of times I've used the post office in the last year. It was all due to bad planning on my part. 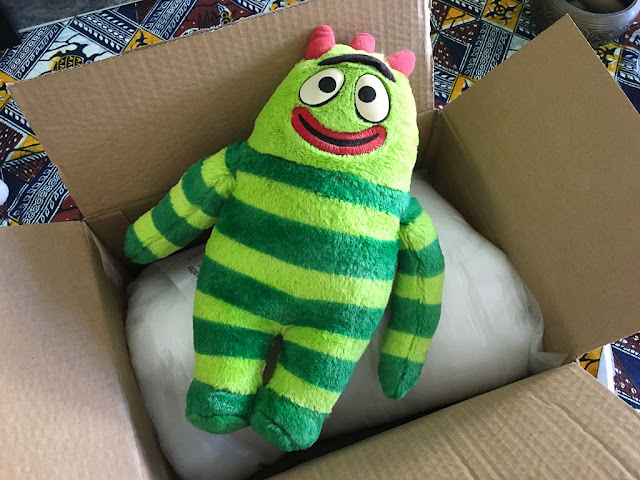 In the morning, I mailed Brobee to his new owner, a pal who recently lost a family member to Covid-19. I wrote a card telling her the whole story of how I rescued him, and fortunately this person is someone who will appreciate that tale. Hopefully he'll help provide some silly positivity at a terrible time.
And then, in the afternoon, my eBay auctions ended, and the old pharmaceutical bottles sold, and I had to get those in the mail. (Of course if I'd waited I could have mailed everything at once, but I forgot about the eBay thing.) So I packed them up and trudged back to the post office, and wound up spending £14 to mail bottles that Nigel in Wales paid me £6.85 for (including shipping).
I am the world's worst eBay seller. I seem to lose money on every transaction. Which is why I almost never bother with it. But in this case it allowed me to find a new home for those bottles, which was my overall goal.
My Bovril bottles didn't sell, but that's OK. I kind of like them.
I bought some fresh turbot for dinner from one of our local seafood restaurants that is doubling as a market until they can seat patrons again. I also bought some samphire, which goes so well with fish, and a fancy bottle of rosé Sancerre wine. We had a special light summer feast.
(Top photo: A pink car in Notting Hill, to go with my pink wine. Surely it belongs in that pink garage?)
Posted by Steve Reed at 6:08 AM

What a very kind and lovely thing you did with Brobee Steve! It proves that you are not such a bad guy after all! Besides, is there are room in the world that would not be enhanced my a smiling Brobee? Such a sophisticated plaything for discerning owners of cuddly toys.

As a new reader, I didn't realise you were from Florida. This time last year we were touring Britain and how we suffered in the heat, and yes, because of as you say, a lack of air con. In spite of me asking the question of our tour company and being assured all our accommodation had air con, at least half the places didn't. The Tube was stinking hot as usual.

It's a nice story about Brobee. I expect you are right about the pink car and pink garage.

I love that pink car and garage. We had an Isuzu Trooper and a canoe to match.

Brobee looks brand new. What a great project and a kind gift. It will be loved, I'm sure.

We have so much "stuff" we're constantly giving away. Friends are always telling us to sell it on Ebay, but I wouldn't want to take away your title (World's Worst). We have a wonderful charity shop just down the street and friends who regularly need things. I figure that costs me less than selling it all.

A wonderful gesture to send Brobee the Saved to your friend.

When eBay first started up I knew lots of folks who were going to make their fortunes on it, selling old stuff. I don't think any of them ever made much at all. But I'm glad your bottles got new homes.
You ARE A good man, Steve. That's all there is to it.
And that pink car (Porsche?) is what I'd call Pepto Pink.

Brobee looks fantastic...in fact he looks brand new. That's very nice of you to send him to a friend in need of a lift. I used to buy things on eBay but I haven't in at least 6 or 7 years. However, I never attempted to sell anything. I'm sure I wouldn't be any good at it. Love that pink car!

Aw - Brobee looks fabulous! You're such a good friend. Which reminds me that I meant to send a friend a thank you gift eons ago & I still haven't done it. Better hop to it!

I actually love the pepto pink Bug (but of course I would). I always wanted a VW Bug :)

You did such a fine job rescuing and restoring Brobee. So kind of you to mail him to a friend who lost someone to Covid.
My mom would have loved that pink car!

Brobee looks awesome! I'm sure he's going to bring some comfort to his new owner. Did I ever mention what a super nice person you are? I love those pink doors. The first time I ever saw pink houses was on a trip to Sweden. I still think they are pretty. As for selling, I can't sell my way out of a paper bag. I can show you how to do it, But I can't do it myself. Go figure! You have a wonderful day, hugs, Edna B.

I'm sure that getting a package in the mail, from overseas, with a handwritten origin story to boot, will bring a lot of solace to your friend who is hurting. Mail is always, still, and forever, a little magical. That was a kind thing to do.

Hold. The. Phone. There is such a thing as rose Sancerre??? When did that happen, and why was I not notified? Sancerre is the only white wine that my husband will drink, and I won't go near his reds, so rose Sancerre sounds like it could be a whole new adventure for us. (Obviously, we don't have a high bar when it comes to "adventure".)

LOVE the play on pink today. It's a perfect Friday view. Have a great weekend.

Brobee looks fabulous, what a good job and a kind hearted thing to do, I KNOW that she will appreciate it! Everything about it, the finding, the remaking, the stitching and the sending...and the lovely thought!

The pinkables are DEE-vine! I think that the heat in London is more intense for some reason...I remember being there in the summer - thought i would die, but just outside of town the temperature was do-able.
Again, Steve, well done , a most thoughtful kindness , I heart you.

I think I even detected some pink color on the mail slot.

You remember Mary Kay cosmetics I suppose. Their highest sellers got a pink cadillac. I wonder if the UK is awarding a pink bug. Love the garage doors as well.

You are rather a sweet man x

You did a great job restoring Brobee to like-new condition. And what an important job you have given him.

I'd be afraid to sell stuff online too. I've just mailed the second of four books to my mother-in-law as a gift for her birthday and Mother's Day (long passed) and so far the postage has exceeded the cost of the books by 50%. You can look at your loss as a contribution to making the world a better place. My loss is just stupidity on my part - why didn't I buy earrings for her instead? Maybe because nothing was open except the grocery store, but still ... :)

I love that first picture of the car with the pink doors. and I think that is so cool that you rescued that stuffed doll, refurbished it, and then sent it out in the world. and what a great idea for the restaurant. people have to be flexible and creative these days til things settle down and maybe it will even stabilize into a new way of doing things. you for instance if you should not have your library job could be a refurbisher of other people's trash.

Well, you have nothing but time so what's an extra trip to the post office?

YP: LOL -- I'm not sure he's "sophisticated" but he is at least amusing.

Andrew: Even when they DO have air conditioning (rarely) it doesn't seem very effective. It never produces the same Arctic chill we get from air con in the states!

Mitchell: Yeah, honestly, I find eBay is often more trouble than it's worth.

Ms Moon: Remember the whole Beanie Baby craze? EBay was a prime place for buyers and sellers of Beanie Babies, as I recall. The car is a VW, I believe.

Sharon: It's the postage that always kills me. No matter how much I ask it's never enough!

Bug: I kind of like that pink VW too! VWs lend themselves to funky colors.

Edna: Notting Hill is full of colorful houses. Some streets have one after the other, all painted in rainbow colors.

Vivian: I'd never heard of rosé Sancerre either, but there it was! Not particularly cheap but good and worth it for a treat. The label is "Domaine Sautereau."

Linda Sue: I think the heat always seems more intense in a city. It's all the concrete, the baking effect. New York was like that too.

Catalyst: And did you catch the hydrangeas in the background? The whole photo is a symphony of pink!

Allison: I didn't even THINK of a Mary Kay connection! Don't their cars usually say "Mary Kay" somewhere on them, though? This doesn't seem like a very "Mary Kay" neighborhood.

BethB: My dad actually collected VW bugs while he was alive -- he owned about 20 of them over the years, I think!

Jenny-O: When I'm sending books to people I usually order them on Amazon and just have them shipped directly. Of course that precludes personal gift-wrapping or inscribing, but it's worth it.

Ellen: I'm impressed at the creative things some businesses have done to try to keep up a revenue stream during this crazy time. I would LOVE to refurbish trash for money! Maybe that will be my retirement!

Red: Well, that's true, but it's just ironic considering I NEVER go to the Post Office.