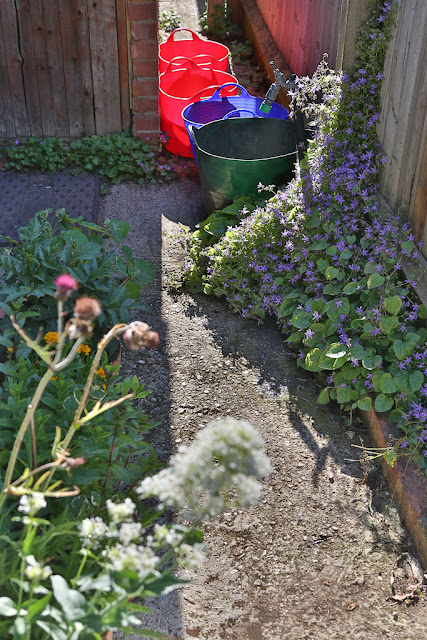 Dave has started collecting rainwater for our blueberry plant, which reportedly likes rain more than tap water. It has something to do with maintaining the acidity or alkalinity of the soil. Dave set these colorful trugs next to the shed at the side of the house, where they collect water that spills off the shed roof -- and look photogenic in the meantime.

We had some drama yesterday! Olga went out for her walk with Francisco as usual, and a couple hours later Francisco called me. (When I get a call from the dog-walker I always know something alarming is up.) Well, it turns out that Olga and another dog were running after a ball and apparently collided with each other. The other dog turned and bit Olga, and took a chunk out of her ear! 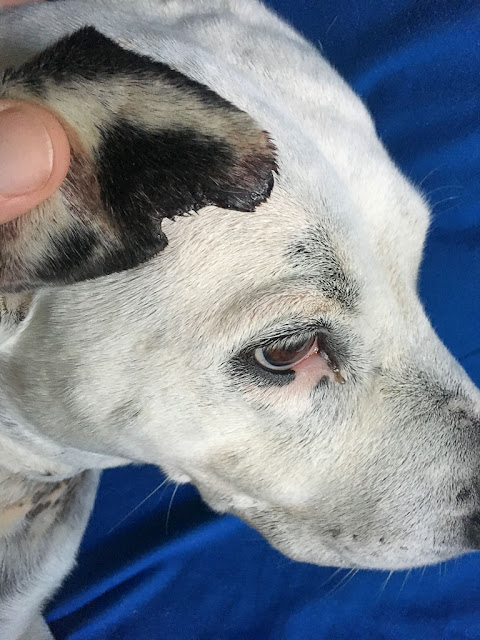 Francisco, of course, was mortified, and he cleaned the ear and disinfected the bite. Then he called us, probably thinking we would be livid at the disfigurement of our dog. But honestly, dogs are dogs -- they get in scraps every once in a while, and frankly I'm just glad Olga didn't start it. (Apparently she did get the ball, though!)

The other dog's name is Rufus, but we've taken to calling him Mike Tyson. Apparently Rufus will now have to wear a muzzle on his walks.
Posted by Steve Reed at 6:29 AM

Oh no! Poor Olga! I hope she's not in pain. She looks as if she's weathering this turn of events with equanimity. Scrappy girl.

Hope that Olga's heals OK. Has she got to wear the " cone of shame" or is she leaving it alone?

Poor Olga. I'm glad she's OK and that you have such a capable dog walker -- and that Mike Tyson will be required to wear a muzzle -- the spoiled sport. I'm also glad Olga got the ball.

You have got a good dogwalker there. Pity about her ear, but her character is more I portent than her looks !

Rainwater is best for plants. One caveat is that if the water comes of a roofing felt roof can inhibit growth, but still is better than tap water. Have you thought of asking your landlord if you could tap the downpipe from the (slate or tile I presume) roof? A quick job, into a waterbutt and tap off from the bottom. A cheap attachment available from a builders merchant, if you have plastic downpipes.

Aw! That's awful. As you are an impoverished school librarian, you should consider crowd funding for two reasons:-
a) To hire a hitman to dispose of Rufus.
b) Plastic surgery for Olga's damaged ear.

Over enthusiastic play. We used to indulge in that once upon a time but never bit ears, lol
Briony
x

Poor battle wounded Olga. Trugs is a word I do not know and I can't say I like the look of them. Our blueberry many years ago thrived on chlorinated tap water.

Oh dear. Poor Olga indeed! She’s still pretty, and as you say, dogs will be dogs.
Have to say I now feel a bit sorry for poor Rufus in his muzzle.

Outstanding Title - Don't Get Me Wrong, Yes, Wish Olga Girl Wasn't Hurt - What A Classic Post - Also, I Am Very Pleased With Your Response - This Situation Could Have Totally Been Blown Out Of Proportion - But Thanx For Taking The Higher Ground, Understanding Behaviors, And Seeking The Best Possible Outcome - As For The Blueberries, Chloramine Is A Disinfectant Byproduct That Most Berry Roots Have A Hard Time Processing - If You Fill A Clear Water Bottle Up With City Water And Set Out In The Sun For About 48 Hours, The UV Rays Will Break Down Those Chemicals, Then Pour Out On The Soil - Be Well This Week

Francisco is probably so relieved that you and Dave didn't lose your minds over poor Olga's ear. I'm sure that some people would. But as you say- dogs just do get in scraps.
Collecting rain water to water plants is a good idea for any reason. Good for you guys!
May Olga feel better soon.

Poor Olga...that ear looks nasty. Loved your photo with the flowers and the colorful rain buckets. Blueberries are my favorite!

I'm so glad Olga is okay. She probably thinks of the ear damage as a badge of honor. I agree, dogs will be dogs and a few scars along the way are going to happen. Collecting the rainwater seems like a good idea to me.

Once again, blogger posted duplicate comments. I deleted the second one. Have you noticed that blogger has been acting strangely lately? Every time I hit the publish button on the comments, it seems to take about three times as long to post and many times it posts my comments twice.

Ouch! That looks like it definitely hurts. Mike Tyson! How funny to be reminded of that.

Poor girl! I hope it isn't painful for her.

Give Olga extra cuddles from her fan-base. We all hate to see anything unpleasant happen to her.

I think all plants do better with rainwater. I had a rain barrel up until this year.

Oh, Olga looks sad. But just tell her it's nothing bad. I just had a notch taken out of one of MY ears for skin cancer. Stitches are out and Judy says the plastic surgeon did a good job of repairing the damage. I'm not the worse for the wear, as they say.

I feel sorry for everybody involved - Olga, of course, and you and Dave, and the dog walker, and even Rufus who must be muzzled. Hugs all around :) I wonder how many nerve endings there are in ears? Do people and other animals all have the same number? I have no idea.

Great idea to catch rainwater. The buckets look quite nice there.

I hope that that does not modify her ear flapping when she runs. Mike did get quite a chunk but not so much as to mar Olga's beauty. Sorry that that happened.Poor baby.

That's awful. I hope she is really OK. No chance the other dog had rabies--probably not. My niece has a three-legged boxer, a rescue who had been abused and had not had a trampled leg seen to; thus, the beyond-repair injury and amputation. My grand-nephew named the dog Tyson!

oh, poor Olga but poor Rufus too. one little lapse in the heat of the tussle and he has to be muzzled.

blueberries like acidity so I've been told. coffee grounds and composted peat are good additions.

Poor Olga. Our new dog, Heidi, who is so gentle and easy going, grabbed and killed a gopher last week, we now call her Fang or Killer.

37P: She doesn't seem like she even feels it. Which is her typical response to injuries. We always joke about how she has no nerve endings.

Frances: She's leaving it alone, thankfully. (And she can't lick it on the side of her head!)

Mitchell: I know! All that drama, but she WON!

GZ: We've thought about trying to put in water butts, but our downspouts are metal. I'm not sure how we could do it.

YP: Rufus was very contrite, or so I'm told. So a hitman might be a little extreme. LOL! As for plastic surgery, Olga would much rather have teat augmentation.

Andrew: I'd never heard the word "trug" until I moved to England, but that's what they're called!

Marty: Her battle scars will give her extra allure! I feel a little bad for Rufus too.

Padre: Good idea for ridding tap water of chlorine! I'll have to try that.

Ms Moon: Yeah, I could tell when he called me he was scared to death at first. Didn't know how I'd react.

Michael: It's really not THAT bad. (Easy for me to say, though, right? It's not MY ear.)

Sharon: Yeah, I just think when you own a dog you have to be prepared for canine disagreements. I'm not sure why you're having that double-posting problem. I've had other issues with Blogger recently, but not that one!

Robin: Isn't it funny? I'd forgotten all about that Tyson incident until this happened, and it popped right back into the forefront of my mind.

Jennifer: It doesn't seem to be, but it's always hard to tell with dogs.

Mary: Will do! (She would really appreciate extra treats. I'll give her a few of those, too. :) )

Red: Yeah, we've talked about putting in a more permanent rain barrel. Just not sure how we'd do it with our solid metal downspouts.

Catalyst: Well, I'm glad the surgeon did a good job! Probably a little more refined than Rufus's work on Olga. :)

Jenny-O: I have no idea either. Animals seem to damage their ears a lot in the real world, so I wonder if their ears have evolved to be less painful. Then again, they need to protect them from hazards and pain is the cue for danger, so who knows?

BethB: No, I'm sure the other dog was vaccinated, as is Olga. So no rabies danger. (Supposedly there is no rabies in Britain!)

Ellen: I know, I feel bad for Rufus! Coffee grounds is a good idea -- we've got TONS of those.

Lilycedar: Dogs can really transform when they're hunting! Olga killed a squirrel once and she was as shocked as I was!