A Caterpillar and a Monster 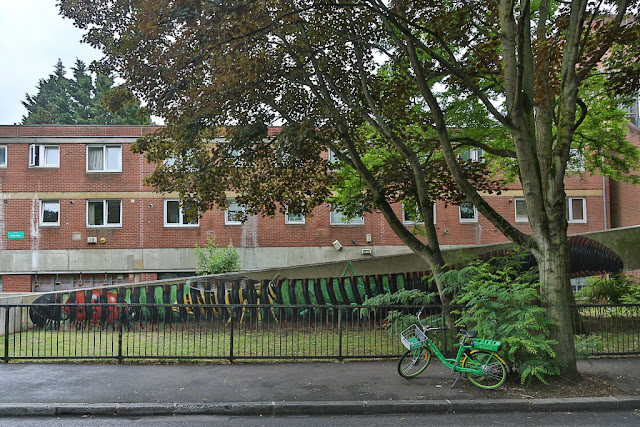 When I was out walking last Monday, I came across this street art on a housing estate in Kilburn. Isn't that fantastic? I hope you can see it past the fence -- it's a long centipede with a ladybug, a bee and a grasshopper inside it.

I photographed it that day, but it was really hard to get the right exposure because the upper left part of the photos was so bright, with all that sky, and the lower right was so dark, beneath the trees. So I went back yesterday morning while walking Olga and took some more pictures, including this HDR shot (above), which basically layers three different exposures to get the most range. 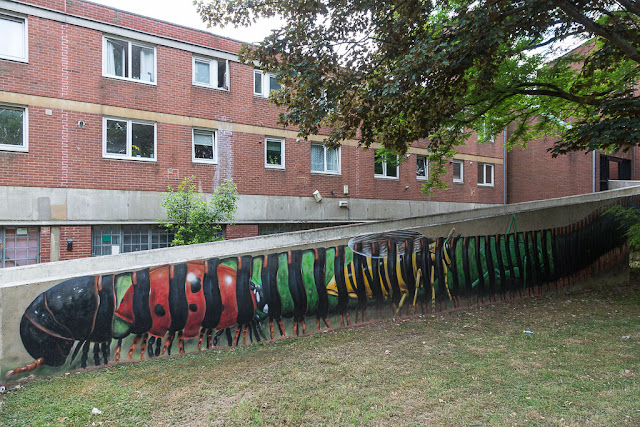 Here's another angle (not HDR). I have no idea who the artist is.

The area across from this estate is woodland, which borders some railroad tracks. As is often the case, lots of household rubbish had been dumped in the woods, on the other side of a fence running along the street. As Olga and I walked past, I spotted this guy among the debris: 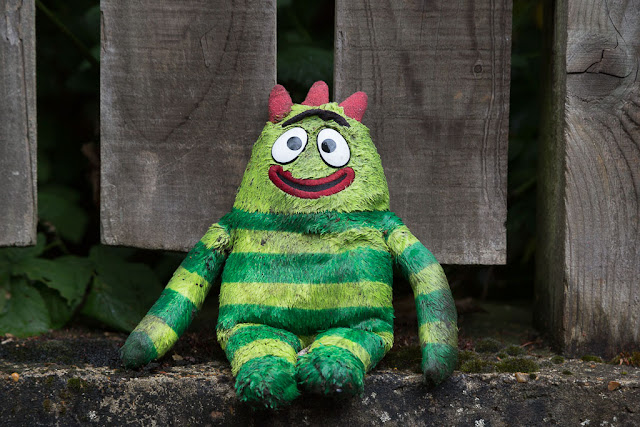 He was muddy and sodden, but basically intact. Later, through the magic of the Interwebs, I learned that he's a character named Brobee from a children's television show, "Yo Gabba Gabba."

Inspired by Sarah and Fresca, who have blogged about rescuing vintage stuffed animals, I thought, "I'm going to salvage this guy!" So I tucked him into a plastic bag and brought him home. I unstuffed him -- fortunately his back was handily sealed by velcro -- and found a plastic inner component that apparently once allowed him to make noises or speak. It didn't seem to work, and I threw it out. Let's keep things simple, shall we?

I ran him through the washing machine on "ready to wear," which seemed to be the shortest wash cycle. Unfortunately it also included a dryer cycle, which I hadn't intended, but it didn't seem to harm him except to slightly yellow his plastic eyes. He emerged clean and fluffy. 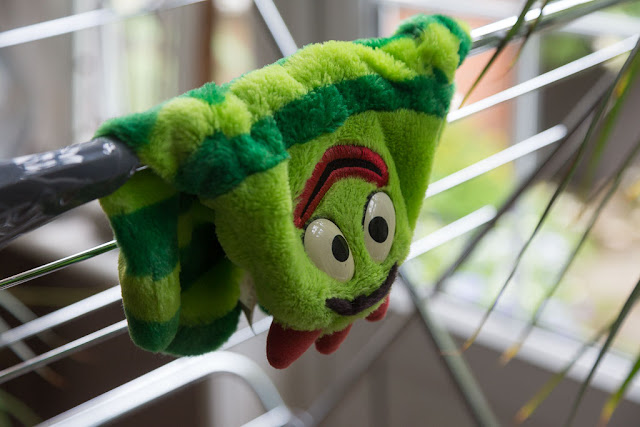 I ordered some new polyfill stuffing, and when that arrives he'll get re-stuffed. And then I have a plan for him.

See? It's not so hard to stay busy during lockdown!
Posted by Steve Reed at 6:32 AM