Greeting Cards, from Batik to Toonces 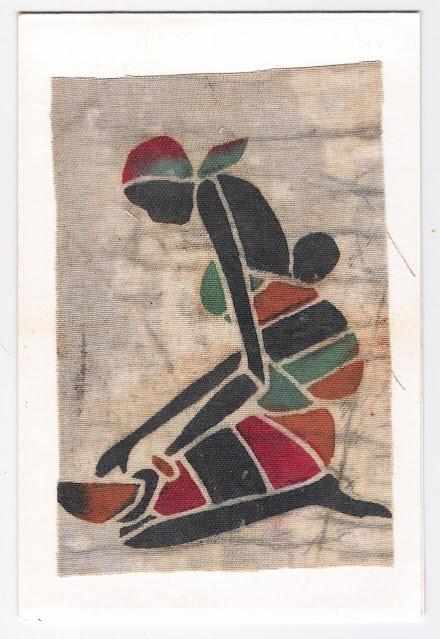 While going through my old paperwork, as I mentioned earlier this week, I came across a bunch of old greeting cards from across the years. I must admit I don't usually save cards -- and I rarely get them nowadays, since everyone's on e-mail and Facebook. But I kept a stack of favorites, and here are a few.


First of all, this card with a batik fabric face is one I wrote to my mom and brother on Oct. 6, 1994, from Ouagadougou, Burkina Faso, in West Africa. I was traveling with some friends at the time. In the card I complained about West African food ("really boring...there are almost no vegetables -- I feel like I eat rice and meat sauce all the time") but was enthusiastic about the Africans and their polite, relaxed society. Ouagadougou, I reported, "is a modern metropolis!" In fact, I wrote, "today I'm in a patisserie drinking cranberry (or something like it) juice and eating a croissant." 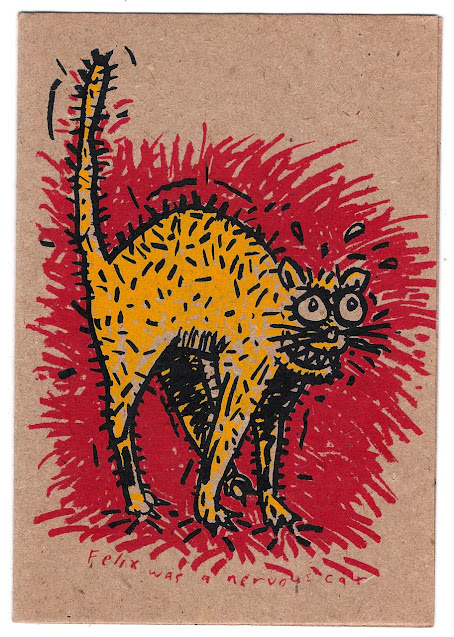 My friend Liz sent me this card, which she bought in Zimbabwe, in November, 1994. The "nervous cat" design is by Matthew Pinker. Little did I know then that Liz and I would travel to Zimbabwe together 12 years later! 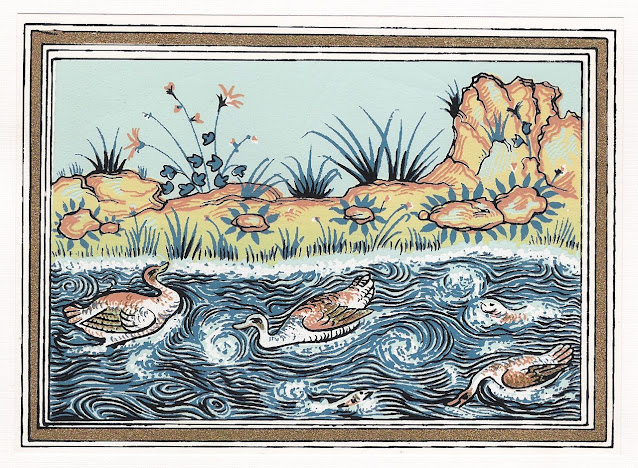 I mailed this card to my stepmother from Morocco in February 1994. The design is supposedly a miniature from Samarkand in the 1500s, depicting ducks. 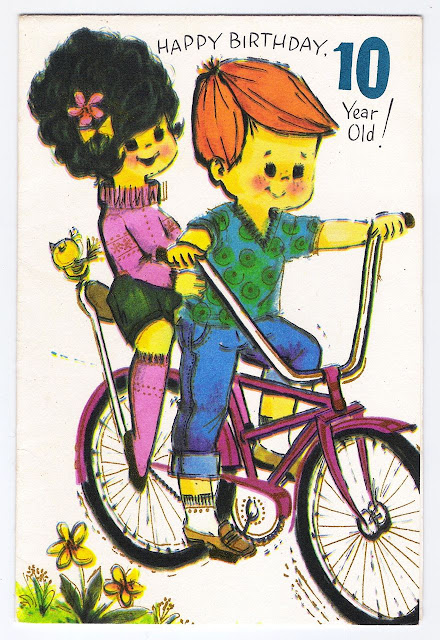 The woman who took care of me and my brother after school in the '70s, Mrs. Kirkland, gave me this card in 1976. She was like my surrogate grandmother, and she first got me into plants and gardening. My friends Barbara and John gave me this card in 1985, when I rented my first apartment. It's VERY '80s, isn't it? They bought it at University Square Mall in Tampa, and then had random people who worked in various mall shops (Sears, Spencer's, Burdines, Robinson's, McCrory's) sign it. 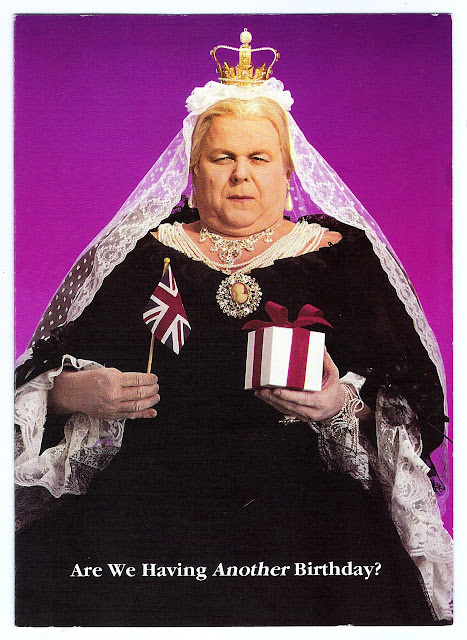 Inside message: "We are not amused."

This one's from my friend Kevin, for my 29th birthday in 1995 -- we've kept up a running gag about Queen Victoria for decades. According to the back of the card, the model is someone named "Brace Briskit," with casting by "Studmuffin & Assoc." 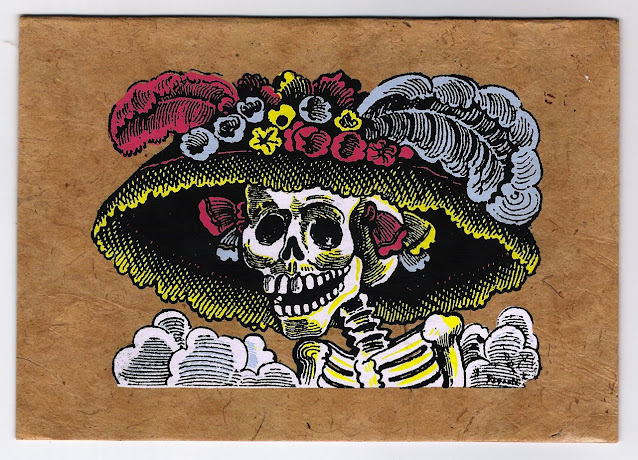 My friend Juliet sent me this great card in 2004. The art is by José Guadalupe Posada (1852-1913), reportedly "Mexico's most illustrious graphic artist," well known for his drawings and engravings of skeletons. 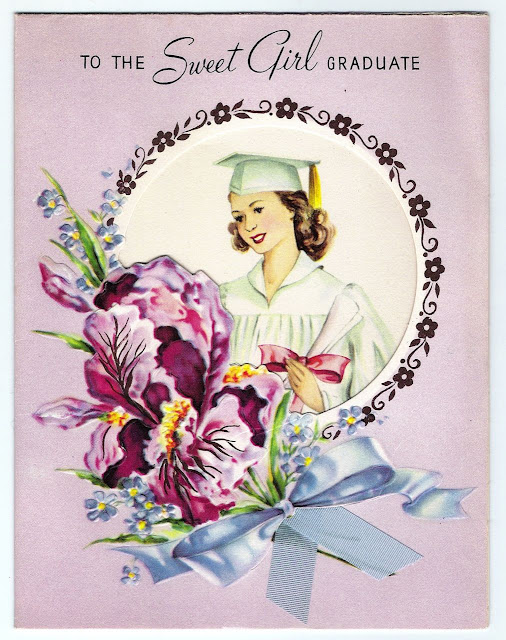 Obviously, this card wasn't sent to me! In fact it was my mom's, from her parents and brother when she graduated high school in the mid-'50s. As she was cleaning things out to move from our family home in 2015, she threw it away. I salvaged it from the trash can.

When I worked as a reporter in Polk County, Florida, in the late '80s and early '90s, I did a couple of articles involving a woman who kept a horse farm. Whenever she mailed me something, she decorated her envelopes so beautifully that I couldn't throw them out! It's not really a greeting card, but it may as well be. 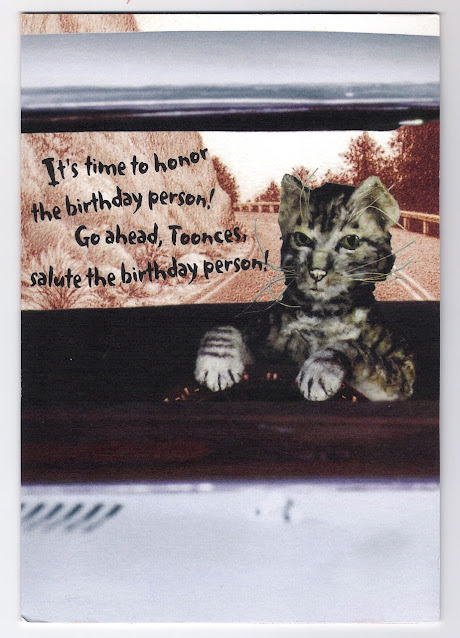 And finally...does anyone remember "Toonces, the Driving Cat"? This was a recurring Saturday Night Live skit in the late '80s and early '90s, in which a cat drives a car and of course... 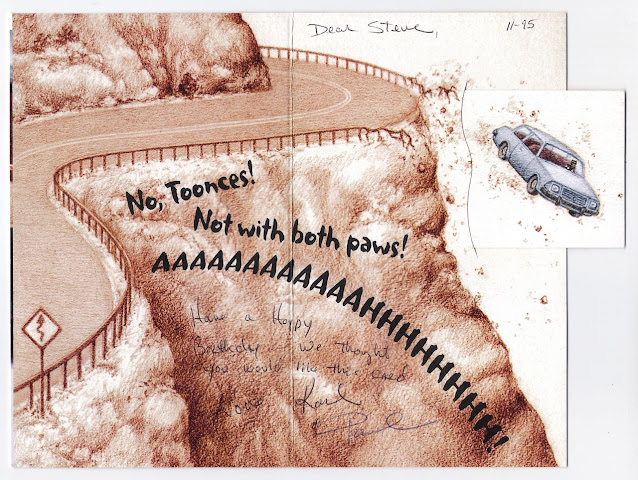 ...things inevitably go horribly awry. I was a huge Toonces fan, so my friends Karl and Paul gave me this card. When it opens, the tab with the car extends out to the right, sending it sailing into space!
Posted by Steve Reed at 6:20 AM