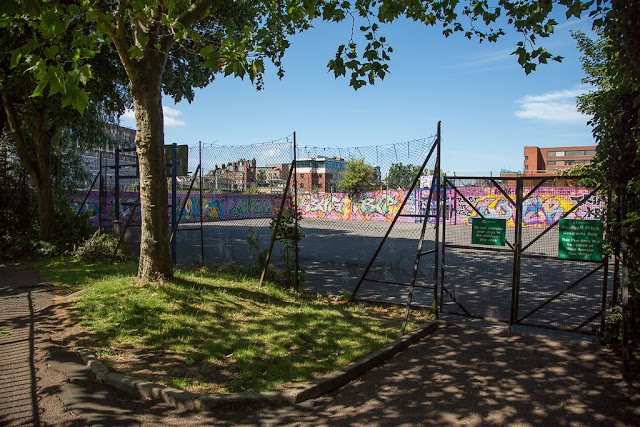 I noticed on Saturday that several graffiti painters were redecorating the walls of the basketball court at a nearby housing estate. The walls have been covered with graffiti for years -- I think it's permitted there, although I'm not sure of the terms -- and they were tagged and re-tagged and were looking pretty ratty overall. So the painters gave the wall a new coat of pink paint and put up some new pieces.

I went back yesterday to photograph them, but the gates to the court were locked. (The court is closed because of the coronavirus.) I saw the estate's maintenance man working nearby and asked him if he could open them so I could take some pictures. 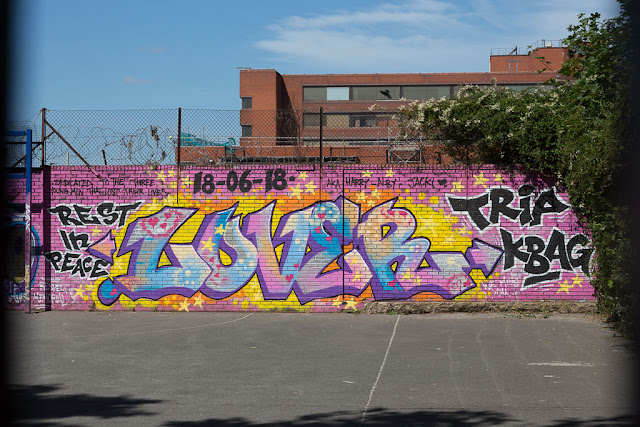 Well, we wouldn't want that. So I just took pictures through the fence.

Above is a memorial to three graffiti writers who were killed by a train a couple of years ago while painting along some railroad tracks in South London. It used to look like this, but now it's been freshened up. Trip, K-Bag and Lover were the tags the three used, and now those tags run all the way around the court.

I stuck my iPhone through the fence for a pano shot. Anyway, you get the idea!

I don't mind graffiti in this context -- it brightens up the urban environment. I think it's an asset, more properly termed street art, I suppose.

I'm reading a book called "The Devil's Cup," a sort of travelogue about the history of coffee. As an enthusiastic coffee consumer myself, I'm enjoying tracing its gradual rise from the wilds of Africa through the Arabian peninsula and into Europe. I'm struck by how much alcohol Europeans drank in the 16th and 17th centuries -- the book says beer thickened with eggs and poured over bread was a common breakfast, and there were beer breaks throughout the day, too (beer being much safer to drink than dirty water). "The average Northern European, including women and children, drank three liters of beer a day," the book says. When coffee made an appearance, Europe began to sober up -- and look what happened! The Enlightenment!

For Dave's birthday, I went out yesterday afternoon to a local bakery and bought a couple of big slices of cake -- salted caramel and red velvet -- and some birthday candles, which I deployed after dinner to my own appalling musical accompaniment. I also got him an extra present at the florist -- a canna lily, which we often see touted on gardening shows and will make a nice addition to the garden. We'll put it in a pot so we can move it to a protected location in the winter.
Posted by Steve Reed at 6:41 AM