A Cinnabar Moth, and Operation Highjump 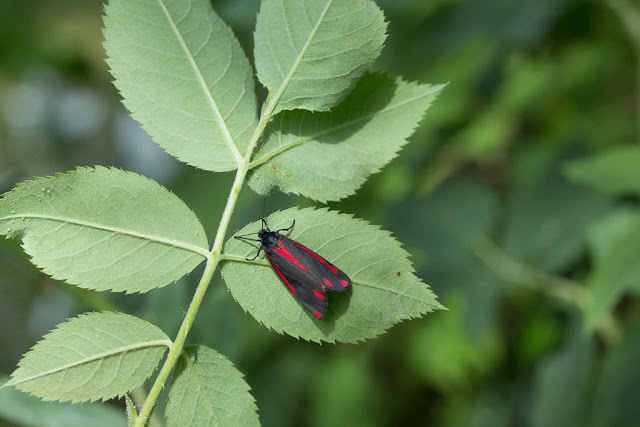 Big news in the garden!

Remember last summer, how we had the orange-and-black caterpillars of the cinnabar moth colonizing our ragwort plants? I was very excited about them, having left the ragwort -- which is their food plant -- specifically for them to live on. I mentioned at the time that although I'd seen the caterpillars before, I'd never laid eyes on an adult moth.

Well, guess what showed up yesterday?

I was sitting on the bench reading when I saw a flash of red in a sunny patch on the lawn. The cinnabar moth has red underwings, so when it flies, red is the predominant color you see. (Much like burnets, similar moths from another family that I've seen many times.) I ran like a madman to get the camera, and the obliging cinnabar moth stayed still long enough for me to shoot 111 pictures, from various positions and with various lenses. (Of course, most of those pictures will be deleted. I'm keeping only a handful.)

Obviously I don't know whether this moth was one of last year's caterpillars, or whether it was simply passing through to lay eggs on the ragwort (which we've allowed to grow again). Either way, I was glad to finally see one. They're not rare, but apparently they're usually nocturnal fliers.

In the morning I went through a box of old letters and other papers that I've saved over the years. I was looking for a particular old postcard from my great-grandmother -- don't ask me why -- and although I didn't find it, I came across some other interesting stuff.

As I think I've mentioned, my maternal grandfather was a scientist for the Naval Research Lab in Washington, D.C. In 1947 he went on an expedition called Operation Highjump to Antarctica, and sent home special postal envelopes like this one for himself, my grandmother, and their two kids (including, obviously, my mom).

I've never known much about Operation Highjump, but now, through the wonders of the Interwebs, the information is at our fingertips! Apparently it was a pretty large expedition, meant to test equipment and extend American influence in Antarctica, as well as establish a research base called Little America IV.

I never heard anything about it first-hand. My grandfather died when I was 10, and he seldom talked about his work at home, so my mom doesn't know much about it either. All we have now are these postal souvenirs -- which, by the way, are apparently abundant and not at all valuable, but are at least interesting.
Posted by Steve Reed at 6:45 AM