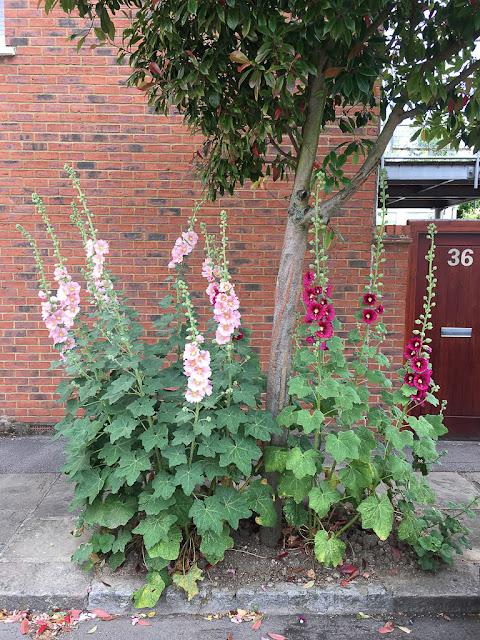 Yesterday was the most boring day imaginable, at least in terms of stuff to blog about. I almost didn't move off the couch, except to clean the bathroom and kill aphids on the lupines. (I caught up on all our magazines, though, which was something of an accomplishment.)

So, blog-wise, how about another bunch of random photos from the ol' iPhone?

First, some huge hollyhocks not far from our flat in West Hampstead. I continue to be mystified why some hollyhocks do so well on apparently neglected, streetside patches of dirt, and ours in our nurtured flowerbeds all have about four leaves. 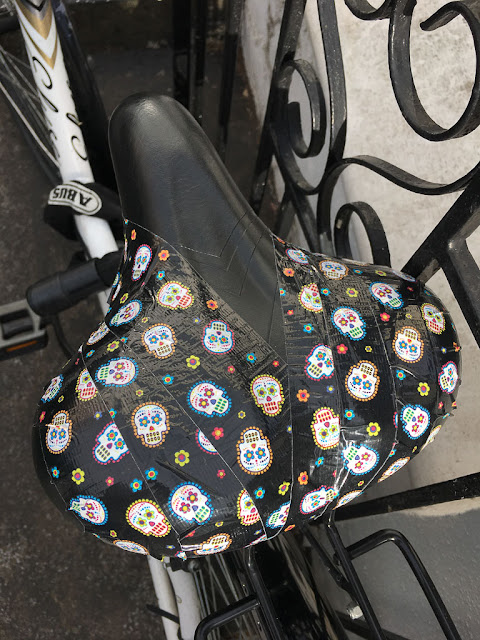 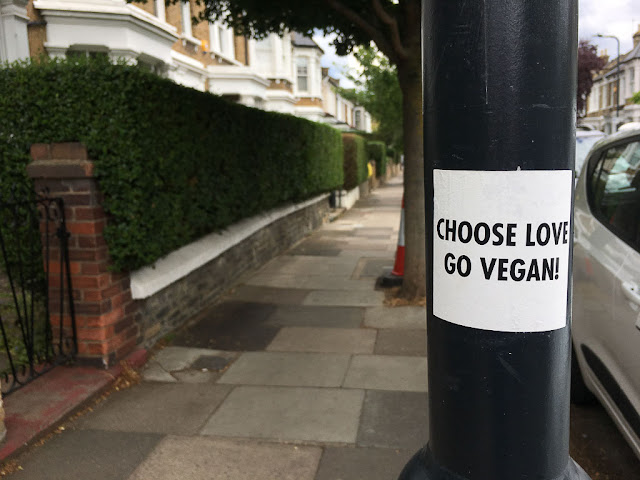 A sticker in Queen's Park. I could be a vegetarian -- in fact I was one for many years -- but I don't think I could do vegan. I like my dairy products too much. 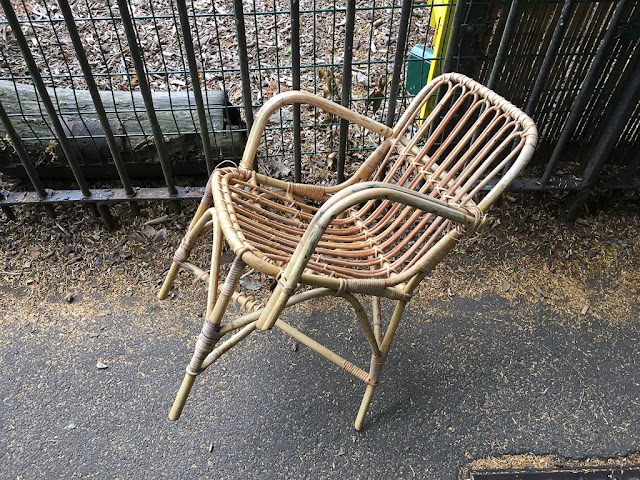 An old rattan chair with a broken leg, discarded on a pedestrian path. Once again, people, put your rubbish in a rubbish bin! 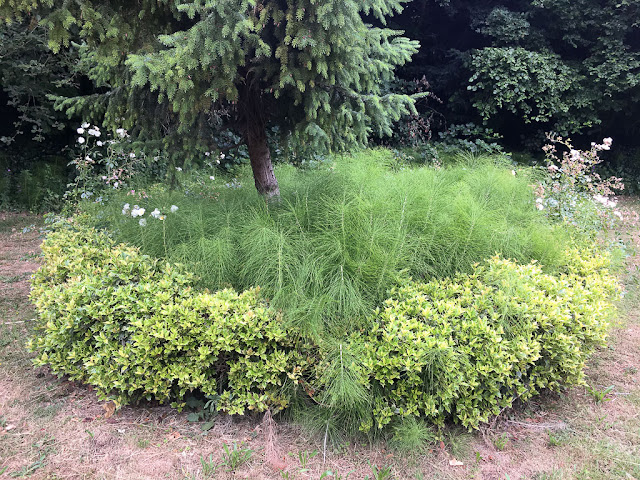 There's an area in the cemetery where the horsetails grow like crazy. They're known for being tenacious, troublesome weeds, which is why they've survived on Earth since the Paleozoic era, I suppose. 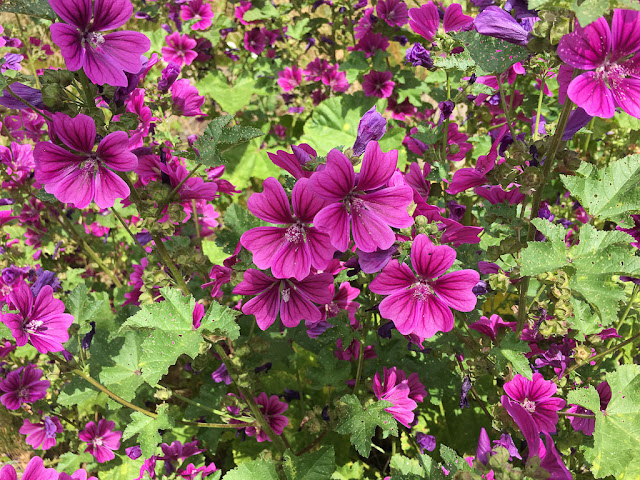 Some beautiful wild mallow thriving in the garden of a house a few streets from ours. This stuff also grows like a weed around here, but it's a nice weed. 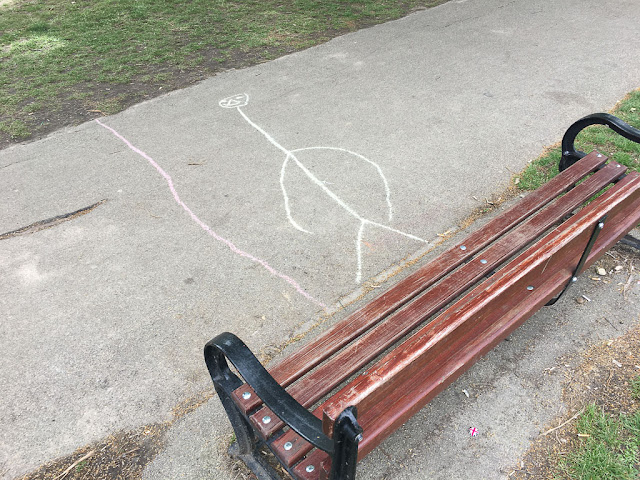 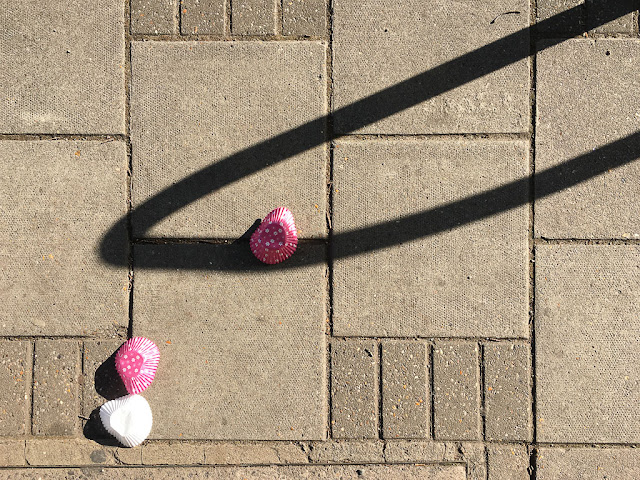 ....and a very long shadow, with cupcake cups, on Finchley Road. 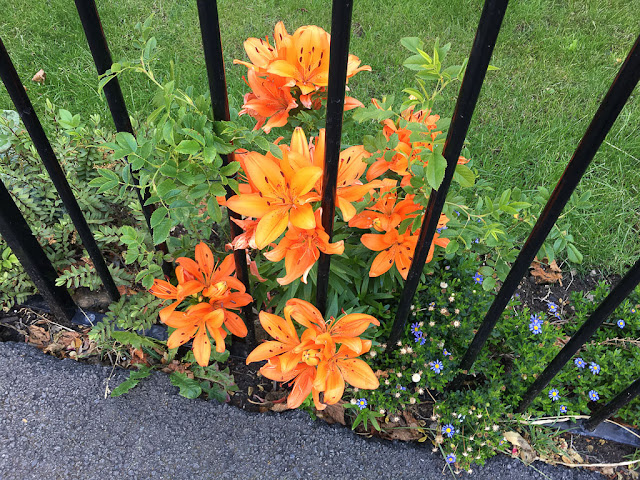 These belong to a neighbor. They're really nice lilies. I'd like to grow some of these myself, but we have trouble with lilies -- they often get eaten by slugs or snails or lily beetles. We have a few but they're not thriving like these. 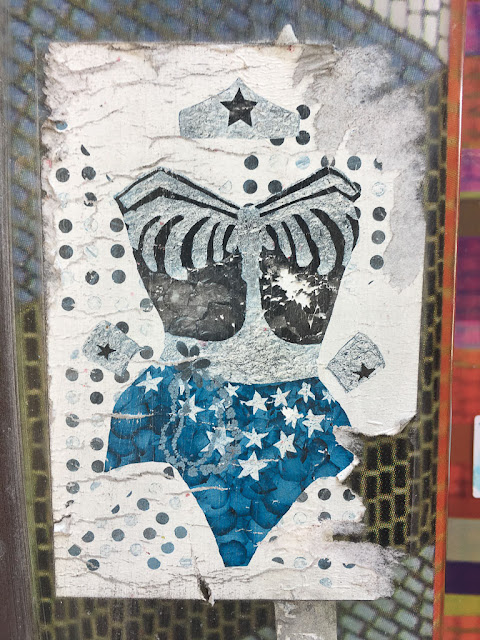 The clothes make the woman? 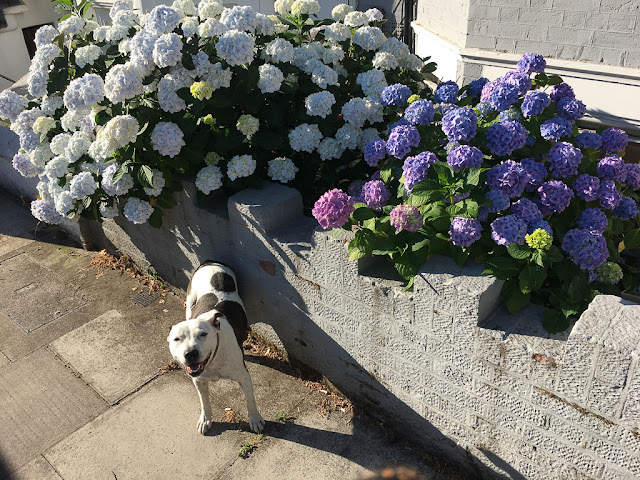 And finally, Olga, looking happy with some hydrangeas on one of our walks. (She's actually thinking, "Why are we stopping? Would you please put that annoying black rectangular thing away?!")
Posted by Steve Reed at 7:57 AM

Great photos as always! For a boring day, you sure produced a beautiful post!

Lovely mix of photos as always. I have noticed a lot of wild mallows round here too. Don't remember seeing them in previous years. Must be good weather for them!
Hope that Olga's ear is healing well.

I think Olga is really saying "I am going to beat the crap out of Rufus next time I see him! With his muzzle on the advantage will be mine!"

P.S. No need to tell me to take my litter home young man. I haven't dropped a single piece of litter in my entire life.

The day lilies and hollyhocks in the street would certainly cheer up my day.
Alphie

A very nice selection of iPhone photos! Love them, as always.
Some plants just do better with neglect and long odds. Something we should remember, I suppose.
The stick man suggests a story to me. I wish I knew it.

You have the best random photos. Never hesitate to share. I need that Day of the Dead tape for one arm of my office chair. The chair was expensive, is in perfect condition, except for one decimated arm pad. I have it wrapped with electrical tape right now. I'm going to find some cool tape like that and wrap both arms!

Those hollyhocks look great. You are right, they seem to thrive in some very odd places. Olga looks like that quote is exactly what she is thinking. Fun photos!

the flowers are all so beautiful. I wish I could grow hydrangeas. maybe I should try again. and I love the long shadow pic with the cupcake liners on the fancy pavement.

What a terrific group of photos.

When I was a kid I was totally fascinated by horsetails--so different from every other plant around. It was a semiarid environment (Butte, Montana) so they only grew in the rare damp areas next to streams, I think. No information about them then (no Google!) so I didn't know they were ancient.

I love seeing your random photos. It's always nice seeing what you've been seeing out on your walks.

I love your photos, especially the mallow plants. They really are beautiful. I have trouble growing lots of plants, but my lilies do well. You have a wonderful day, hugs, Edna B.

Those lilies are gorgeous! I love hollyhocks - I keep saying we need to plant some, but then we never do.

I like the mallow and the hydrangeas. Well I like all of your flowers. (That is "your photos" of flowers since not all the flowers are yours.)

The taped bike seat reminds me of a headless mannequin bust with a robe on. But then I see pictures in our wallpaper all the time :)

Great series of out-and-about photos, as always. And as Ms Moon said, some plants actually prefer poor soil. Maybe you could make one corner of your flower bed a fertilizer-free zone, maybe add some street dirt or something :)

The neighborhood where we used to live in West Seattle was in the process of being over run by horse tails. All it took was one neighbor who was too lazy to keep them in check and they bolted at went everywhere. They spread via underground runners. We were glad to leave there, the street was really starting to look bad.

My hollyhocks have great flowers but the leaves always get all ratty and dry up quickly. I wonder if those on the sidewalk get a good dose of dog pee as fertiliser?

Great photos..you have a very patient dog in Olga!
To think that much of the Coal Measures are made of huge tree size Horsetails...We must be thankful that they are relatively small!!

The mundane can be very interesting. I don't think we have horsetails here and perhaps if they grow so easily, it is just as well.

hollyhocks like neglect and bad soil I think...they grew abundantly in the dirt alleys in dirt town Wyoming-
they seem to like parking lots too.

David: Thanks! Sometimes it comes together and sometimes it doesn't. :)

Frances: I wonder -- maybe the wet winter and dry spring combo was good for them?

Alphie: A lot of our neighbors have really nice front gardens, which boosts the atmosphere on the block.

Ms Moon: I've read different things about hollyhocks and what they require, so who knows. But yeah, some plants DO enjoy being left more or less alone. (Like some people!)

Mitchell: I wonder if you could get it online? I bet so! If you fix your chair with it be sure to let us know!

Sharon: She really hates it when I stop and make her stand still for a picture.

Ellen: I bet they'd do OK in a shady spot. I wouldn't put them out in direct sun in the South.

SallyS: I remember reading about them in biology class in school, but I'd never seen one (I'm not sure they even grow in Florida) so it wasn't until I came to England that I began to appreciate them. (As long as they're not in my garden!)

Edna: Aren't those mallows amazing? We had some in our garden for a year or two but they haven't reappeared this year.

Bug: I hope you have more luck than me!

Catalyst: Yeah, I don't think ANY of them are ours -- in this post anyway!

Jenny-O: You have a vivid imagination! We actually have left part of our garden for wildflowers and wildlife. But we didn't plant the hollyhocks there. Maybe we should?

Sabine: Oh, that's a thought! Our hollyhocks get rust, which makes them look even worse.

Lilycedar: She is a very smiley dog.

GZ: Kind of like modern lizards. Much better small!

Andrew: I bet it's too dry in much of Australia. Just a hunch.

Linda Sue: We should try them in our front flower bed, which we don't tend much at all. They might do better there.

Love That Face - She Has Such Personality There - Excellent Capture - Speaking Of Which, Incredibly Timed Peacock Butterfly Photo Today - Like WoW!!! Hope You Three Are Enjoying The Weekend