Of Lilies and Koi 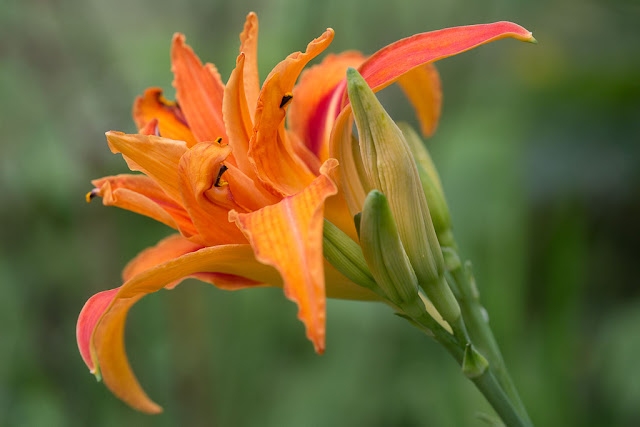 Our first day lily bloomed yesterday. Our poor day lilies face challenging circumstances -- they're sun-loving plants, but they grow in a part of the garden that has become heavily shaded by blackberry, climbing roses and a few other things. In the early spring they get plenty of sun but by midsummer, when they're supposed to bloom, they're practically buried in foliage. Last year, Dave transplanted some of them to a sunnier spot, and this bloom came from the transplants. The originals -- which were here when we moved in -- haven't bloomed yet. And I don't want to clear out the blackberries because I eat them!

Speaking of lilies, on June 23 I ordered a second canna lily, a variegated type with purple-and-yellow streaked leaves. It was on sale for £4.99 from a gardening website I'd never used. I waited, and waited, and finally, yesterday, it arrived: 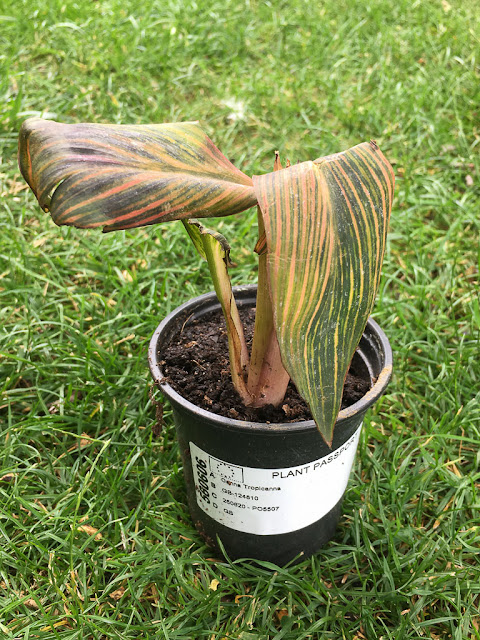 Now, isn't that just the saddest plant you've ever seen? Here it is from another angle, after I repotted it: Here's hoping it bounces back. I'm not impressed with the quality of the merchandise.

Some people mentioned in comments on yesterday's post that they've never been able to see the "koi pond" widget on my blog, in the sidebar on the right. Just to give you a sense of what it's supposed to look like, as well as to preserve it in my own memory -- in case it does stop working because of the abandonment of Flash technology -- I made a little video, complete with pseudo-Asian music courtesy of iMovie.


Of course this deprives you of the interactive element -- "feeding" the fish -- but you get the idea. I love how the koi hungrily follow the cursor! To give credit where credit is due, this widget was developed by a guy named Adam Bowman.

And this is one reason I love blogging -- I taught myself how to make a screencast video in Quicktime in order to make this recording. I learn so much indulging my stupid little blogging whims!

Dave and I have been watching a German show on Netflix called "Dark," half sci-fi time-travel and half murder mystery. Have any of you seen it? It's really good, but it has a cast of thousands and I have a terrible time keeping track of all the characters and their relationships. I need a flowchart! I'm also still watching "Snowpiercer," but Dave abandoned that one -- he decided he didn't like it, and I must admit the idea of a monstrous train running endlessly around a depopulated, frozen planet is a little bizarre. I mean, London trains stop running when we get a light dusting of snow, not to mention myriad other routine mechanical failures!
Posted by Steve Reed at 8:37 AM