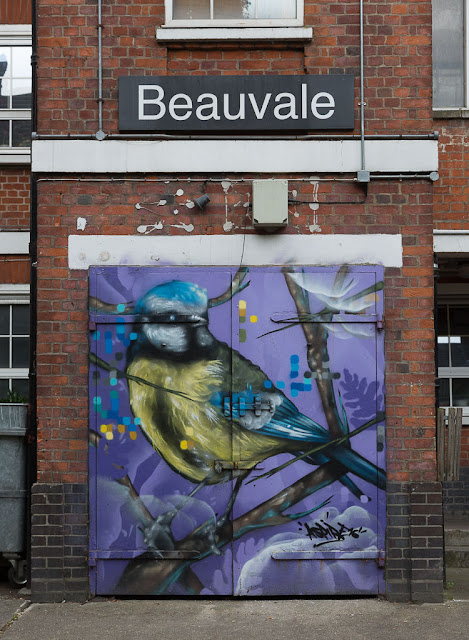 I've been hanging around the house and our immediate neighborhood for weeks, and although I am always happy to spend time beneath the susurrant* trees of our garden, occasionally I need to remind myself that I live in London. So yesterday I took a long walk down to Soho.

I tried to follow a slightly different route than the one I took in early May when I photographed the emptiness of our streets during the height of the lockdown. I passed through a housing estate in Camden that was full of amazing street art and murals, like this blue tit by the artist Aspire. 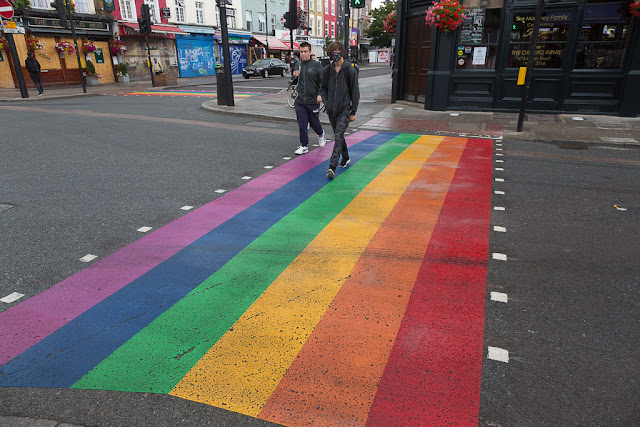 But I still wound up walking through Camden Town, where I found some crosswalks painted in rainbow colors. At first I thought it was for LGBTQ Pride, but then I realized it's probably part of the rainbow NHS tribute phenomenon. In any case, this is the closest I'll get to celebrating Pride this year. 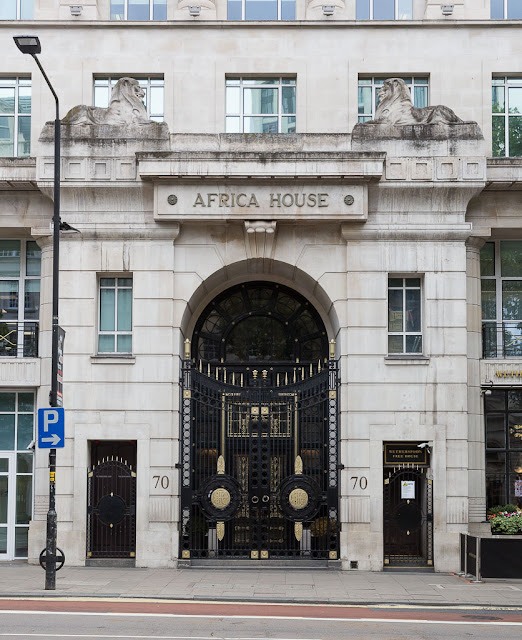 I made my way through Holborn and Covent Garden, past grand colonial-era edifices like the one above, Africa House, a historically listed building from 1920-22. 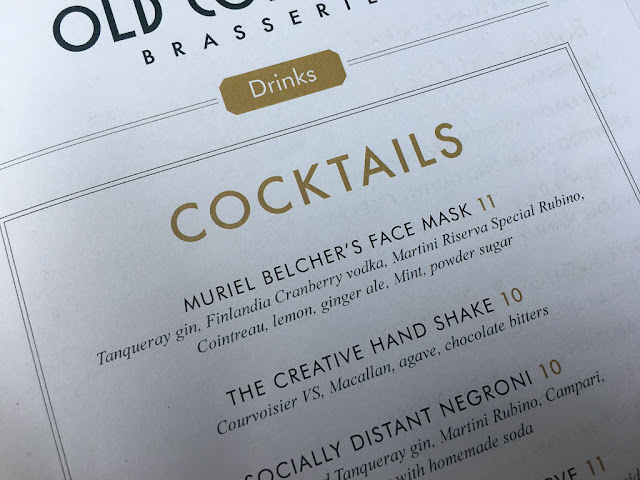 On Old Compton Street, I paused for lunch. The restaurant had an interesting coronavirus-inspired drink menu. Talk about making lemonade from lemons! I had to look up Muriel Belcher -- apparently she was a legendary Soho club owner and artistic muse in days of yore. In any case, I passed on her face mask and had coffee instead.

As I ate, I watched a couple have a loud argument in the street. "How much money did you give her?" a woman, wearing impossibly tight jeans, yelled at a man lazily brandishing a smoking doobie. "You're having sex with her, aren't you?!"

And then, as I was finishing my meal, I saw a colorful neighborhood character wander by: 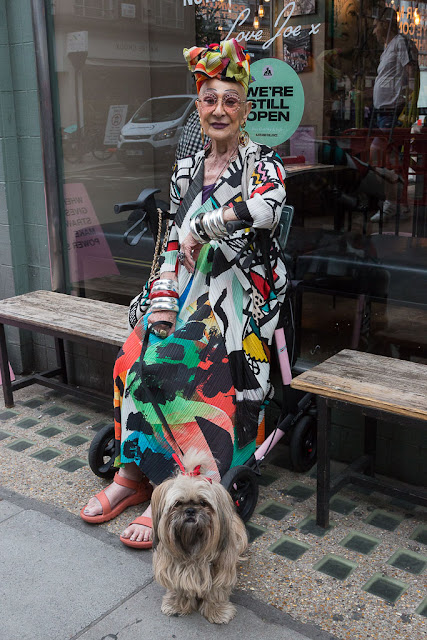 I'm sure you don't remember, but I've photographed this woman before. I caught up with her and asked her if I could take her picture, and she agreed, but not before pointedly telling me to step back and maintain my distance. (I was so intent on getting her picture, I probably was a little too close.)

Her name is Garbo, or so she said. And her dog is Sadie.

An aside, now: Dave and I were talking just the other day about how we can't find Crisco in grocery stores here. Dave wanted some to make a pie crust. Well, after photographing Garbo, I wandered over to Prowler, which is a gay-themed store selling books and fetish wear and gifts and other stuff. And what did they have on the shelf? Crisco! I will leave it to your imagination why that was the case, but at any rate, I bought a can. Now Dave can make a pie crust!

From there I headed toward home, happy to have finally gotten some exercise and reconnected with the city. 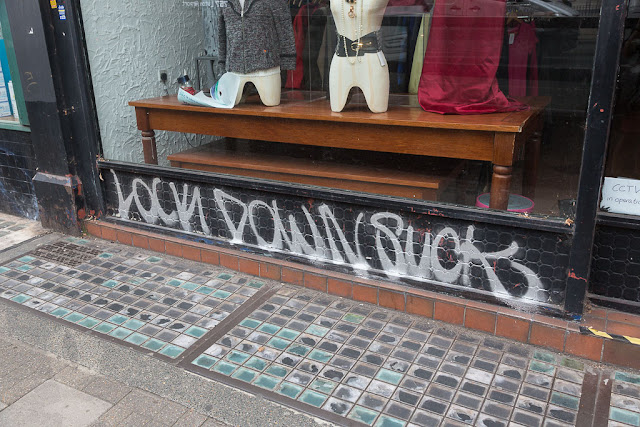 I had to look up " Crisco" ! Garbo looks amazing. Can she lift her arms with all those bracelets on?

The susurration of your sentences was satisfyingly soothing in this subjective submission Steve.

As always, thanks for letting me tag along on your walk. Garbo looks like quite the character. Baking pies is very popular in chic gay circles nowadays. What other reason would there be for them stocking Cristo? (By the way, that story made me laugh out loud.)

Was it the actual Crisco brand itself?
When I made "Starsky & Kirk debate cake" image-macros (Crisco is involved), English blogger Sarah (Circles of Rain) asked what Crisco was--in the UK, the more usual brand names are Trex, Flora White or Cookeen, I guess.
Does that sound right?

Fun to see photos of the city--thanks.
I'm grateful to people who add spice by wearing cool or wild things--a public service!

P.S. I imagine Garbo's flowing garb susurrates softly as she walks.
(I saw your pledge on the other blog---Gold star for using that in a sentence!)

I laughed so hard my coffee spilled...Love Garbo's attire!

OMG - the Crisco episode made me burst out laughing.

Let us know how the crust turns out. :)

That is hilarious about the Crisco. And now I want pie.

I love Garbo and Sadie! I remember her!
The Crisco story is hilarious! Food grade lube! Oh GAWD!
Too many exclamation points. Sorry.

What possible alternate uses could Crisco have?

I love that older lady. I should be so bold when I am her age.

I came across these old guys today and fell in love.

I love the lions and the gate on the Africa building. Garbo certainly is colorful. And from the looks of her, she enjoys life. How awesome. What a wonderful walk you had. May you enjoy today too. Hugs, Edna B.

I love that you got out and walked through the city again. The Holborn to Covent Garden route is the path I took most days when I was there four years ago. There are lots of interesting buildings on that route. Garbo is truly a colorful character. It makes me wonder if her life has been as colorful as her appearance bodes. Your Crisco story made me laugh out loud. I think we should see photos of the resulting pie!

love the blue tit mural and Garbo is delightful. the crisco in the gay themed store made me remember that back in the early 70s I had a couple of gay friends and one day one of them got an industrial size jar of mayonnaise in the mail or delivered (I don't remember exactly), sent anonymously. He was kind of flummoxed about it.

PS: Thanks for the info on the butterflies. You are great at finding things on Google.

I always love looking at your photos from your walks. I have been in London three times and I always enjoyed exploring the city. Ah...I had forgotten about Crisco. My mom uses it to make her pie crusts too!

What a great walk that was. Love the photos. A beautiful burst of color for our eyes.

A good walk and interesting and inspiring photos.
Crisco...just had a Google and the UK equivalent is Trex..at least not hydrogenated, but still rapeseed and palm oils...can I suggest that Dave tries Vegan Block by Naturli. I use it because I have vegans in the family, but it is good for pastry and flapjacks.
Your seeds arrived! On the mat when we returned from our break in the Highlands. Thankyou 🙂

You are truly blessed living in London. There is so much to see.

Talk about thinking outside of the box on your Crisco purchase! Such wonderful street art and how I envy your local neighborhood character. In my 'neighborhood', all characters are heavily bearded, tattooed, and support the idiot on the hill.

I was fascinated by the photo of "Africa House" and had to look it up. There apparently is a pub called "Weatherspoons" in it. I would have been tempted to stop. Garbo and her dog are phenomenal. And I do remember her from your earlier posts. And "Lock Down Suck": shouldn't here be a sussurating s somewhere in that sign?

I half expected Mr. Yorkshire Pudding to have a field day with the Crisco story, but he went with literary alliteration instead. I absolutely love Garbo and Sadie. What a great sense of style and demeanor. I wonder what her story is?

Africa House, as if Africa is one country. Garbo as in Greta I suppose. We once had a tin of Crisco. Making a pie crust you say. Too long ago to remember. Our next London visit, if we can ever travel again, must involve visiting Soho.

I think my dad used my mother's crisco in the garage a couple of times. Great lube. Garbo is the ultimate in fabuloso with her little dog that resembles Dexter. Another wonderful walk, I miss London so much. At this rate I may never see my favorite city again. Thanks for going on walks and sharing them, stay safe out there.

Frances: Yeah, Crisco is just not a thing here. Garbo gets around fine with all her jewelry, but she makes some noise!

YP: Now I thought sure you were going to make hay of my Crisco story. Was it too easy?

Mitchell: I couldn't believe it when I saw it on the shelf. I had no idea it was still used for THAT purpose! Seems so '70s.

Padre: I saw and photographed a lot of other cool street art too. Perhaps I'll post some of it in coming days.

Fresca: YES! It was real Crisco! I don't know for sure if the other brands you mentioned are exactly the same.

Mary: I will keep you posted!

Bug: It's never a bad time for pie!

Ms Moon: She is very memorable, for sure. And yeah, as I told Mitchell, I had no idea anyone bought Crisco for that purpose anymore.

Lilycedar: OMG! Those guys are hilarious! Thanks for that clip. I've never played that game.

Edna: The lions were what caught my eye, too!

Sharon: Yeah, I would love to know Garbo's backstory. I'm sure there is one. You're welcome on the butterflies! It took me a while!

Ellen: Mayonnaise? Now THAT I've never heard of. Sounds like either someone had some misconceptions about him or it was a mistake!

Michael: London is a good walking town, although I still think New York is the best.

GZ: Wow, that was fast! I can't believe they're there already!

Susan: Well, we have our share of unsavory characters too, but I stay away from them. LOL

Catalyst: Weatherspoons is actually a chain of pubs -- a big company that owns many pubs all over the country. I didn't see a pub in Africa House but maybe I was too distracted by that grand entrance!

37P: Me too! He let me down! (Although his alliteration was quite impressive.)

Andrew: It's definitely one of London's most entertaining neighborhoods. I wondered if Garbo was telling me that was her name because she "vanted to be alone."