The Tin Tabernacle, and Reopening 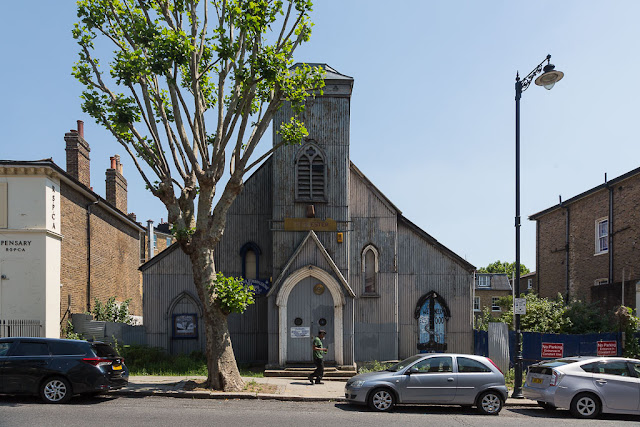 This peculiar building, which I often pass on the bus in Kilburn, is made of corrugated sheets of metal and used to be a church. It's known as the "Tin Tabernacle" and dates back to 1863. In the 1920s it ceased being a place of worship, and was eventually taken over by the local chapter of the Sea Cadets, a sort of scouting organization. The interior was transformed to fit a nautical theme.

When Victorian England was booming, corrugated metal churches were apparently a thing. They could be erected quickly to serve a growing population, and the technology was relatively new. Apparently this is one of the last in London, but there are plenty of others around England.

As long as I've lived here, there's been a sign in the window saying they need £250,000. I think this dates back to a fund-raising campaign in 2010 meant to restore the building and update its electrical works. I have no idea whether than ever happened, but the Sea Cadets say on their web site that they now meet at St. Augustine's, a nearby church -- if that's any indication.

Yesterday was the big reopening day for our pubs and restaurants in the UK, and I went out on the high street around noon to see what was going on. The pub I consider our local, the Black Lion, still doesn't appear to be open. But many other places were, and people were sitting inside and out. I obviously didn't measure the space between them, but they seemed fairly close together.

I went into one restaurant where I've bought take-away fish in the past, and there were about 20 people inside. I was the only person wearing a mask. None of the servers and obviously none of the customers (who presumably were eating) were masked, and no one seemed at all concerned about maintaining any distance from me. So, on the plus side, they seem to be doing a good business, but on the minus side, I felt anxious and eager to get out of there.

Then I went to the grocery store, and again, I was one of just a few people who were masked. Masks have never caught on in this country, and they seem even less ubiquitous now.

We'll see how this goes! I hope our infection rates don't spike in the next few weeks.

I have a couple more Olga pics to share with you. The first is by Francisco, the dog walker, on one of their outings together... 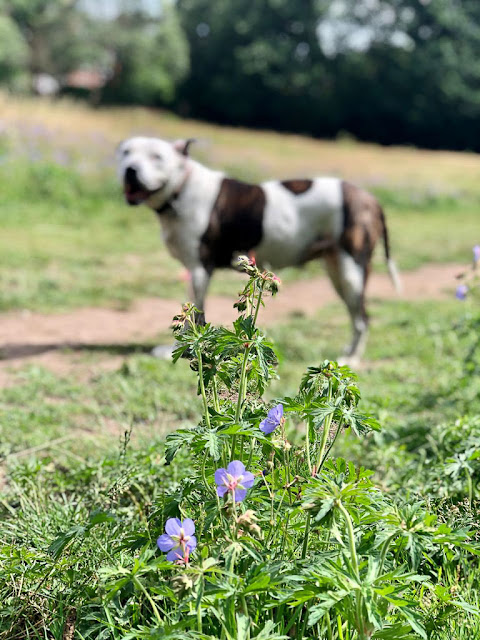 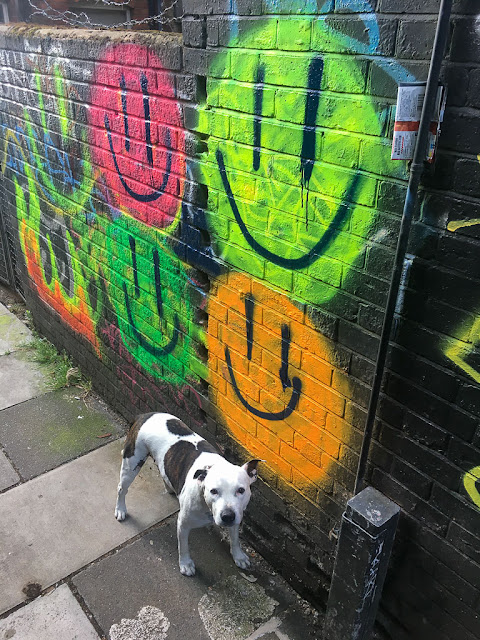 ...and then there's this one, which I took a few days ago on our walk along Billy Fury Way. Olga, who so often seems to be smiling and is even standing beneath smiley faces, appears more wary than anything.

We didn't do anything special for July 4. I heard a couple of pops and cracks last night, as some of my fellow Yanks apparently set off fireworks here and there. But with that awful man in the White House I am not particularly feeling any national pride. If we throw him out in November, then I'll celebrate!
Posted by Steve Reed at 7:08 AM