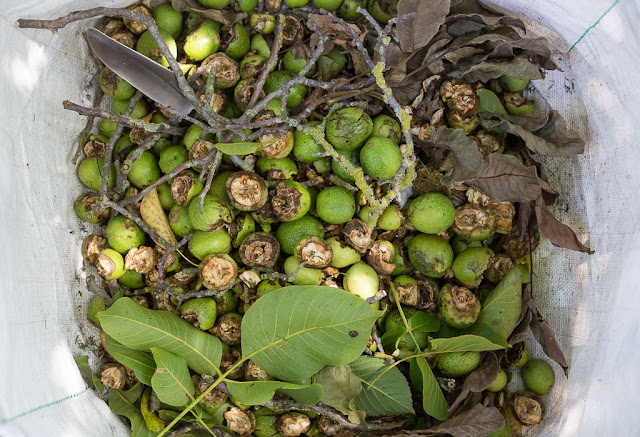 Once again, my mornings are consumed by picking up fallen detritus from our walnut tree. I wrote about this last year, with virtually the same photo, so I guess I don't need to repeat myself. Suffice to say it's a challenge to keep the lawn clean and comfortable for walking. (And I am not a neat freak when it comes to lawns, believe me. My standards are pretty low!) 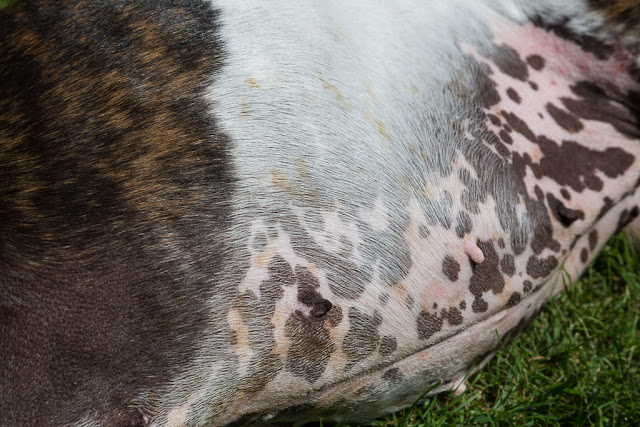 What I didn't mention last year is the way the walnuts stain Olga's belly when she lies on them. She's got a whole new layer of light brown spots. She looks sort of unwashed, but even baths don't remove walnut juice. 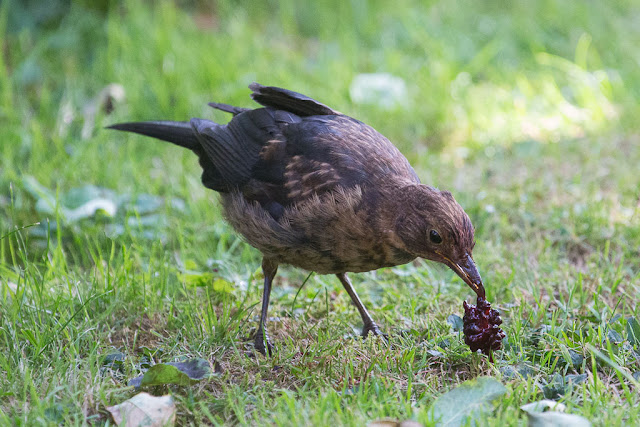 Remember how I recently mentioned seeing a blackbird eating our blackberries? Well, yesterday this bird landed and snarfed down a berry right in front of me. But I belatedly realized it's not a blackberry -- it's a mulberry, from Mrs. Kravitz's tree next door. The bird, despite its coloring, is -- I believe -- a blackbird, in the process of losing its juvenile brown plumage and turning darker.

There are lots of young birds out and about now. We had a noisy clutch of baby dunnocks in the forsythia bush by our bedroom door, and they seem to have vacated the nest just within the last day or two. We've seen some out in the garden that seem very young and oblivious, and I suspect they're from that nest. There were also some sparrows nesting under the eaves of the house, and they're on their own now, too.

Not that leaving the nest is easy. Yesterday I watched another adolescent blackbird tailing its parent, loudly complaining for food, but the mother -- who was carrying a berry like the one above -- refused to hand it over. She was trying to force her teenager to fend for itself, I suppose. Tough love! 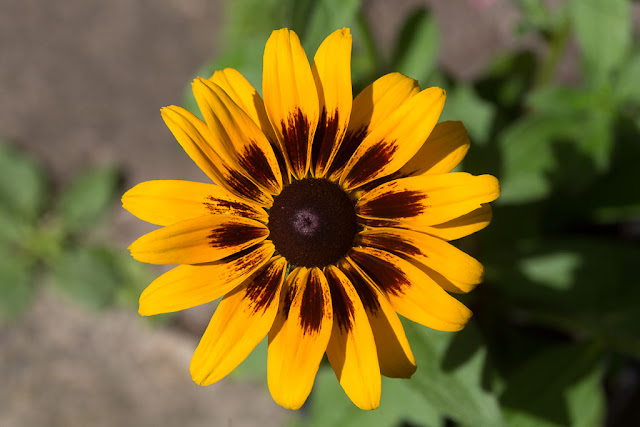 I ran some errands yesterday afternoon, including buying more suet balls for the bird feeder. The starlings are nuts for suet balls. They consume them by the pound, and then take noisy, energetic baths in the bird bath. And then Olga drinks the water, which we call "bird juice." It's all very entertaining.

While at Homebase I also picked up this Rudbeckia (above). We bought one last year and it didn't survive the winter. Perhaps we'll be luckier this time around!

Dave and I finally finished the German TV show "Dark," on Netflix, last night. It's a very complicated show involving time travel and travel between parallel worlds, a huge number of characters (all with older and younger versions of themselves), and then duplicate identical characters in the parallel worlds. It's all about the structure of time and reality. As I said to someone, it's like a soap opera written by Einstein and produced by Nietzsche. I kept telling Dave -- when I wasn't asking "Who is he again?" or "Is she the same character as that girl in the previous episode?" -- it seemed very German. It was really good, but I found I had to let go of many of the details and let the story carry me along. It came together at the end, more or less.
Posted by Steve Reed at 6:50 AM