Curse of the Walnuts 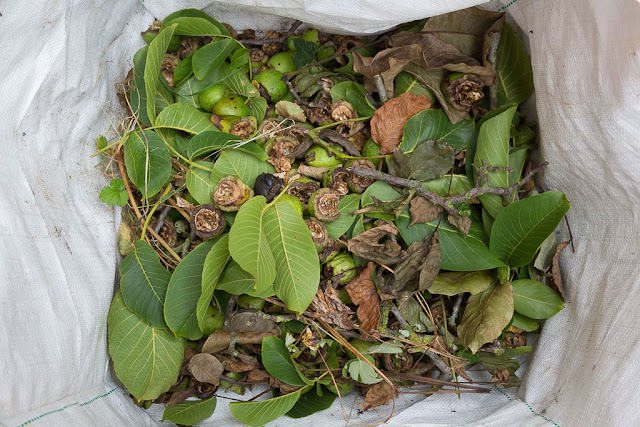 As I have no doubt mentioned before, we have a good-sized walnut tree in our garden. It's a beautiful tree and I would never wish it any ill will, but there's a downside -- it's the messiest tree I've ever seen. I'm not someone who insists on a super-neat lawn, but it's too messy even for me.

The culprits are (again) the squirrels, who root around among the branches and gnaw apart the walnuts. The husks rain down on the lawn like golf balls. I try to get out every few days and pick up the larger pieces, because walking over golf balls is never comfortable -- never mind mowing over them.

Above, in our lawn recycling bag, is all the stuff I picked up yesterday. In their enthusiasm to get to the nuts, the squirrels frequently tear apart the tree itself, so I find leaves and small twigs scattered about too. Mrs. Kravitz, next door, hates this tree. You may remember that she had all the branches removed that extended over her property, and she has suggested to me more than once that we cut it down -- which I would never do in a million years, messy or not.

One of the guys who came to trim our shrubs several years ago told us we could eat these walnuts, but I can't even begin to figure out how to pick, husk and prepare walnuts for eating. So the squirrels can have them. I'll just continue to be their busboy.

Speaking of Mrs. Kravitz, she's also been complaining about the condition of our garden fence for years. It's true that it's an older wood-panel fence, and it's bowed in a few places, and there are some minor gaps and wobbles. Although this fence runs between her property and ours, it's apparently our responsibility because each homeowner in this area is responsible for the fence on the left side of their garden.

She insists that it needs to be replaced, but when she complains to me, I just say, "That's up to the landlord." Because honestly I don't care a whit -- as far as I'm concerned it works fine, keeping us out of her garden and (more importantly) vice versa. Well, she took her argument to our management company, so on Tuesday they sent a guy out to look at it. He seems to think the landlord could get away with replacing parts of the front half -- the back portion is fine, he said.

Mrs. Kravitz is not going to like that. Oh boy. There will be fireworks!

I've been reading Chrissie Hynde's autobiography, one of the books I picked up at the Staffy Rescue thrift shop up in Scotland about a month ago. It's interesting enough, although it sounds like she was a hell-raiser in school. She was actually on the scene during the Kent State shootings in 1970!

Here's what's funny -- remember how I was listening to the '60s music station while driving around Florida, and I complained about both Richard Harris's song "MacArthur Park" and Iron Butterfly's "In-A-Gadda-Da-Vita"? Well, Hynde mentions Harris's song as one that still brings a lump to her throat -- and my friend Colin told me that when he was a college radio DJ he always began his show with "In-A-Gadda-Da-Vita," because it's a long song and it gave him a chance to browse the record stacks and find other things to play during his shift.

To each his or her own, I suppose.

In Dave's absence I've been watching stuff on TV that he doesn't like. For example, I'm working my way through "Bloodline," which he gave up on a while back, and with any luck at all I'll have it finished by the time he returns to England.

A few nights ago I watched a 1964 movie called "For Those Who Think Young," with James Darren, Nancy Sinatra, and Bob Denver and Tina Louise before their "Gilligan" days. I became curious about it after seeing Darren in something else, so I found it on YouTube. It's a terrible movie -- like, irredeemably bad. The lead actress is Pamela Tiffin, who I am convinced was actually an android. If you're curious like me, you could watch 10 minutes to get the sense of it, but whatever you do, don't invest in the whole thing.
Posted by Steve Reed at 6:37 AM