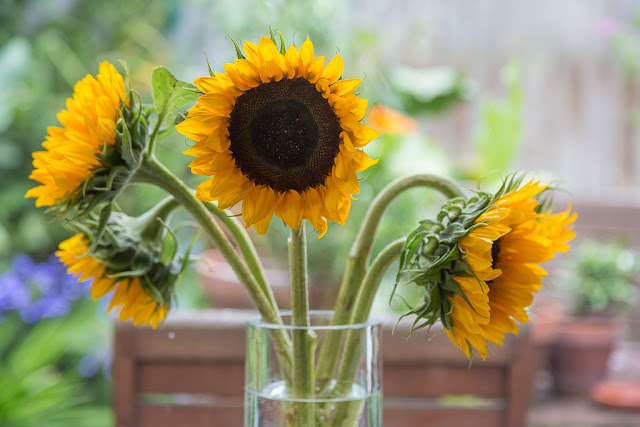 Yesterday morning I was out in the garden when I realized I was hearing a lengthy muslim prayer. It was sung, sort of like the calls to prayer I used to hear regularly when I lived in Morocco, but this was much longer and kept returning to "Allah akbar, Allah akbar." It sounded like it was coming over a loudspeaker somewhere in the neighborhood, which mystified me, because as far as I know we don't have a mosque anywhere nearby. The closest one I know of is in Kilburn.

I got out and walked around to see if I could pinpoint the source, but I couldn't. Our flat is on a hill in West Hampstead and the wind was blowing pretty well yesterday morning, so the maybe the sound was simply being carried farther than it seemed. Mysterious!*

I took Olga to the Heath around 10:30, and a few blocks from home we found a bouquet of sunflowers stuffed into a public trash can. They were still in their wrapper and looked pretty fresh to me, so I retrieved them -- and not wanting to carry them around the Heath, I took them back home and put them in water before resuming our walk. Olga was very patient with these shenanigans.

As usual, Olga rolled in the high Heath grass and it finally occurred to me to make a video.

Despite -- or maybe because of -- her energetic rolling, she seemed tired out by our walk. We didn't even circumnavigate the entire Heath, as we would have even a few months ago, and she still trudged behind me on the way home as if she could barely take another step. She slept all afternoon, snoring on her bed. Poor late-middle-aged dog. 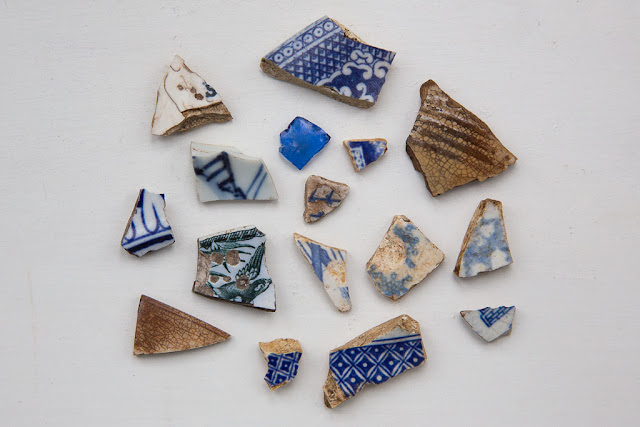 Yesterday's haul of found pottery chips. I especially like the bird at lower left and the basket pattern at the bottom. 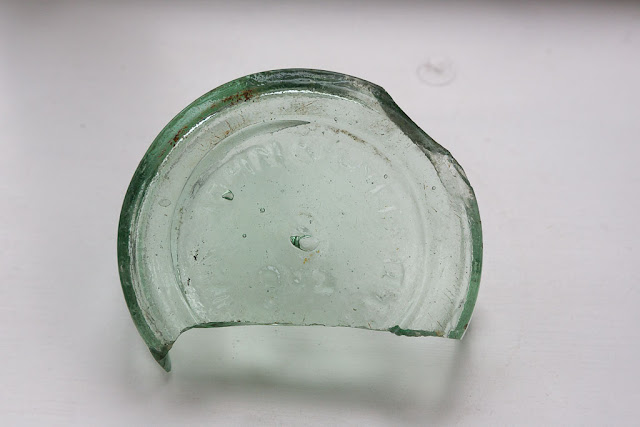 I also found the remains of a large jar. You can't quite read it in the photo, but it says "John Kilner, 902, Wakefield." Apparently this was a Kilner Jar, which (similar to the Mason Jar) was used in home canning. I'm not sure what the 902 refers to -- some kind of production number, maybe? The Kilner factory was in Wakefield, in Yorkshire. It's a cool piece of glass, green and ripply with lots of interesting air bubbles, probably from the 1800s. 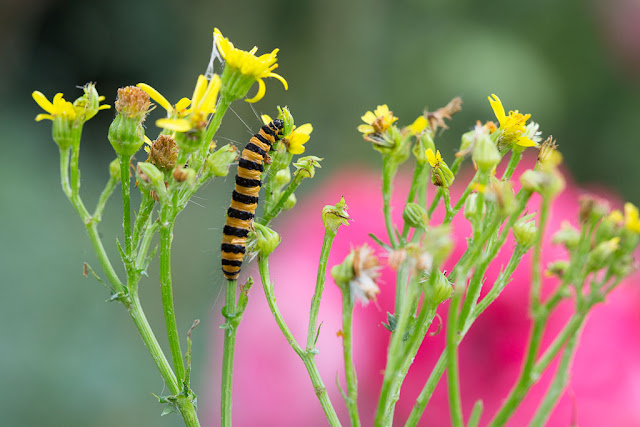 Finally, I'm sure you're sick to death of hearing about our garden caterpillars, but I thought this was a cool shot. They're definitely dwindling in number. I think they may be preparing to pupate, falling to the ground and wrapping themselves in a hard shell underground for the winter before emerging as moths next spring. I hope that's what's happening, anyway, and they're not just dropping dead or being eaten. But who knows.

Dave comes home today! In fact, he just texted me that his flight has landed at Heathrow. Yay!

*I have belatedly realized that yesterday was the beginning of the Muslim Eid al-Adha holiday. Hence the prayers. Still curious about where they were coming from, though.
Posted by Steve Reed at 6:39 AM