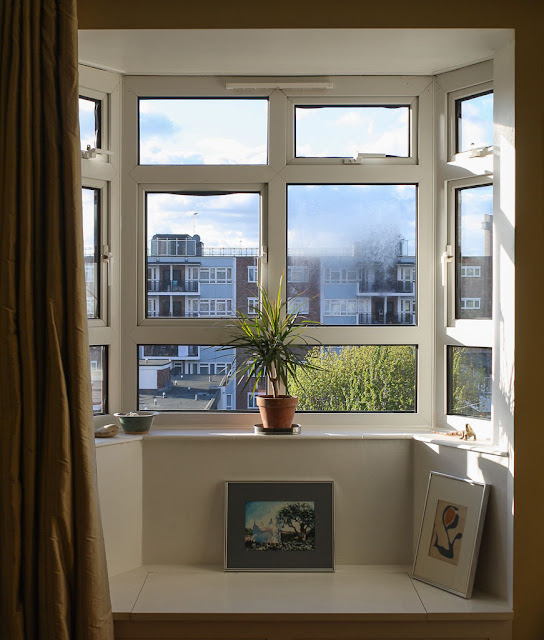 Those of you who have been longtime readers will remember that Dave and I used to live in Notting Hill, in West London. This was the view from our bedroom window. I'm showing you this not because of that lovely (?) building across the street, but because of the plant on the windowsill. It's a dracaena that we bought at the Portobello Road market. This picture was taken on April 29, 2012 -- so, seven-plus years ago. 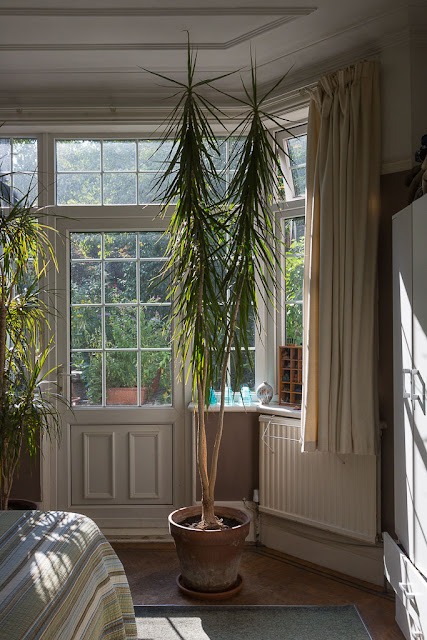 It still lives in our bedroom, albeit a different bedroom, and as you can see, it has become a tree. Our ceilings are almost ten feet high, and it's finally bumping up against them. (We have the same problem with our avocado tree in the living room.)

Obviously some pruning is in order, but I'm not sure yet how to do that. I'm thinking I'll cut one stalk at a time -- the tree should then branch out at that point, and once there's some greenery there I can cut another stalk. That way the tree will always have some leaves. But if I get impatient I may just cut it all at once. It's a pretty durable plant.

No doubt you've been reading that Boris Johnson intends to suspend Parliament beginning next month. His proposal has caused a lot of drama, with some people accusing him of subverting democracy. I am no expert in British politics, but from what I can tell, it's not quite as bad as it sounds -- Parliament doesn't normally sit for part of September anyway, for something called "party conferences," and he's extending that time period by about 11 working days. On the other hand, 11 days can make a difference in terms of government action before Brexit, which is scheduled for Oct. 31.

Johnson insists he isn't trying to stifle debate before Brexit, but clearly that's what he's doing. I think he just wants to get it done, with a minimum of further dithering. Problem is, his plan for getting it done -- to the extent that there is one -- could ultimately be fairly harmful. The verdict depends on who you ask, of course.

I think in the interest of public debate it's a mistake for Johnson to make this move, but I'm also not sure it's ultimately going to make much difference. Either way it looks like I'll be getting Brexit for a birthday present. (My birthday is Nov. 2.) If it were up to me I'd send it back, but you just have to make the best of some ghastly gifts, right?
Posted by Steve Reed at 6:35 AM