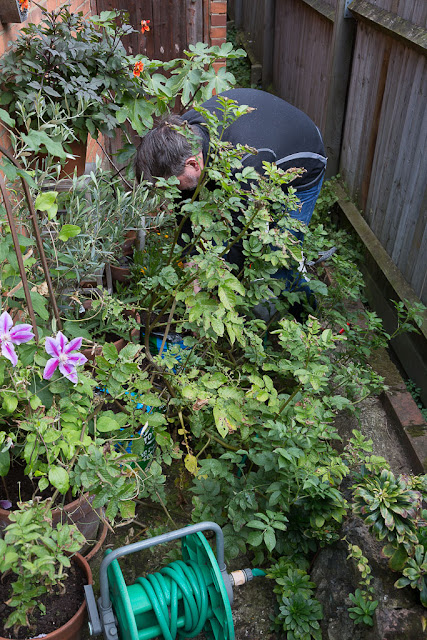 Back in April, we became accidental potato farmers when a co-worker gave us three seed potatoes for our garden. We don't generally grow vegetables, and I wasn't very enthusiastic about the project, but I didn't want to waste the seed potatoes and I wanted to be able to report back to the co-worker. So I planted each potato in its own bag of compost, and put the bags on the patio at the side of the house, the sunniest location in the garden.

The plants grew and grew, and rapidly became HUGE.

Well, Tuesday was harvest time! And I am so happy, because those potato plants were blocking our access to the gardening shed and also blocking light from some of the other nearby plants. They were like the man-eater Audrey II in "Little Shop of Horrors." It was time for them to go.

In the photo above, you probably can't easily distinguish the potato plants from some of the other vegetation -- but basically everything in the center of the frame is potato.

Dave started the harvesting process by cutting away all the bushy growth... 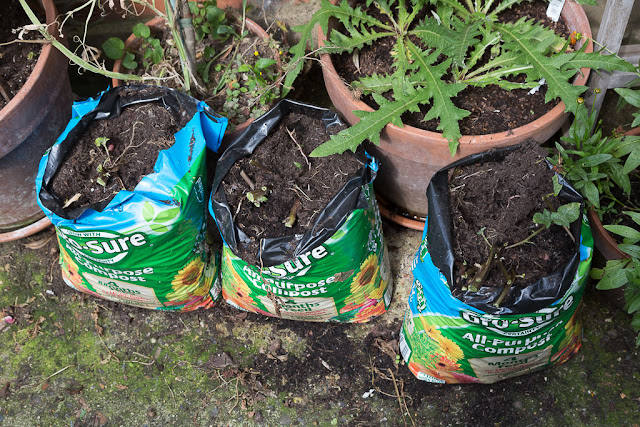 ...which left us with just the bags holding the root balls. (You can see the squirrels have been in the bags, stealing potatoes near the surface.) 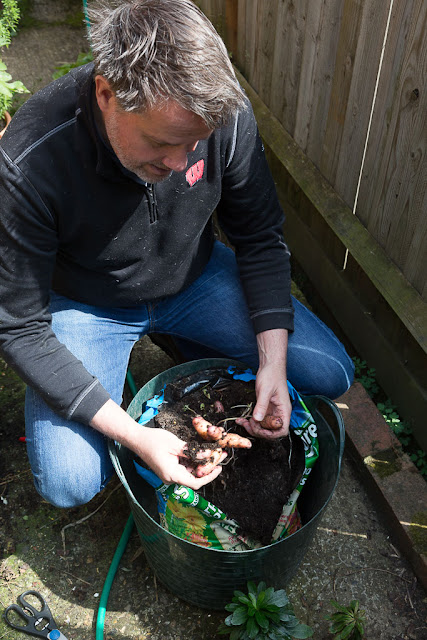 Dave sliced open the bags, rummaged through the roots and voila! Potatoes! 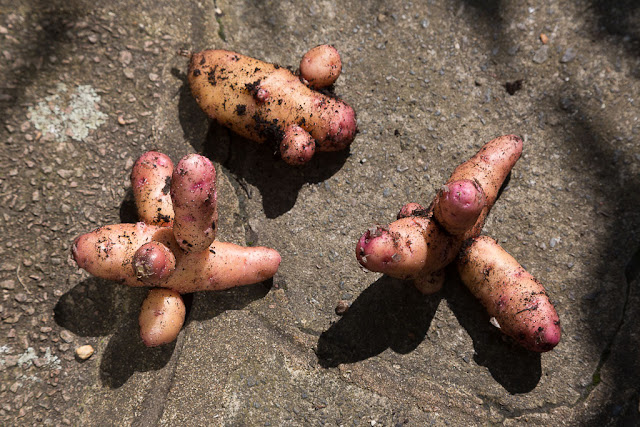 Some of them were very odd-looking, like jacks or the Sputnik satellite. 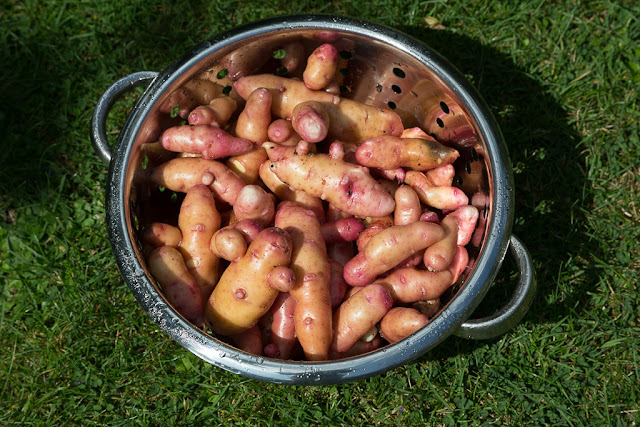 But overall, we got a pretty good haul! And more, it turns out, than the co-worker who gave us the initial seed potatoes -- his plants got neglected by the neighbor who was supposed to water them while he spent three weeks in the states. He wound up with about a third as many potatoes as we did.

Dave cooked some of them up Tuesday night. They don't have a really strong taste but the texture is firm and they're pretty good -- all the more so because they spent their lives in the organic sunshine right at the side of our house.

As it turns out, it was a good thing I took these photos Tuesday, because it poured down rain yesterday. I stayed inside most of the day, finishing "Swing" by Kwame Alexander, a young-adult book that's our school-wide community read this year. It was OK. A bit long, from my adult perspective, but a teenager might like it more.

I went to school in the morning on a few errands -- even though I'll be back at work today -- and last night I went with some friends to the Sadler's Wells theater to see Matthew Bourne's new ballet production of "Romeo and Juliet." I really liked it -- it's a drastic re-imagining of the original, using Prokofiev's score. It's set in a mental hospital, and there are no warring families, but the actions parallel Shakespeare's story pretty well so it's not so reimagined that it's alien. The setting means all the dancers wear white, featureless clothing reminiscent of hospital gowns or pajamas, and of course the dancing was amazing. A fascinating show!
Posted by Steve Reed at 6:32 AM