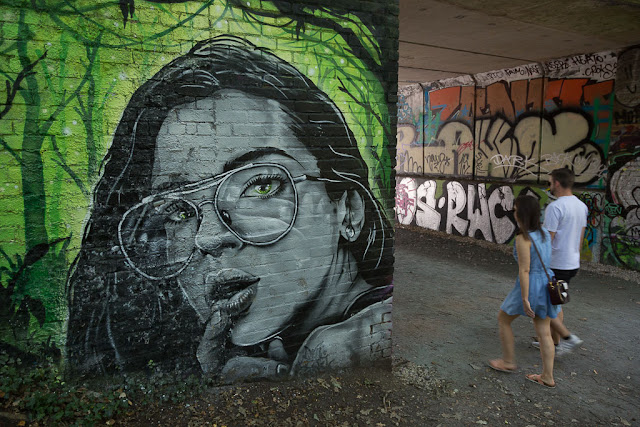 Yesterday was another amazing day, weather-wise, so I seized the opportunity to walk two segments of the Capital Ring -- from Highgate eastward through Stoke Newington to Hackney Wick. Nine miles or so, all told. 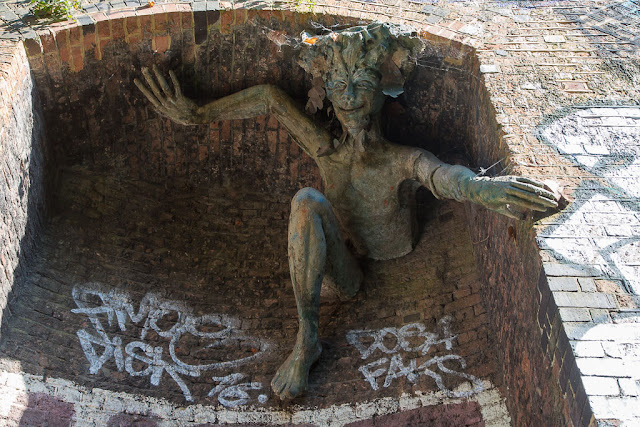 This creature was emerging from one of the arches -- a "spriggan," or kind of goblin, according to my trusty map. "Spriggans were grotesquely ugly, found at old ruins, guarding buried treasure and generally acting as fairy bodyguards. They were also said to be busy thieves. Though usually small, they had the ability to swell to enormous size -- they're sometimes speculated to be the ghosts of old giants. They were said to steal human children and leave baby spriggans in their place."

Leaving that nightmare behind... 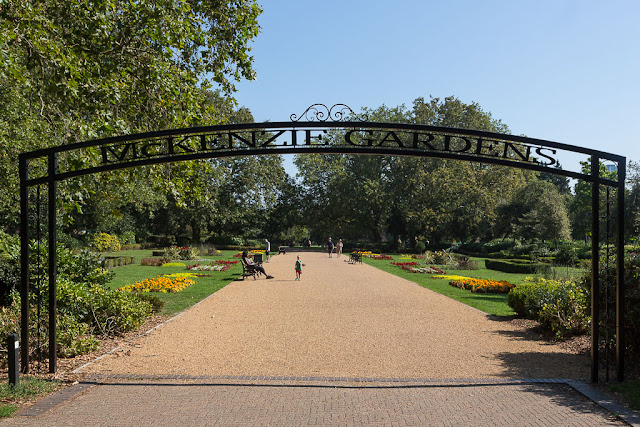 ...I passed into Finsbury Park, where I stopped at a cafe for coffee so hot that I couldn't begin to drink it for a good five or ten minutes. (A pet peeve of mine.) Some women at an adjacent table were having a conversation about global warming and how worrying it's all become, given our occasionally high temperatures this year.

I passed through the formally planted McKenzie Gardens, and then out of the park and onto a towpath along what's known as the New River -- even though, as my map pointed out, it's neither new nor a river. It's a canal that once supplied London with fresh water from Hertfordshire. 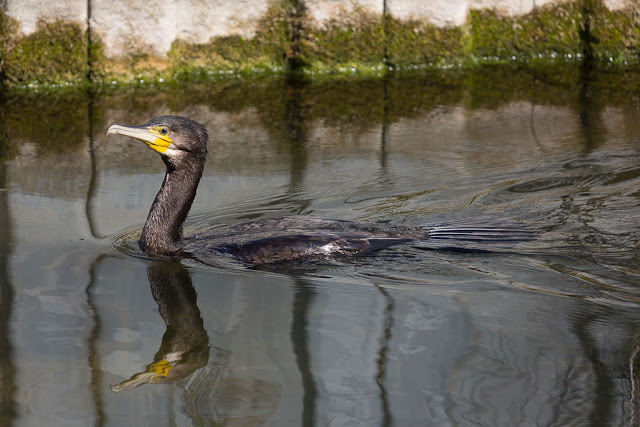 I passed through a couple of wildlife preserves around old reservoirs, and I saw cormorants and other waterbirds. There were lots of attractive new apartment developments nearby. I eventually passed through Clissold Park, a beautiful grassy expanse with small ponds and a big house from the 1790s. 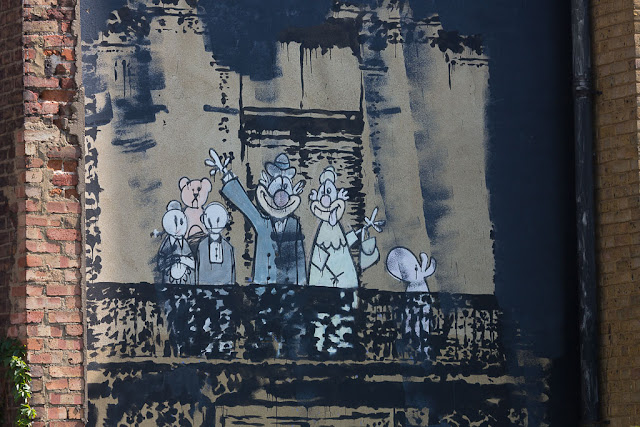 From there I finally reached Stoke Newington, where I saw one of Banksy's famous artworks high up on a wall -- a cartoon of the royal family waving from a balcony. (It used to be much bigger, but the local council painted over parts of it while removing graffiti ten years ago.) 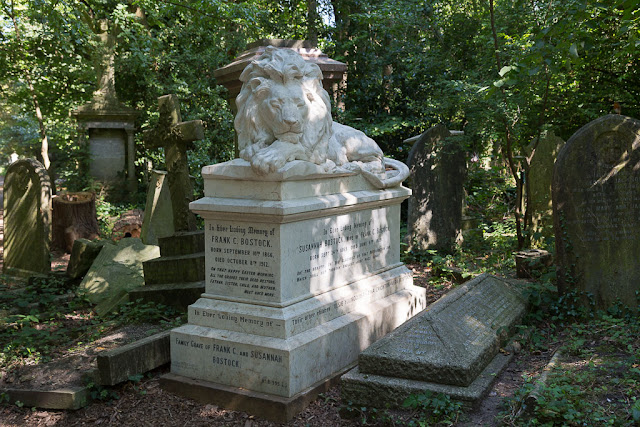 I passed into Abney Park Cemetery, which contains more than 300,000 closely laid graves (!), according to my map. It's now a wildlife preserve where some rare species of insects and other wildlife have been found.

One five-mile section of the walk ended at this point, but I was feeling ambitious and it was only lunchtime, so I kept going. I walked toward Springfield Park, where I stopped at a cafe and had a baked potato with beans and cheese and a side salad, with '80s retro music playing in the background ("Never Gonna Give You Up" and "Holding Out for a Hero," for example). It's funny how I always hear classic rock or retro rock/pop when I'm out and about. I'm fine with it, because I like retro, but you'd think there's no modern pop music. 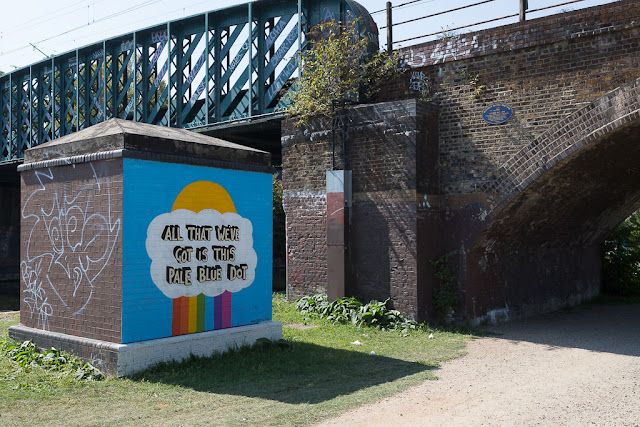 The path led to the River Lea and followed the riverside for several miles. There was lots of wildlife and more interesting street art. 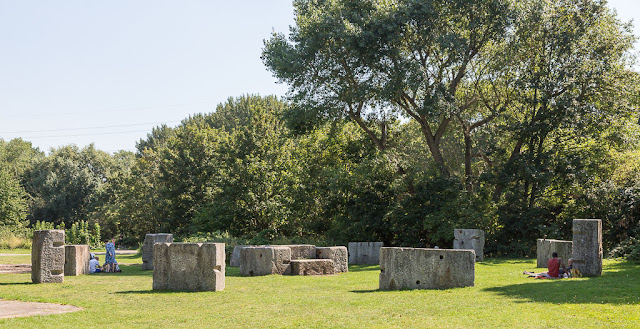 Eventually I wound up at a place called the Middlesex Filter Beds, a wildlife preserve that used to be a huge sand-and-gravel filtration system for London's water supply. My map promised two artworks at this location -- and I found one, "Nature's Throne," touted as Hackney's own miniature Stonehenge. (It's made of granite blocks that formed the foundations of an old building.)

The other was "Rise and Shine Magic Fish," the heads and tails of giant ceramic fish emerging from a pond. I was intrigued by the description and I really wanted to see it, so I wandered all over the place -- I bet I spent at least 45 minutes looking for those stupid fish. The map said they were there, but didn't say where, and the park's occasional signposts didn't mention them. Finally, hot and annoyed, I gave up, and only belatedly read that they were moved several years ago to another location after one of them was stolen! 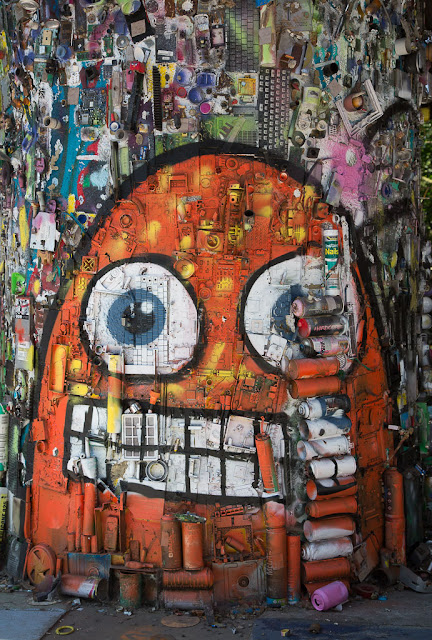 I continued walking the sunny path along the river -- and by this time, mid-afternoon, it was fairly hot (90º F or so) and I was thinking I'd bitten off more than I could chew. But finally I reached Hackney Wick, which is known as a mecca for street artists. I passed under an overpass where the concrete support columns had been plastered with all sorts of items, from CDs and old computer parts to spray cans and toys. Some playful graffiti had then been sprayed overtop the materials. 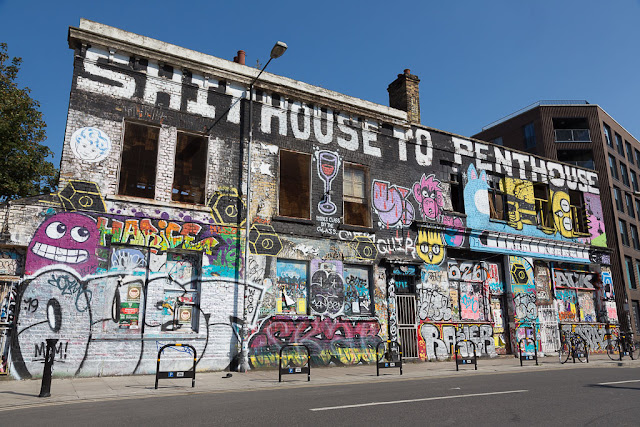 Gentrification is a contentious issue in Hackney Wick, as this old closed pub colorfully points out. There's been a lot of new construction, like that apartment building to the right, and some people don't like it. (I've photographed this old pub, the Lord Napier, a couple of times before over the years. It's always changing, as street art often does.)

Finally, I made my way to the overground train station and headed home. Of course part of the train line was out, which required me to zigzag through the tube system to get back to West Hampstead -- but that's another story!
Posted by Steve Reed at 6:52 AM