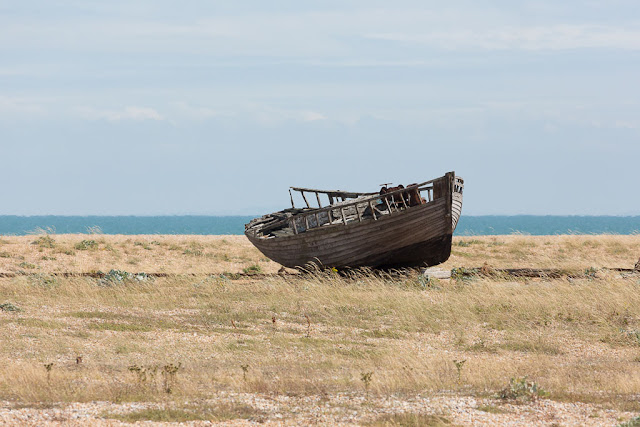 You may remember that last fall I read filmmaker Derek Jarman's book "Modern Nature," about his life and garden in the remote village of Dungeness, on England's southern coast. Ever since then, I've had it in my head to go to Dungeness. It was the last of the day trips I've been meaning to take and I'm running out of summer, so yesterday became the day.

I took a train to Ashford and then another train to Rye, followed by a coastal bus that let me off very close to Dungeness. From there I could easily walk down the road that leads past Jarman's cabin to the lighthouses on the point.

It's a weird place. There is no obvious soil, really -- the ground is almost entirely made of pebbles, stretching all the way out into the water. This is known as "shingle," and according to the RSPB, which has a nature reserve there, "Dungeness has one of the largest areas of vegetated shingle in Europe and is internationally important." It isn't easy to walk across shingle, by the way -- it gives way beneath your feet and is constantly shifting. I'm amazed there's any vegetation at all.

Now I understand why Jarman's attempt to grow and write about a garden there was truly audacious. 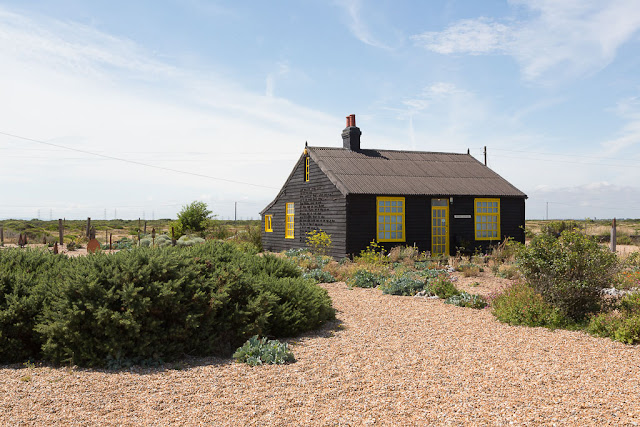 The cabin, known as Prospect Cottage, looks much like it did in Jarman's day, and his descriptions in "Modern Nature" still ring true:

"Prospect faces the rising sun across a road sparkling silver with sea mist. One small clump of dark green broom breaks through the flat ochre shingle. Beyond, at the sea's edge, are silhouetted a jumble of huts and fishing boats, and a brick kutch, long abandoned, which has sunk like a pillbox at a crazy angle; in it, many years ago, the fishermen's nets were boiled in amber preservative.

There are no walls or fences. My garden's boundaries are the horizon. In this desolate landscape the silence is broken only by the wind, and the gulls squabbling around the fishermen bringing in the afternoon catch. There is more sunlight here than anywhere in Britain; this and the constant wind turn the shingle into a stony desert where only the toughest grasses take a hold -- paving the way for sage-green sea kale, blue bugloss, red poppy, yellow sedum." 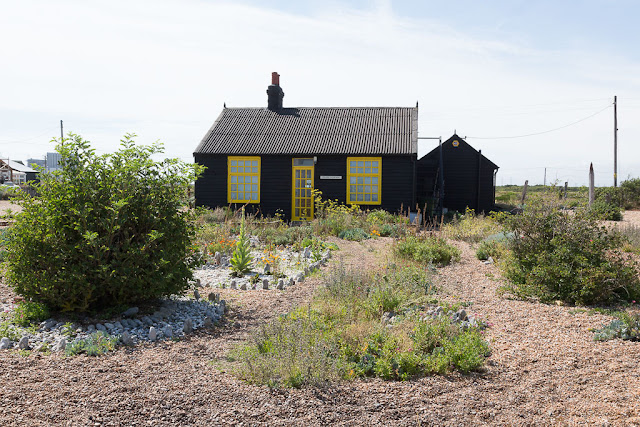 "On either side of the front door are two neat flower beds each twelve feet long, and two feet six inches wide...at low tide I collect large oblong flints which are uncovered by a good storm and plant them upright like dragon's teeth in the beds. In front of them, two small circles of twelve stones each form a primitive sundial. In spite of the dry summers these flower beds thrive. A little mulching helps."


Jarman wrote those words in January 1989, when weather conditions were no doubt different than they were yesterday. The following August he described a landscape more similar to what I saw, dry and golden with yellow blooming ragwort and blue bugloss:

"The sea has turned perfect blue, set off by the pale yellow grasses and pink shingle. For painters of colour this grass is the elusive Naples yellow, a color which I have always loved." 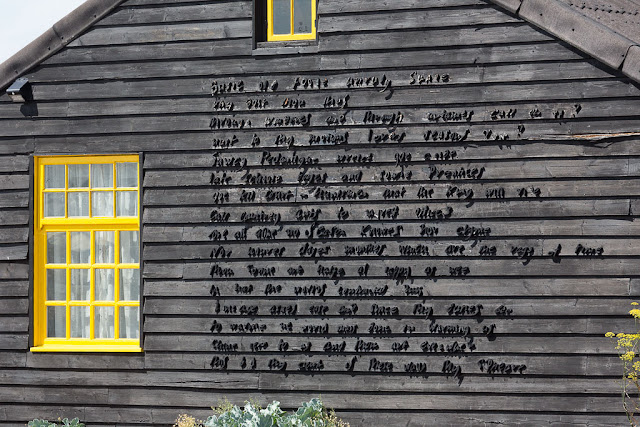 One the side of Prospect Cottage are words from John Donne:

Busie olde foole, unruly Sunne;
Why dost thou thus,
Through windowes, and through curtaines call on us?
Must to they motions lovers seasons run?
Sawcy pedantique wretch, goe chide
Late schoole boyes, and sowre prentices,
Goe tell Court-huntsmen, that the King will ride,
Call countrey ands to harvest offices;
Love, all alike, no season knows, nor clyme,
Nor houres, dayes, months, which are the rags of time.

In that the world's contracted thus;
Thine ages askes ease, and since thy duties bee
To warme the world, that's done in warming us.
Shine here to us, and thou art every where;
This bed thy center is, these walls, thy spheare. 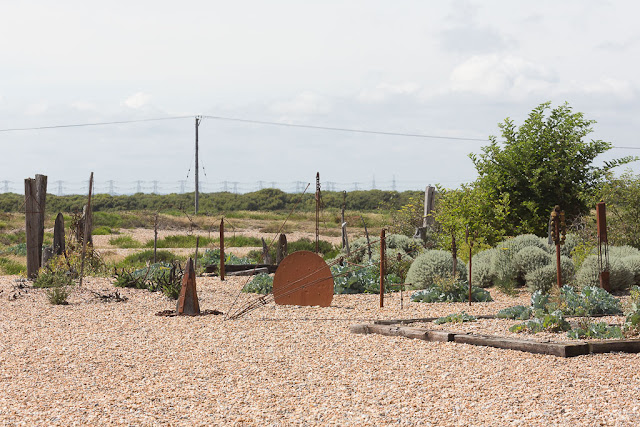 As in Jarman's day, the garden is studded with bits of found metal and wood and other ornaments.

Prospect Cottage is privately owned, so I shot all my pictures from the street. A few people who came by at the same time as I were much more brazen, wandering right up to the garden. I suppose the lack of fences or barriers is a testament to the current owner's admirable desire to preserve Jarman's environment. (Jarman died in 1994.) 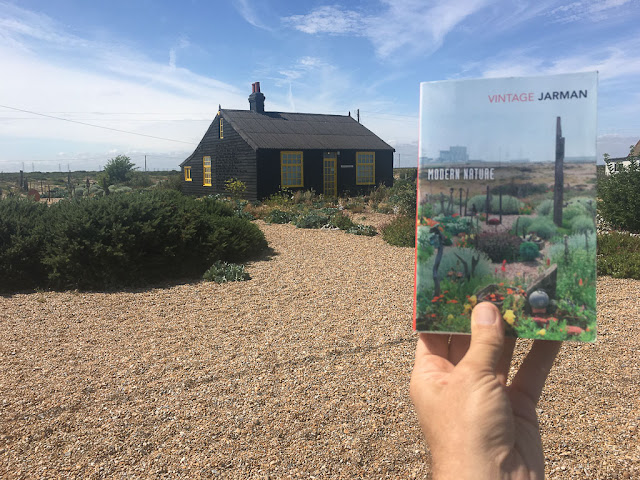 It's a weirdly circular thing, isn't it, to bring a copy of a book to the location where it was written? 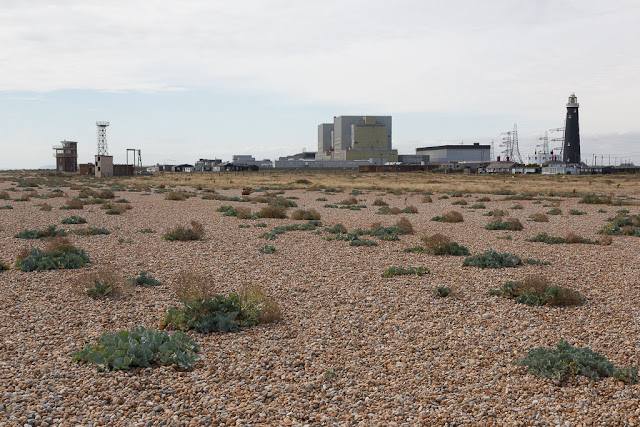 Although it's mostly nature preserve, Dungeness is hardly a pristine environment. There's a huge power station there, blocky and gray on the horizon. (Those clumps of gray-green vegetation in the foreground are the sea kale that Jarman mentioned. We have sea kale in our garden but it doesn't look quite the same -- maybe it's a different species.)

And there are two lighthouses, the old one (at right in the photo above)... 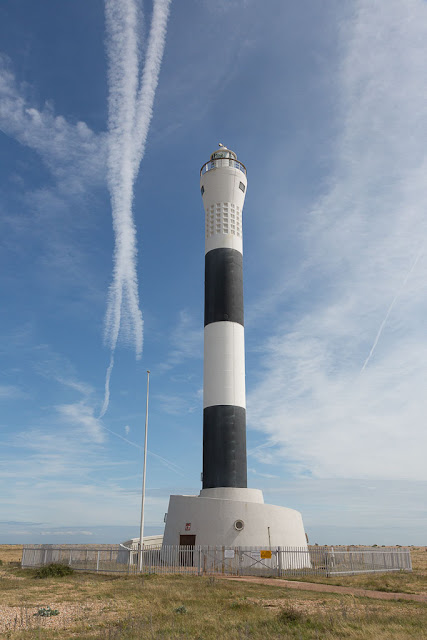 ...and a newer, more modern version. 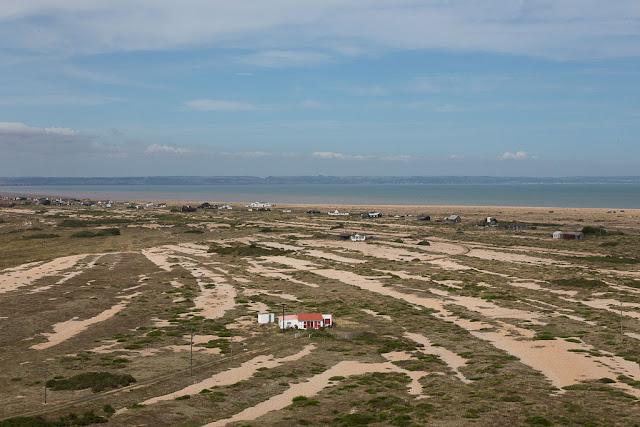 Visitors can climb to the top of the old lighthouse, which gives a good view of the sparse terrain, with the row of cottages (including Prospect Cottage) along the coastal road.

Anyway, I'm so glad I got motivated to go down there, and I was happy to find that re-reading parts of Jarman's book on the train gave me just as much pleasure as reading it the first time.
Posted by Steve Reed at 7:09 AM