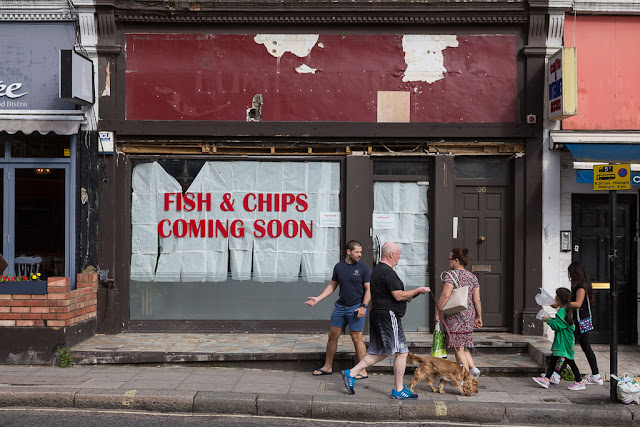 This place has been promising for months that fish & chips will be "coming soon." I'm not sure what their definition of "soon" is. I blogged this shop back in January and it looked exactly the same -- maybe tidier. In fact I wondered if the project had been abandoned entirely, but those little signs by the door say "staff wanted," so they appear to be hiring.

Olga seems under the weather. Last night she acted so strangely when she came back from her outing with the dog-walker -- mopey, wandering and listless. Eventually she went in to the bathroom and curled up on the rug. She never goes in there! I think she wanted a small, dark place with a cool floor. I went in and sat with her for a while, and she eventually fell asleep, and then I moved her to the bed and she slept all night. I won't really know how she's doing today until I walk her, but she still seems a little mopey. I wonder if she ate sticks while out with the dog-walker. She loves chewing up a good stick, but if she swallows the bits they tie her in knots.

Today is the last day Dave and I have to both get ourselves to school by 8 a.m. It's always such a trial during opening week, because we're on the same timetable and competing for the same bathroom space, and I often wind up not getting a shower or eating breakfast because I just don't have time. (It's going to be even more complicated if Olga starts sleeping in there regularly!) Next week I move to my regular shift, 9:15 to 5:15, so I'll have slightly more leisurely mornings.

It looks like I'm going to be back in Florida in a couple of weeks, to help my mom relocate to another unit in her retirement community. Right now she's in an independent living unit, but she needs a place that offers more supervision. My brother is making the arrangements and although he's told my mom, we're not sure it's really sunken in. So that will be interesting. I think it's important for my mom to see that we're both involved in this change and that we think it will benefit her -- hopefully that will help her adjust. My boss and co-workers have been great about agreeing to give me the time off.

Oh, and it's a good thing I took that picture of our last caterpillar that I posted yesterday -- because now it's gone. We're officially caterpillar-less, as far as I can tell. I'll let you know if any moths emerge!
Posted by Steve Reed at 6:38 AM