Walnut Husks and The Sneezer 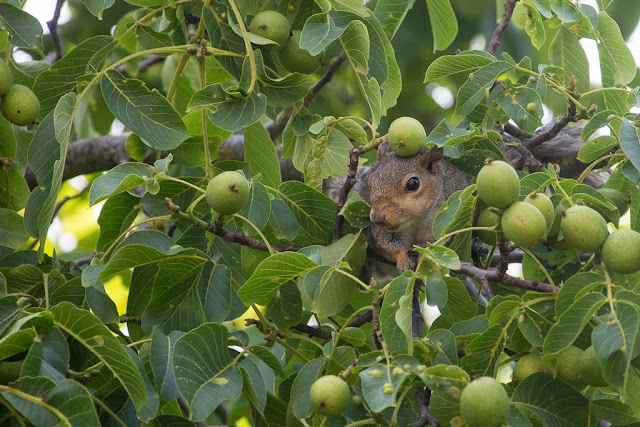 The squirrels are going through their annual obsession with the walnut tree in our back garden. They scamper around in this tree all day, gnawing open the walnuts and dropping the green husks to the ground, and they would drive me crazy if I were one of those people who insist on a neat lawn. I do go out and pick up the larger pieces of shrapnel now and then, but for the most part, I ignore the situation.

Our heat wave continued yesterday. At 3 p.m. the temperature was 90º F. There were additional warnings about air pollution being carried up from France by southerly winds -- in which case it must have been la pollution, according to Google Translate. I didn't notice things being any more polluted than usual, and I even walked to Homebase in the morning along Finchley Road, which -- busy as it is -- has got to be an epicenter for air pollution in North London. 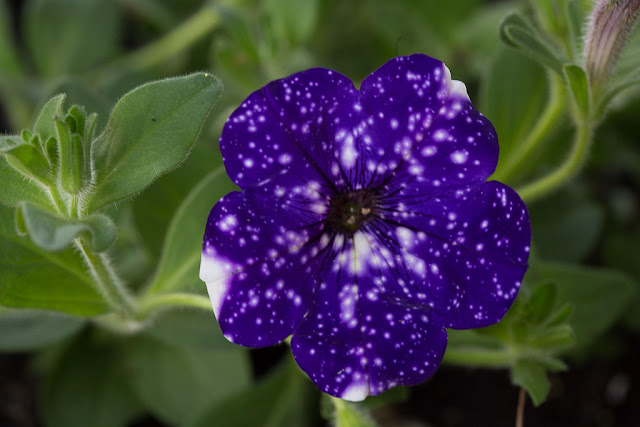 I went to buy compost, because we had lots of plants that needed repotting. While I was there I picked up these amazing petunias -- they're called "Night Sky." Aren't they great?

Let me tell you -- walking home with a box of petunias and a 50-liter bag of compost, along with a few other odds and ends, was definitely a challenge.

I spent some time in the garden in the afternoon, despite the heat. Almost everything is now in its new pot, including an overwatered aloe that I found in someone's trash a few days ago. It may or may not survive.

This is such a funny time of year because everyone's windows are open and we all learn a lot more about each other. There's a guy who lives in one of the apartments behind us who has the most explosive sneeze I've ever heard. Naturally, we call him "The Sneezer." He's like the neighborhood foghorn or factory whistle -- the background sound we all subconsciously know and acknowledge.

Today it's supposed to be cooler, thank God. And it's also Dave's birthday!
Posted by Steve Reed at 7:12 AM

Steve - as you don't have a car you could bring heavy/awkward stuff home in an Uber...or you could invest in a cool shopping trolley. See this one for example:-
https://www.amazon.co.uk/Shopping-Trolleys/b?ie=UTF8&node=2722827031

Of course around here, we don't open our windows until it cools down. I feel bad for all of you Londoners who don't have AC and yet have this horrible heat. I'm having a very hard time with the heat this year.
Those petunias are amazing!! Great find!
Happy birthday to Dave! I hope it's a great one!

I guess without a car you have to lug things home. I don't like the heat but what do you do?

Happy birthday to Dave!! Love that petunia. I'm going to have to look for that up here on the California north coast. What a beauty.

I love that petunia, very pretty. I think there is a loud sneezer living next door to me. I very rarely hear noises from the neighboring apartments but late at night when things are more quiet, I can hear a few sneezes coming from that direction. Just the sneezes, nothing else.\
Please tell Dave that I said Happy Birthday!

How wonderful to have your own walnut tree, even if the squirrels eat up most of it. My husband noted yesterday that someone's been feasting on our peaches, which right now are about the size of a walnut and just as hard. It doesn't matter, because if by some miracle the peaches make it to maturity, they always disappear overnight thanks to the squirrels/deer/birds.

Birthday wishes to Dave! Great pictures; I love the squirrel with its head right under an apple. That petunia is just beautiful. I haven't bought my hanging baskets yet; I wonder if our nursery has any of those lovelies!

Happy birthday to Dave! I love that petunia - so cool! I'm a pretty loud sneezer my own self - I wonder if our apartment neighbors ever said, there she goes again. Ha!

I hope that you and Dave enjoy a cooler birthday. The petunia is really beautiful. I wonder if it is available in the U.S.

Your photos are getting better and better!
Please enter the flower show photo comp this year!
The classes are
PETS
AND
SEASIDE,

Happy birthday to Dave. :-) It was insane yesterday. Even for a Cuban! :-)

Not only do we share a rose in our respective gardens, we also have the same petunia! A stunner. Gardening in this heat is tough, do you need to water a lot?

that is a gorgeous petunia and I'm not a big fan of petunias. I tend to like the small simple ones that bloom profusely over the over-hybridized big showy ones. and I'm impressed that you carried all that stuff home. I need to repot some things but I need to acquire some bigger pots.