Cats at the Window 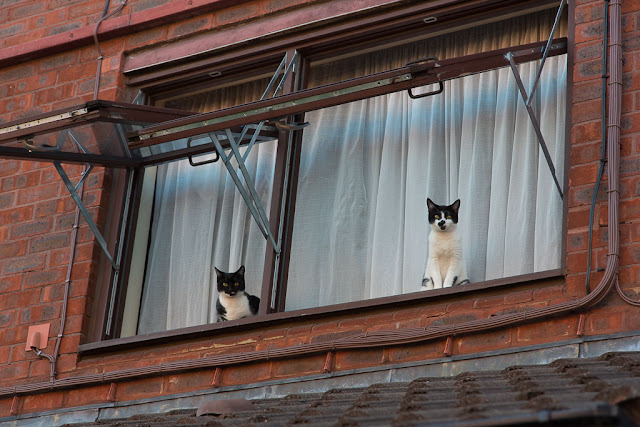 Well, this is it -- our last day of school for two months. Woo hoo!

You'll be glad to know that nearly all our library materials were returned -- including a book checked out by a parent last September. I have to chase down one or two items today from some teachers (including a video camera checked out last September), but other than that, we're in pretty good shape.

Yesterday we had our big end-of-the-year school assembly, where departing faculty and staff members are recognized. So many people are leaving that this meeting took three hours. It was a special kind of hell, especially in our overwarm school auditorium. I understand that we have to give everyone their due, especially people who have been at the school for decades, and individually the presentations were amusing and entertaining. There were songs, there were jokes, there was a slideshow, there was poetry. But collectively it was a slog, and I don't think I'm dishonoring anyone by saying that and I don't think any of my colleagues would disagree.

Olga and I often see the cats above on our morning walks. They slink around outside until they see us coming, when they leap to their windowsill in alarm. They must be related -- don't you think?

The latest news on the Grenfell Tower fire indicates that composite cladding of the type that may have been used on the building is illegal in the United States on tall structures. I'm glad someone foresaw the danger of that material, but it's still a mystery why authorities here decided to use it. I agree with one of our elected representatives in Parliament, who called this event "a monstrous crime" and "corporate manslaughter."
Posted by Steve Reed at 6:13 AM