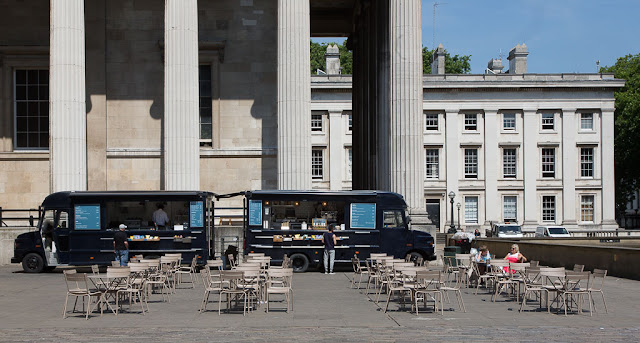 Right at the outset I must tell you that there's a rather shocking picture below. If you are a person of Victorian sensibilities you may not want to proceed further.

I went to the British Museum yesterday. Does the forecourt (above) look blazing hot? That's because it was! I'm impressed anyone was sitting out at the cafe, but around lunchtime it was actually quite busy. This photo was taken a few hours later, when things had slowed down.

I went to the museum partly to be in a cooler environment than our house, and partly to see a show of LGBTQ artifacts -- or more accurately, artifacts of interest to the LGBTQ community. They included political buttons from the '70s and '80s, an engraved print of a transsexual French nobleman from the 1700's, and antique coins and pottery shards depicting same-sex relationships.

And then there was this, from the Roman empire: 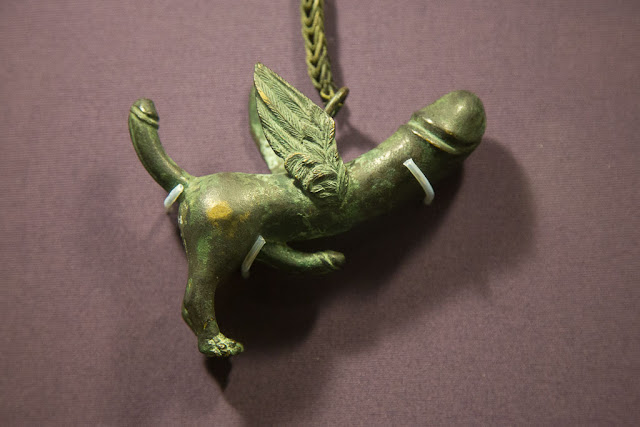 Some of these items were once considered so scandalous that they were housed within a separate "Secret Museum" section of the British Museum, no doubt away from the delicate eyes of women and children.

Anyway, it was an interesting exhibit, but incredibly tiny -- a shoebox-sized room that, ironically, was woefully under-air-conditioned. (Or perhaps not air-conditioned at all.) I enjoyed the museum gift shop more, where I found some non-scandalous birthday gifts for my nieces, which is a huge relief.

Speaking of LGBTQ, have you heard about Drag Queen Story Hour? I think this is possibly the best idea I've ever heard -- bringing drag queens in to read to small children. Kids love costumes and glitter and imagination, after all, and drag queens (at least the ones I've met) love to perform. Everybody wins!
Posted by Steve Reed at 6:18 AM