Camo Dog and a Lost Hat 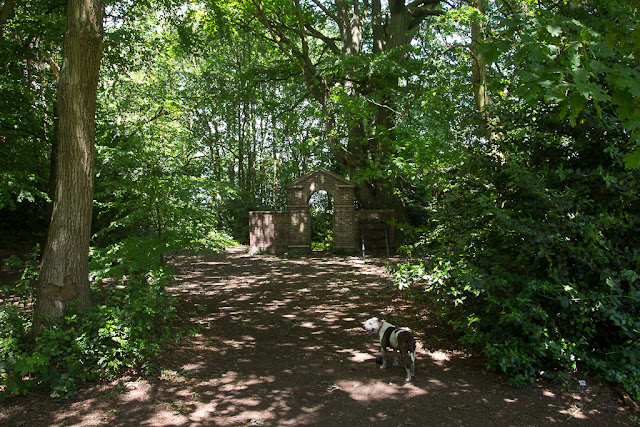 I know this looks like about a million other photos I've posted of Olga on Hampstead Heath. But check out how well she blends into that sun-dappled forest floor! Now I understand why dogs evolved with spots, and preserved them through all their hybridizing. Camouflage!

We had a long, thorough walk yesterday, which we enjoyed, even though we're both apparently showing our age. I could barely keep my eyes open after I got home, and I had to take an aspirin for back pain from walking so long with my camera bag. And Olga, well, she went practically unconscious for the duration of the day.

It somehow never occurred to me, while walking the dog on the Heath these past few years, that a day might come when we can no longer do it comfortably. Gather ye rosebuds! 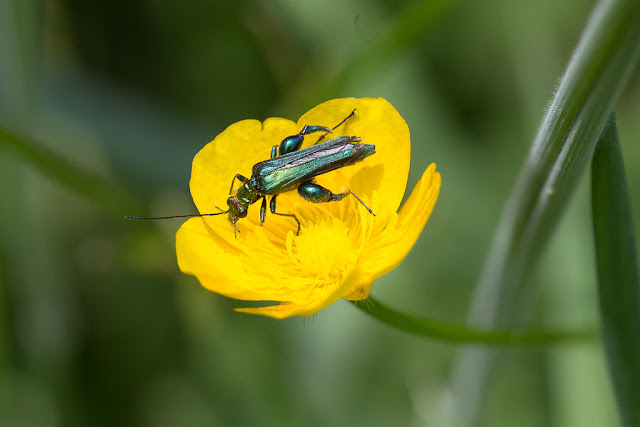 The "David Bowie" beetles are back again. This one looks like he/she lost an antenna.

Olga took a few mudbaths during her walk, as usual, but by the time we began heading home she was pretty much white again. I was so happy that I wouldn't have to bathe her, and I deliberately steered clear of a few rivulets and puddles so she wouldn't be tempted. And then... 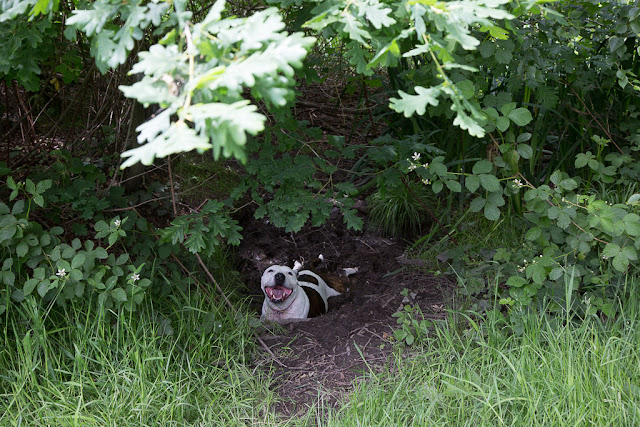 ...she found a hidden bog I didn't even know about. Bath required!

Regarding yesterday's post, I think I gave the impression that summer vacation has started for us. But no -- we still have another week of school. The seniors are finished, and many Middle Schoolers are on field trips this week, but technically we still have students through Wednesday. Thursday and Friday are faculty/staff work days. Then we're done.

As one of my helpful commenters pointed out, even then we're not entirely on vacation. Well, I am, but Dave spends a lot of his time in the summer planning and developing music for the coming year.

Apropos of nothing, I also have to say a quick RIP for my Human Rights Campaign hat, which I bought in Provincetown back in 2010. It was an olive green ball cap with the blue-and-yellow "equal" sign on the front, aimed at the question of marriage equality. (I was wearing it here during my selfie with Olga.) Now that issue has been decided and my hat, alas, is no more. It blew off my head on Saturday as I crossed a bridge over the Thameslink tracks in West Hampstead, sailing over the railing and into the void below. I'm sure it's still lying down there, somewhere, but I'm not risking being hit by a train to retrieve it...and it was worn out anyway. Life goes on!
Posted by Steve Reed at 6:21 AM