Caterpillars and a Collation 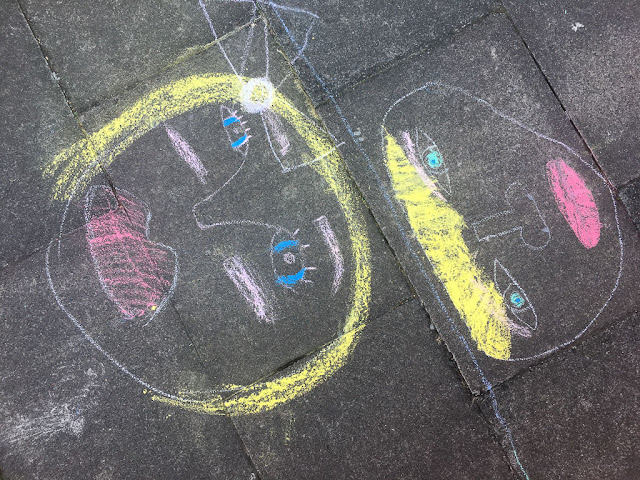 Good Lord, it is hot. At least for England. It was about 90ºF yesterday, and while that's slightly better than what I'll face in Florida in a few weeks, it's a challenge here in the land of no air-conditioning.

Dave and I visited our friends Sally and Mike in South London for a cold "collation," which, I learned, means "a light, informal meal." We popped into M&S for some beer on the way, and the store was deliciously air-conditioned.

"Let's just stay in here all day," I said to Dave.

But no, we did not. We got on the tube and went to their place near Greenwich, and sat out in the shade of their garden talking about the crazy state of politics, and pop culture and gardening and our summer plans. Sally recommended a TV show called "The Detectorists," a dry British comedy about guys with metal detectors trying to strike it rich. We haven't tried it yet, but it sounds promising.

Dave and I didn't even eat dinner last night, we were so inert and overheated. We just had strawberries and cream left over from Dave's dinner-party pavlova, and then we went to bed.

Today is supposed to be a scorcher, too, although right now, at 6:30 a.m., it's very pleasant. 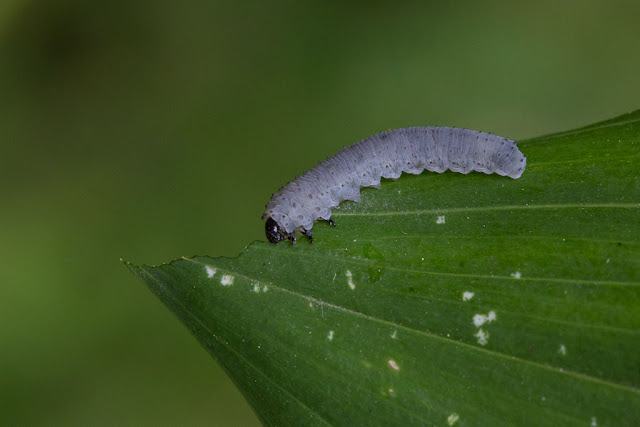 This is the caterpillar of the Solomon's seal sawfly. Who knew that such a specific predator existed? We've been noticing for a while that the leaves on our Solomon's seal were looking tattered, and then the other day I noticed that entire stalks had been stripped bare. I took a closer look and saw these guys, munching away.

At first I thought they might turn into butterflies or something desirable, but no -- they turn into black, aesthetically nondescript flies. They drop off the plant and pupate in the soil before hatching and laying eggs in the tender stems of next spring's regrowth. Thus, the cycle continues, and the plant gets weaker and weaker.

I debated what to do, but eventually I grabbed a paper towel and killed them all. I still feel guilty about it. But as much as I am into letting nature take its course, I don't want to lose our Solomon's seal. You have to draw the line somewhere, right?

(Top photo: Chalk drawings on the sidewalk down the hill from our flat.)
Posted by Steve Reed at 6:31 AM

I sincerely hope you gave those unfortunate caterpillars a proper Christian burial.

These caterpillars do well when we plant things for their convenience.

Summertime is off to a very hot start everywhere, well except here on the chilly north coast of California. Sure hope things cool down there. We watched two seasons of The Detectorists and really enjoyed it. Quirky and delightful. Stay cool there!

If only it was only going to get to 90 here! We are predicted for 117 today and 121 by Wednesday! Yes, I know it's a dry heat but it's still blistering hot. I do have to admit that 90 in London is also a bit extreme. I can't even imagine it.

yes, you have to draw the line somewhere and mine is at poison ivy that is colonizing the shop fence. I actually went out and bought an herbicide, me who is totally against poisons, though I haven't sprayed it yet. as for the weather, we are already in the 90s in June! must mean triple digits for July and I can't even think about August.

Still winter here, Raining all day everyday, very cold, the furnaces blasts from morning till evening when we get under the covers with hot water bottles...so Odd, we have generally had similar weather as London. Still wearing boots and several layers. Yes, a line drawn is sometimes needed! Mr Man tore out all of my nasturtiums because Aphids...not enough lady bugs to do the job. That was a rather bold line! Still, whatever - not the biggest problem in the world today!

We're having a heat and humidity wave at the moment too - 88 by the thermometer but with humidity it's 98! We broke down several years ago and got two window air conditioners, which we only use in the worst heat. Our July/August weather has gotten hotter the last few years or maybe I just can't take it as I get older.

Not sure whether I could squish those caterpillars or not - I'm gagging just thinking about it! It's a quicker death than poison, but - blech - so messy!! I wonder if there's a way to use insecticide on the eggs or pupae instead? Something is eating our butterfly bush and it is in bad shape. Plants are almost as bad as pets with things going wrong :) lol

I had to laugh at Red's comment. Some years it sure felt that way growing tomatoes :)

That is one industrious caterpillar, but I'm with you. Get rid of...

Very hot here too...last night i worked and smelled like an old docker by dawn!

The title of the film is, The Horse's Mouth. It starred Alec Guinness. Near the beginning of the film is some sidewalk art. If you like to watch films where folks cut at each other with sharp swords, this is not the film for you. If you love the introspective world of art and artist, you'll love this film. “Too many feet I tell you. They gonna lock you up Jimson if you keep turning out things like that.” I paraphrase but that's close. The artist who is the subject of the film is a real British artist. I think his work is/was brilliant.