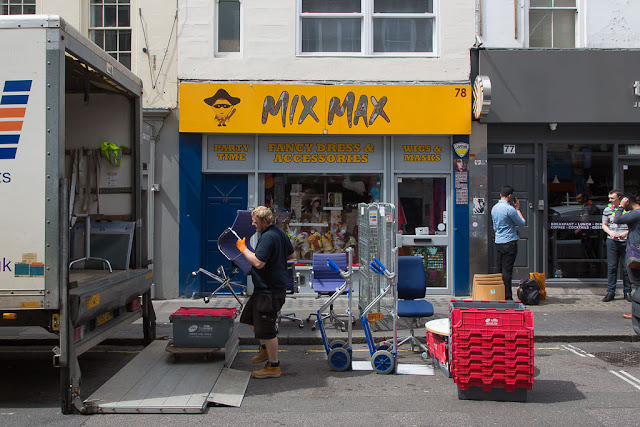 We're having some rather inclement weather this morning. It's been furiously windy all night and the poor Maltese Cross flowers have been beaten almost horizontal. They'll perk up in a few days, though. This morning the tiny gray tits are on the bird feeder and the squirrels are running their "highway" atop our garden fence, so life goes on.

Which is what happens when things get rough, right? They're rough for a while and then life goes on. A lesson I could apply both to this week's events at London Bridge and our struggles with Dave's illness. Nothing is permanent. All things change; all things pass, one way or another.

Thanks for your comments yesterday regarding Dave's Crohn's. I don't want to sound like I'm frustrated with Dave -- it's more the illness itself, although as I said I do think we need to do a better job of management. I'm sure I'm not half as frustrated as Dave is. Maybe once this week is past and his last two middle school concerts are finished (tonight and Thursday) we'll have more time to focus on how to approach the doctors in early July.

He's not completely laid-out. We were talking last night about what to do for his birthday and he's got his eye on some Michelin-starred restaurants, where he says he will indulge in the wine pairings. It's all about priorities!

As for terrorism, I think Jenny O is correct in her observation that many young men are susceptible to a kind of extreme group-think, the camaraderie of a united effort that promises to bring "righteousness" to the world as well as money and fame and women to those involved. I'm sure young men who are otherwise relatively powerless in their lives are particularly vulnerable.

Speaking of terrorism, am I the only one who dislikes Facebook's "I am safe" feature? I mean, I know people are concerned -- and I used it for the first time on Sunday, because I was asked, and I could conceivably have been in the part of London that was attacked. But marking myself "safe" after such an incident feels very egotistical. "There's been a terrible disaster but I'm fine!" The odds that I as an individual would be involved in a random attack (especially after 10 p.m.!) are vanishingly small, and marking myself safe seems to claim it in a way that feels inappropriate.

It looks like it's raining now. Olga is not going to want to go on her walk.

(Photo: Loading furniture in Soho.)
Posted by Steve Reed at 7:08 AM

I must admit that I do not have the intellectual capacity to figure out what the hell is going on with these mad men - nor can I imagine what the future holds. As for Facebook, I have no idea what the "I'm Safe" button means. Instinctively, I have always felt irked by Facebook as a platform for narcissistic self-indulgence and from what I have read Facebook has often helped the mad men to communicate with each other. Final thought - Why do the authorities allow "the dark web" to exist? Surely they could obliterate it so that never again could it facilitate criminal activity and wickedness.

And yet, Steve, as soon as I heard about the attack, I wanted to know that you and Dave were safe. And where did she go to see if I could get that reassurance? Facebook. Glad you're ok. And glad London is feisty.

Yes. Same as Angella. I wanted to know if you and Dave were fine and I'm sorry but that's the way it is.
Young men are wired to band together to go and hunt the saber toothed tiger to protect the community.
There are no more saber toothed tigers.
There are perverted religions and other perceived threats. There is mental illness. There is a lack of coherence about what a community is. There is...
I don't know.
I know nothing.

Hi Steve, While I was still working a colleague's wife had Crohn's and at one time she was so bad that virtually all she could eat without pain was honey. Because of my job I had been sent a crate of Greek honey, which I happily donated (I hate the stuff) Perhaps Dave could give it a try? (obviously not excluding other foods) and if he wants a drink how about mead? Must go. My lunchtime wine is waiting...and it doesn't like being kept waiting!

I hope that you can come up with some solution for Dave's Crohn's. It's not a very nice condition and rell gets you down.

Agree about the "I am Safe" thing. You are miles from Borough Market and it was in the evening when you and Dave would be tucked in anyway. That you were in any danger did not cross my mind. Crones is more common that ever it seems, my Mom had it though only mild flare ups, there seems also to be more research going on, and medical MJ has become a pretty great advancement for all sorts of illnesses. Legal here , for now, has been helpful for fibromyalgia, cancer, crones, and PTSD to mention but a few. Good luck with that, still so much stigma re: MJ- like "Oh yeah, Dude, wanna get high?" As for young men and their penchant for gang mentality, I understand it.

haha not crones, nothing distressing to say about crones

I'm not a fan of Facebook and don't use it except for occasional contact with a niece and nephew with whom I would never talk otherwise. Maybe the I am Safe feature is for people who have so many friends they can't possibly call them all?? I don't have that number of friends :)