A Smattering of Politics and Aphids 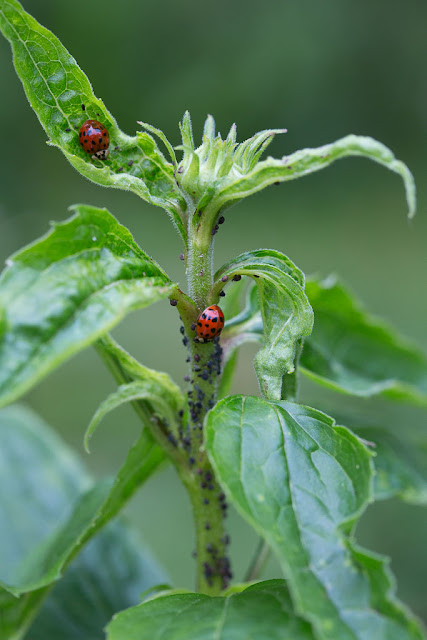 By now you've probably heard about our election results here in the UK. When will these politicians learn to stop calling unnecessary elections that ultimately don't go their way?!

Dave and I, being newcomers to the British political system, are still unsure what it all means. But Theresa May has certainly weakened her position and that of the Conservatives. I'm not sure Brexit can be stopped, but it looks like we'll now have more of an opposition voice in crafting the details of the departure -- which sounds to me like a good thing. Not to mention more influence for Labour overall, and I am definitely a Labour sympathizer.

I'm also happy because our local MP, who's a Labour representative, kept her seat, and we like her. Whew!

I am cautiously optimistic.

Let's talk about something I do know about -- the garden. Our echinacea plant is larger this year than it's ever been (above) and it's attracted both aphids and ladybirds. Because we don't use pesticides we have several plants that are aphid magnets, but the ladybirds work hard to keep them in check. We bought three echinacea plants a few years ago and this is the only one that survived -- we had to put it in a pot because the slugs went after it with such vigor. And it looks like this year we're going to get a flower! 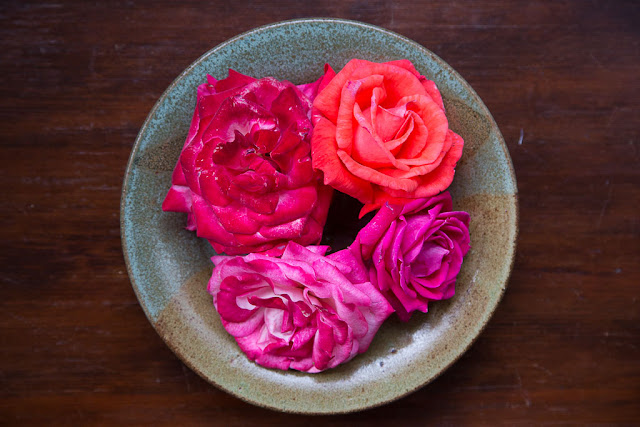 When I came home from work last night I spent about an hour tidying the garden. I swept up windblown leaves and dead-headed all the roses, and although these blossoms are loose and fading a bit, I put them in a bowl to enjoy for one or two more days. I usually let roses stay on the bush right up until the petals begin falling. Dave, on the other hand, is an over-enthusiastic dead-header -- he chops blossoms off almost as soon as they're fully open. He's like Morticia Addams! I tell him, "Dave, it's called DEAD-heading. The flowers are supposed to be DEAD first."

We asked our landlord for permission to remove a small holly tree at the side of the garden -- it's a spindly and ugly little thing, and it doesn't have enough space where it's growing. We even agreed to pay for it. She said yes, so we'll look into that in the coming weeks. Mrs. Kravitz will be thrilled -- she has complained in the past that the holly drops berries on her trampoline!
Posted by Steve Reed at 6:58 AM