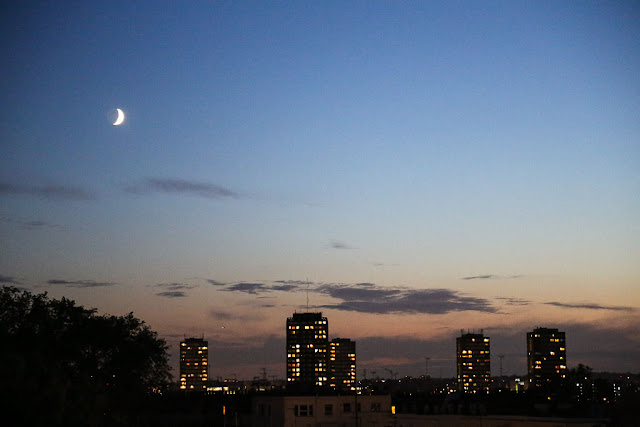 This picture shows the view looking west from the bedroom window of our old apartment in Notting Hill. I took it at sunset on June 24, 2012.

Little did I know that almost exactly five years later, the 24-story building front and center would become an unbelievable inferno. Yes, that's Grenfell Tower, which made international news yesterday when it rapidly went up in flames, only a year after a £10 million renovation, killing at least 12 people and injuring many more.

When I pulled up The Guardian's web page and saw the news yesterday morning, I was stunned. In fact, stunned is an understatement. I don't recall ever seeing a fire -- certainly not in a residential building -- as large as this one, even on the news. Although the World Trade Center was obviously a much bigger structure, the visual similarities to Sept. 11 -- a tall, blackened, flaming ruin with desperate people waving from the windows -- couldn't be overlooked. All I could do was exclaim, "Holy sh*t!" (Which alarmed Olga.) I mean, I know this building -- Olga and I used to pass beneath it when we strolled over to Latimer Road, one of our regular walking routes from Notting Hill.

I didn't see or smell any evidence of the fire firsthand -- not from where we now live in West Hampstead.

The idea that a newly refurbished high-rise in a country like the UK, with no shortage of building codes and safety regulations and architects and engineers, could not only catch fire but burn as fiercely and extensively and quickly as Grenfell seems impossible. Doesn't it? Earlier London tower fires, like the already legendary Lakanal House blaze of 2009, pale in comparison.

Of course we aren't yet sure what happened at Grenfell. Was it faulty design, faulty construction, faulty materials? A combination of all three? Perhaps cladding, adhesive or insulation was of an improper (and highly flammable) type? An expert in The Guardian said that under current rules, insulation beneath cladding on the exterior of tower blocks doesn't need to be fireproof. I've heard people say the blaze may have been fueled by gas lines. No one really knows.

All I know is, that tower went up like it had been dipped in gasoline. "Like a matchstick," as one of the survivors said. It is a colossal scandal.

Before this occurred, I never would have been hesitant to live in a high-rise. In fact, I kind of wanted to live in one. My friend David lives on a high floor in a building in New Jersey and I've always envied his view. I would have just assumed (foolishly) that modern technology, fire codes and alarms and sprinklers and whatnot would keep me and my neighbors safe.

Now, I'm glad I live on the ground.

Someone has some serious 'splaining to do. And I'm guessing we're going to be hearing about lawsuits and possibly prosecutions for years and years to come.
Posted by Steve Reed at 6:07 AM

A shocking tragedy for all concerned and you're right. I hope the truth is not buried along with the victims.

The more I read, the more shocking it becomes. I'm stunned by how quickly it went up, by how few people we are hearing were rescued or found dead. That leaves a lot of people unaccounted for. It's very sad. What a horrible way to die, and how hard for the people who had to watch, unable to help.

For the lost ones in Grenfell House... Rest in Peace my unknown friends.

Truly a tragedy in every sense of the word.
After years of living in single-family homes in which whatever befalls us is our own darn fault, it's going to take some adjustment on my part to move to a building where my fate is tied to the behavior of those next door and overhead.

In this case there should be lawsuits. I read that tenants had voiced their concerns about the lack of safety measures. Just such a horrible loss of life and I am sure very severe injuries. Tears for all those affected and their families.

It's simply unbelievable in every aspect.

Your third last paragraph says it all. These things aren't supposed to happen.

Every time I see the picture of this building burning I too am reminded of the World Trade Center. It is heartbreaking. Our neighbor in New York was one of the firemen who lost his life that day. His name was Michael Fodor, and I think of him often. The bravery of the men and women who rush into buildings like this is simply amazing.

I could not help but think of how the twin towers burned. I'd never before seen such a blaze. May those who died find peace, and those who are injured find healing. Somehow, as I watched the news of the fire, I thought of you. I knew you'd photographed that building.

You've expressed in words my exact reaction. I actually opened The Guardian on line yesterday too and when I saw the video, exclaimed out loud. I can't recall ever seeing a high rise burn like that. I saw flames everywhere. When I worked in both St. Louis and Chicago, I lived in high rise buildings and I loved it. It never occurred to me the place might burn like matchstick.

"The government's mania for deregulation." from your last link.

greed. in the end it all comes down to greed. someone or many someones. safety is too expensive, we won't make enough money. when the last human dies there will be no one to chisel the headstone that humanity died from greed.

Fire was one of my biggest fears when we lived in an apartment - and our building only had three floors!

I heard yesterday that someone who lived there said there were no fire alarms or sprinklers. Sounds like a tragedy waiting to happen . . and then it did. London has had more than its share of disaster in the past 12 months.

My heart goes out to all the residents there. I lived in a 20-storey building for about three years. My daughter was born in our flat in a pool, it was a water birth. It still remains one of my happiest moments. When I saw the pictures yesterday I immediately thoughts of the families who have similar nice memories like mine and yet they have now to live this horror.

I agree with you. Someone has to be held accountable.

Thank you for posting the photo. It really helps to have this perspective to see what was lost. So incredibly sad.

Serious 'splaining is the understatement of the century.

This is the 21st century and the circumstances leading to this terrible disaster should have been largely preventable.

However there is always the age-old business of short cuts, blurring the lines of inadequate legal requirements and wherever possible increasing profits.

At the expense, in this instance, of people living in high rise public housing. There will undoubtedly be a lot of finger-pointing and running for cover and obfuscation. None of which will be do anything for the people who have lost their lives or those who survived the disaster.