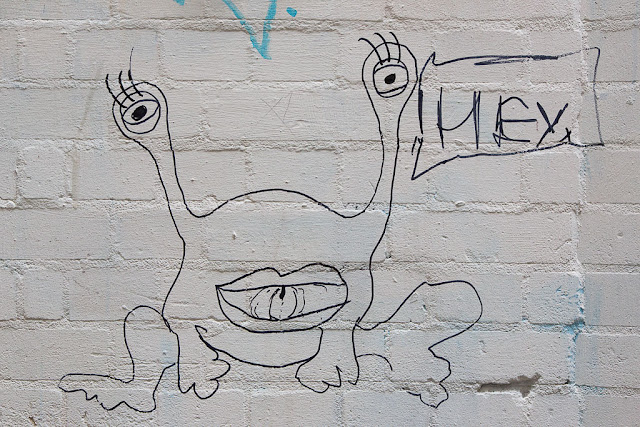 Here's a little story about the strange places the Internet can take you.

While walking in Soho a couple of weekends ago, I came across this graffiti scrawled on a wall. It sparked something in my memory -- I was pretty sure I'd seen this image before. So I took a picture of it, intending to do some research.

I eventually remembered seeing similar graffiti in a photo from the USA, taken by one of my Flickr pals, Jake Dobkin. I'd marked his photo a favorite years and years ago, and I hadn't seen it in ages, but I went searching and eventually found it.

Jake's picture is from 2005, and indeed it is a very similar image, though his frog is bigger and much more polished-looking. Someone wrote beneath it, "Daniel Johnston!" I figured that must be the artist, and I did a Flickr search for more frogs by him.

As it turns out, there are many -- but mainly all pictures of the same piece, located in Austin, Tx.

So who is this Daniel Johnston? It turns out he's a musician, and he recorded an experimental album in 1983 called "Hi, How Are You." Its cover featured a frog, known as "Jeremiah the Innocent." As Wikipedia reports, the mural in Jake's photo dates back to 1993, when a Sound Exchange record store asked Johnston to paint the frog on the outer wall. The record store is long gone, but thanks to neighborhood activism, the frog remains.

Although Johnston's album is pretty obscure, the "Hi, How Are You" frog had a surge of popularity in the early 1990s, when Kurt Cobain wore a t-shirt bearing the image. Here's a photo -- the last one in this inane article on Cobain's height.

In fact, the frog is so iconic in Austin that you can still buy "Hi, How Are You" t-shirts from an online outfit called Officially Austin.

Johnston's album itself can be heard on YouTube. I gave it a listen, briefly. It sounds pretty avant-garde -- as a commenter wrote beneath the video, "I feel like this is how a mental illness sounds like." (Johnston apparently has had some mental illness.)

So, anyway, apparently some fan of Johnston -- or at least his frog -- came through Soho not too long ago and left an homage on a wall. Not a very accurate homage, artistically or linguistically, but close enough that I recognized it, and it led me to learn a whole bunch of stuff I never knew before.

You're welcome!
Posted by Steve Reed at 6:58 AM

Your delving research suggests you should either be a librarian or work for Britain's "Prevent" scheme. You'd soon root out those pesky extremists.

I have no idea why but images like that freak me out.
But good Lord! What a story and how amazing that we have this internet to be able to do what would have been months' worth of research in a few hours if you're persistent- which you are!

That was a lot of interesting research to satisfy your curiosity.

This kind of thing is one of the reasons I adore you. You're blushing. ;)

Absolutely cool! I love the internet for that too - although I must admit that Mike is MUCH better at ferreting out information than I am. I just say, "I wonder..." and he's off & running :)

Many times I've done exactly the same thing trying to research something and ending up learning all sorts of things I had no idea I needed to know. I have one reader of my blog who never comments but, he sends me emails about research he's done on some subject I've posted about. I swear he could work for the CIA because he finds the most interesting things after I've done what I thought was an exhausting search.

Now that IS cool! I go down rabbit holes all the time and it's time-consuming but occasionally very rewarding, like your journey :)

Bwell you learn something new everyday!

A wonderful journey inspired by a frog! I have a blog post about a frog today today.

Thank you for stopping by The New Dharma Bums today. I so appreciated hearing from you, Steve.