Not BC but SC 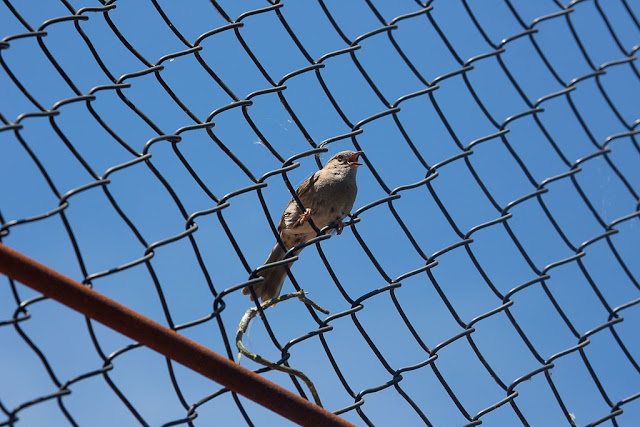 Yesterday I got a call from the dermatology clinic at the Royal Free Hospital. Remember the presumed basal cell carcinoma on my forehead that they biopsied a few weeks ago? Well, it turns out it wasn't a basal cell -- it was a squamous cell, which is slightly more serious. Still nothing to worry about, the guy on the phone assured me, but they need to do surgery to remove more of a margin because squamous cell carcinomas, unlike basal cells, can metastasize and spread.

So now I have an appointment for June 29 to remove the rest of it. (If there's any left I can't see it, but I can understand how they might need to take more tissue just to be sure.)

What's going to make this especially interesting is that I leave for Florida six days later, and I need to have the stitches removed after about a week. So either I have to a) find a clinic to remove the stitches in Florida, or b) have them removed here a day or two early, or c) ask the Royal Free to use dissolving stitches, which they apparently don't like to do.

And I'm going to go to Florida looking like Frankenstein. But at least my remaining squamous cells will be whipped into shape. (Squamous is kind of a gross word, isn't it?) The dermatology guy said this type of lesion comes from years-ago sun exposure, of the kind I certainly received while growing up in Florida. 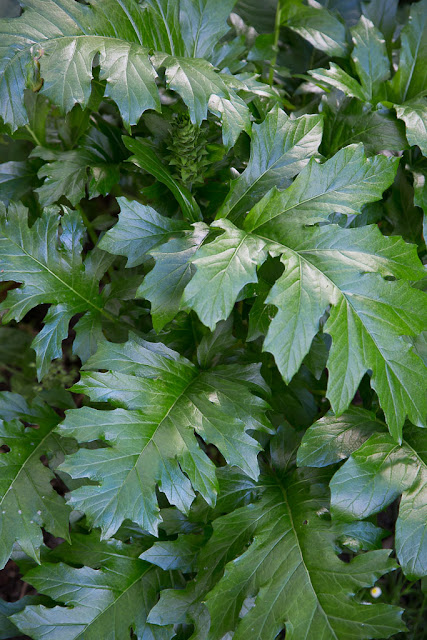 On the bright side, remember the acanthus we rescued in early April from the house down the street? Well, that leafless clump of roots has grown into the plant above. Kind of amazing, isn't it? There's even a little flower spike, which you can see in the upper part of the photo -- hopefully later this summer it will mature.

Also on the bright side, my sensitive tooth is better since I started using the Sensodyne. That stuff really works!

Today's the last day of the school year with students -- and it's only a half-day for them. Almost all our overdue books have been returned. Hopefully the five or six remaining dawdlers will turn in their stuff today so they don't start next fall with blighted library accounts. In past years we've successfully retrieved everything, so I'm keeping my fingers crossed!

(Top photo: A bird chirping on a fence along the Regent's Canal, last Saturday.)
Posted by Steve Reed at 6:51 AM

They MAY tell you that you can remove the stitches yourself. (Or have Dave do it.) Just don't poke your eyes out with scissors in the mirror; then you'll have a whole new problem :)

It's good that they did the biopsy. Sounds like they're looking after you well.

That plant is doing amazingly well.

Really? You'll look like Frankenstein? With the brain insertion stitches AND a bolt through your neck - I don't think so Steve. I think you are being over dramatic here.

I'm rather hoping the remaining squamous cells will be whipped into oblivion and you won't ever have to utter that gross word squamous, ever again.

A less than empathetic

That plant is wonderful and no, you will not look like Frankendstein! Glad the tooth is feeling less sensitive.

I have a friend who had a squamous cell place removed on her arm. She took the stitches out HERSELF. But I can see why you'd be upset about this. It is a nasty sounding word.
I'm sorry.
It'll be all right, one way or another.

I had two SC on my "trunk" and they took quite a margin to assure they got it. I would be careful with the face.

Good luck with the surgery. I would not take the stitches out too early. Surely you can walk into a surgery in Florida and ask to have them removed? Should not take long and surely won't be too expensive? That way, you make sure it's all sterile and proper.

Our acanthus started flowering this morning. What a sturdy one you have!

You've got some good news and ad news on your skin condition. I hope things go well with the treatment and that you recover quickly.

I think you'll be able to find someone to remove those stitches for you when you're in Florida. Roger (my husband) had a squamous cell carcinoma removed a few years ago. He's pretty squeamish about needles and sharp things near his eyes (or anywhere else for that matter), but the doctor and staff were so good and thoughtful. It made the whole experience pretty endurable. I'm hoping that the same is true for you. Take care.

I had my friend David remove the stiches on my back after a basal cell was removed and he has no medical experience at all. However, having them on your face is another matter. I'm sure there will be someone in Florida who can do it.
That plant looks like it LOVES being at your house.

There will definitely be someone in Florida who can remove your stitches, but is it a possibility to delay your departure by a couple of days and have the whole procedure completed before you travel? I bet the airline would understand. In any case, good on you for being conscientious about following up. And that plant looks amazing.

Sorry to hear about your squamous growth Steve but thank heavens for the NHS professionals who spotted that the thing wasn't as benign as first supposed. Why don't you take the stitches out yourself? I am sure John Wayne and Clint Eastwood would have had no problem doing that and you are an American hero too... aren't you?

I am so glad you will have your treatment finalized and I agree that any walk-in in Fla. could take out the stitches.
Your acanthus looks extremely healthy and happy. Another rescue success!

Jenny O: They were pretty specific in the past that I must have the stitches removed by a medical professional. I'm sure that stems from an abundance of caution.

Alphie: We shall see! Stitches in my forehead may LOOK like a brain insertion! LOL!

Ms. Moon: Well, it is what it is. I'm actually not THAT upset. Just resigned!

Utahdog: Well, there's not much I can do to be careful -- that's up to the surgeon! One can only hope they know what they're doing.

Sabine: It probably wouldn't take too long, but knowing the USA, the expense is unpredictable!

Robin: Thanks for the encouraging words! I'm glad to know others have gone through similar experiences. I'm sure they happen all the time, actually.

37P: Oh, I don't think I'd want to try changing my airline ticket. That opens up a web of complications! If worse comes to worst I'll just have them taken out in Florida, one way or another.

YP: Yes, this is true,. The NHS came through for me!

Cheryl: Indeed, I will be glad when it's over!