Childs Hill, a Dinner Party and a Calamity 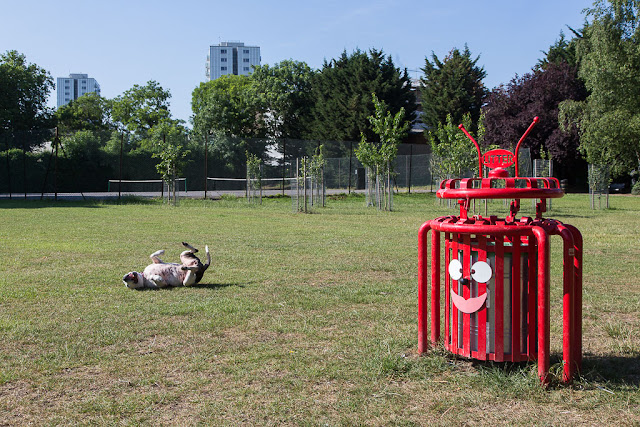 My dog is so weird. (Exhibit A: Photo above.)

Yesterday morning she and I walked to Childs Hill Park, an area north of where we live. We don't go up that way very often, but Olga seemed very certain about where she was going, pulling me this way and that. I don't think she had any idea, but she pretended she did.

In the background of the photo above you can see a couple of council tower blocks covered with cladding. I couldn't look at them without thinking of Grenfell Tower. I suppose councils all over the country, and probably the world, are re-evaluating the cladding on their buildings as we speak. At least, I hope so.

Last night, Dave and I had four friends over for dinner. I'm posting a bit late today because I just spent a couple of hours cleaning the kitchen and dining room. When Dave makes a five-course meal for six people, you wouldn't believe the number of dishes generated. We're on our third dishwasher-load now, and I did the rest by hand. But the meal -- an amuse bouche made with caviar, followed by cold white gazpacho, lobster newburg, chicken jardinière and a pavlova for dessert -- was quite amazing. Did I marry well or what?

My moment of mortification came when one of our dining room chairs collapsed beneath one of our guests, who is very big and tall but not overweight and certainly not accustomed to furniture failure. I believe my first response may have been "Did the chair break?" I honestly didn't mean that as an indication that I wasn't concerned for him, but I guess I took it for granted that he was fine. We have carpeting. Still, probably not the most caring thing to say!

So now one of my summer projects will be chair repair. Fortunately, the chair seems OK -- the joints simply became unglued, and I know exactly why this happened. We took the chair into the backyard at the beginning of the evening, and it sat on uneven ground, which, beneath our tall guest, led to uneven weight distribution and strain. Lesson learned: Keep dining room chairs indoors.

Still, it was wonderful to sit outside yesterday evening before dinner, with some prosecco and our caviar nibblies (apparently some caviar, like ours, is quite inexpensive). We also had thinly sliced, smoked ham and chorizo which one of our guests, who lives in Madrid, brought from Spain. Another guest brought several bottles of good French wine. The weather was beautifully warm and sunny, and everyone was out -- our upstairs neighbors, the Russians, had guests over and they were all sitting out on their terrace, and our neighbors a few doors down were playing volleyball in their garden and speaking some unidentifiable (to me) language. Piano music wafted from the windows of the apartments behind us. Magical London, a global crossroads!
Posted by Steve Reed at 8:20 AM