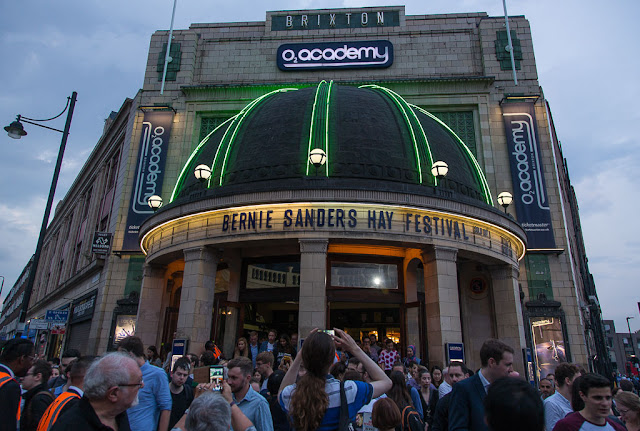 Dave and I went to see Bernie Sanders speak at an appearance in Brixton last night. This was a crazy evening -- a few weeks ago I heard about Bernie's upcoming appearance from a coworker, and I told a few other coworkers, and before long a whole web of people were going. I got invited to not one but three pre-parties, which put me in a bit of a quandary about which one to attend! I finally met up with Dave at his coworker Lisa's house, where I only had time for a few slices of frozen pizza before we had to make our way to the theater (above).

Bernie reiterated his political philosophy about the need to redistribute wealth downward through higher minimum wage, stronger social programs and better market regulation and taxation. He chastised Trump for pulling out of the Paris climate accords and emphasized the need for international cooperation to solve our problems and maintain world peace. (He never said the word Brexit, as I recall, but he certainly implied that he isn't a fan.) He told the crowd they needed to get involved not just by voting but by running for office and helping to organize resistance to the damaging trends being funded by the "oligarchy," the super-wealthy powers that be.

He never knocked Hillary Clinton, even when asked if he thought he would have won the election had he been the Democratic nominee. He said it's not helpful to look backward, but he did point out that early polls had him beating Trump. (Of course, polls had Hillary beating Trump too, right up to the end.)

Bernie also emphasized that most Americans did not vote for Trump, and do not support him now.

It was a fun evening, and it was heartening to see so many enthusiastic people -- mainly young people -- turn out to see him. They were a solidly pro-Labour, pro-Corbyn crowd, and British politics were very much in evidence too. (Parliamentary elections are being held in just a few days.) Corbyn even sent a text message, which was read onstage to the cheers of the audience.

In other news, I had my two tiny stitches removed yesterday after my skin biopsy the week before. I had to go to my doctor's office and have it done by a nurse. Still no word on whether I'll need to return for further treatment. Fingers crossed that I'm finished!

How come you ate frozen pizza before the event? Surely Lisa could have at least defrosted it or popped it in the oven for twenty minutes. It's a pity that Bernie and Jeremy didn't appear together but Jeremy had his grilling in York along with "Strong and Stable" Mabel.

Why was Bernie in London? I don't quite get it. Anyway- sounds like an interesting evening for sure.

Surprising how there's still lots of buzz around Bernie Sanders.

Lucky , lucky! Bernie is my favorite guy though Hillary runs a close second- they both would have been brilliant, Hillary would have received the same if not worse treatment from an obstinate house and senate, For her sake I am glad she was spared that struggle.She is loving being a grandmother and having time to be with the people she loves, Her life is a good one - she will likely live longer for not being in the middle of republican obstruction and barbs- so hateful.
Love the theater! I will have to find it when there! Hope that you and Dave and Olga will come to my tiny flat for tea!

I love Bernie Sanders. I was so disappointed that he wasn't the nominee.

What a great opportunity. I would have enjoyed hearing him speak too. I watched the PBS new hour last night as they pointed out that nearly everything Trump stated (read from a prepared statement) about leaving the Paris Accord was a lie! They of course, didn't use the word lie, they just stated the true facts.

The Bern had a tremendous following among young people in the USA and raised an unbelievable amount of money from tiny individual donations. He is the alternative to both Trump and Clinton who doesn't get talked about very much. Sounds like a really interesting evening!

I like Bernie's policy position and would have voted for him had he been the candidate but I was never enamored of the guy. I don't think he would have been successful unless he had a democratic congress because he's too radical and would have met the same opposition Obama met. Plus, he was never a democrat until he decided to run for president so he could use the resources of the democratic party. I found that to be a little insincere...I won't stand with you day to day but I will use you to further my agenda. Instead of muscling in on Hillary's support he should have run as what he is, an independent. I still think HRC would have been a great president and would have been able to accomplish things.

I wish I'd known he was in town! Heard him speaking on Radio Four not so long ago and he sounded so articulate. So does his brother, by the way.

The sad fact is Bernie is too old to run and be elected. The dems, as pathetic as they are, better find their act before a year is up.

YP: Yeah. when Jeremy sent his text, they made a point of saying it was coming from York!

Ms Moon: He wrote a book, a copy of which was included in the ticket price. So I guess this drums up publicity both for the book and Bernie's agenda.

Red: Well, he's got the right idea about a lot of things, and he's not afraid to say it!

Linda Sue: I'm sure Hillary is doing fine, but I'm also sure that given a choice, she'd have opted for the presidency!

Jennifer: I like him too, and I definitely think he's correct about a lot of things. But I think he's too fringe-y to be elected. I just can't imagine him winning. Of course, I said the same about Trump!

Jenny-O: It was interesting to see that the youthful support for Bernie in the States carries over here. I think his message really appeals to young people, who are trying to start out in life with a lot of things stacked against them.

Ellen: I agree. Given a choice between the two, I'd still opt for Hillary.

Cuban: He is very articulate and he's a very energetic speaker.

Fish: I may be wrong but I don't think he intends to run again. I think he just wants his message, his ideas, to be part of the dialogue. He raises very important points about the plight of working people and the huge transfers of wealth to a tiny percentage at the top of the economic ladder.

I did vote for Hillary because I thought she was the most qualified, but I'm glad Bernie is out there letting the world know that the US isn't all a bunch of xenophobic morons.