A Peacock, Soot Sprites and a Theft 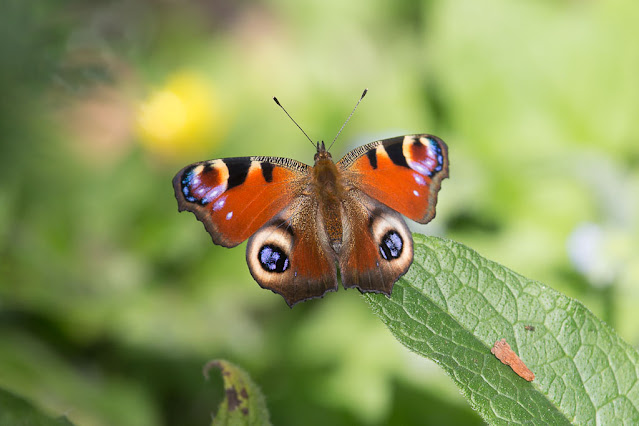 A peacock butterfly passed through the garden a few days ago, and I had time to run for the camera and get some shots. We haven't seen any since the beginning of April, and I'd wondered how they fared through the subsequent cold snap and then the warm, dry spring. Short answer -- they're still around!

I took Olga for a walk yesterday along Billy Fury Way and found dozens of bales of recent newspapers (the Evening Standard) discarded in the woods beside the railroad bridge. So annoying! There must have been a thousand newspapers or more. I suspect someone is dumping unwanted copies from the nearby Finchley Road & Frognal overground stop (where they are usually handed out to passengers, whose numbers have plummeted since Covid-19). I took pictures and wrote to the Standard's head of circulation, who wrote me back fairly promptly and said there would be an investigation. I mean, they're probably paying someone to distribute those papers, and I'm sure they don't want them dumped in the woods any more than I do.

I tried to report the mess to Camden Council as well, but there are no street addresses on Billy Fury Way, so I'm not sure my litter app understood my location correctly. But I tried. 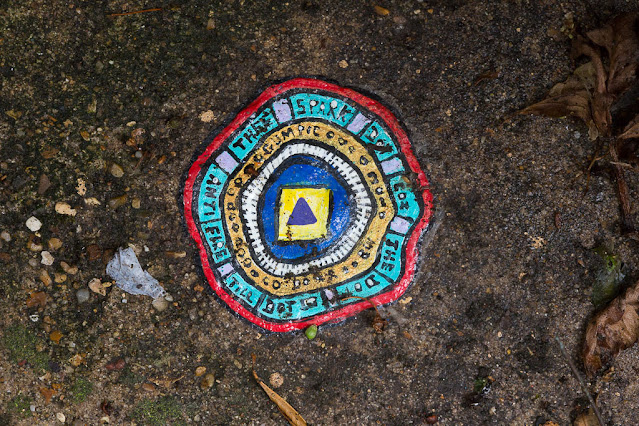 I also found a new piece of chewing gum art by Ben Wilson along the path -- new to me, at least. Wilson often lies on the sidewalk when he paints his pieces; I find the idea of lying on filthy Billy Fury Way a little horrifying, but he's apparently managed it.

One thing about walking the dog -- it always gets me out and about, which during this pandemic is incredibly beneficial. I was chatting with some of my neighbors yesterday and they talked about how cooped up they've felt. I've felt that too, of course, but perhaps not to the same degree. Both neighbors are eager to get haircuts now that salons and barber shops are about to re-open (tomorrow). Dave hasn't made a hair appointment yet, surprisingly. I think he's getting used to having it long.

Speaking of coronavirus and reopening, my new cloth mask has arrived! 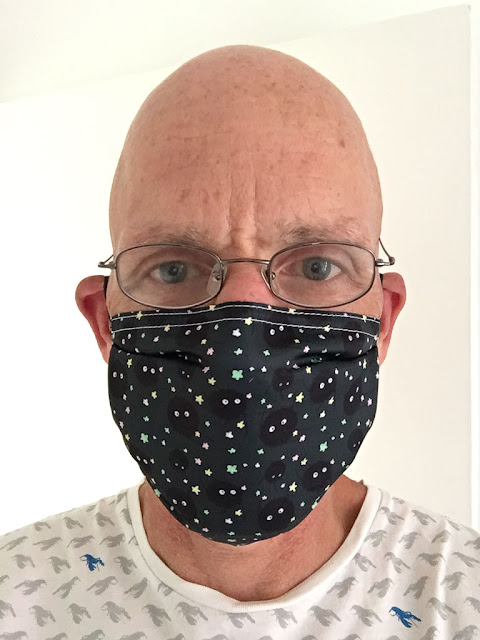 I don't know if you can really see the pattern, but it depicts the soot sprites from Hayao Miyazaki's movie "Spirited Away," which I love. The soot sprites, little round black creatures with eyes, eat star-shaped morsels of food -- also shown on the mask. (I just learned that these sprites have a name in Japanese, susuwatari. Here are some images in case you can't see what they look like.)

I'm not sure they match the lobsters on my shirt, but oh well.

Someone stole one of my dianthus plants off our front porch yesterday! I was so surprised I walked up and down the street to see if it somehow wound up outside someone else's front door. It seems like such an unlikely object for intentional theft -- it still had plenty of flowers, but it was getting a bit leggy and it was only in a plastic pot. Fortunately the thief did not take two other plants (including another dianthus) or a hanging basket that we also keep out there. Very bizarre.
Posted by Steve Reed at 6:21 AM