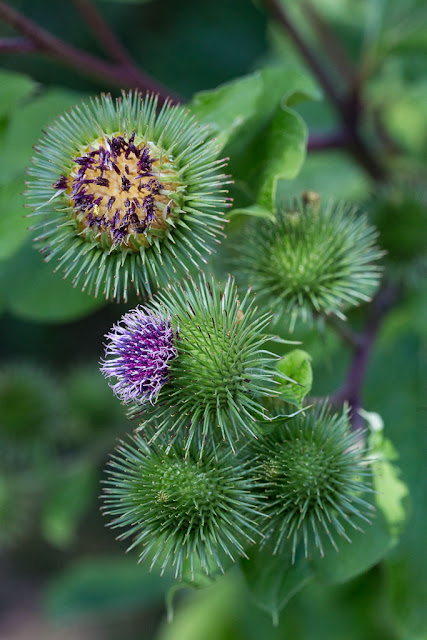 Some of you may be wondering (no?) whatever happened to those burdock plants I grew from seed last year.

Well, here's an update. Some of them, as you can see above, have sent up stalks and bloomed, with their little velcro golf-ball seed pods. 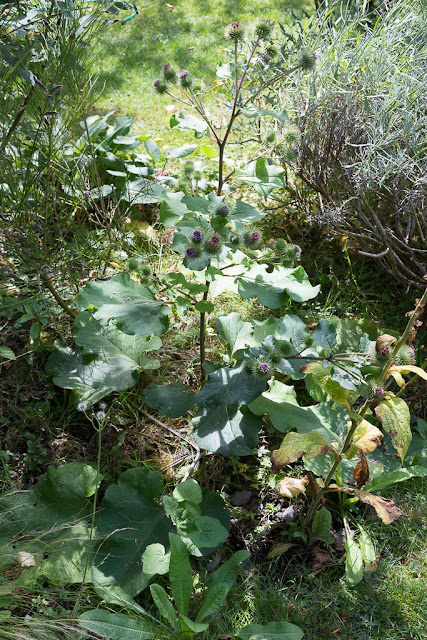 The blooming plants are three or four feet tall. 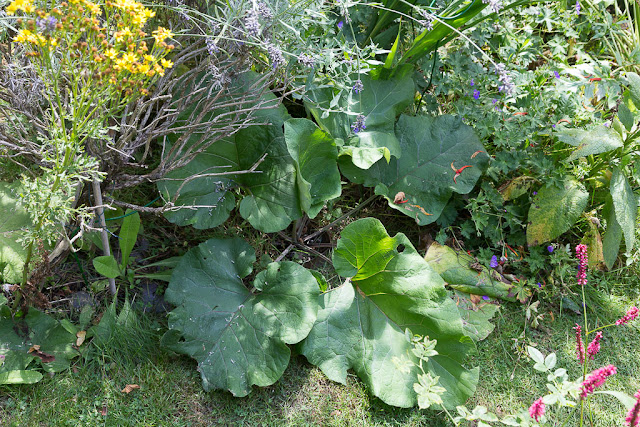 Some of them held off blooming and instead formed a bigger leaf base. I assume these will bloom next year. Interesting that they've waited. 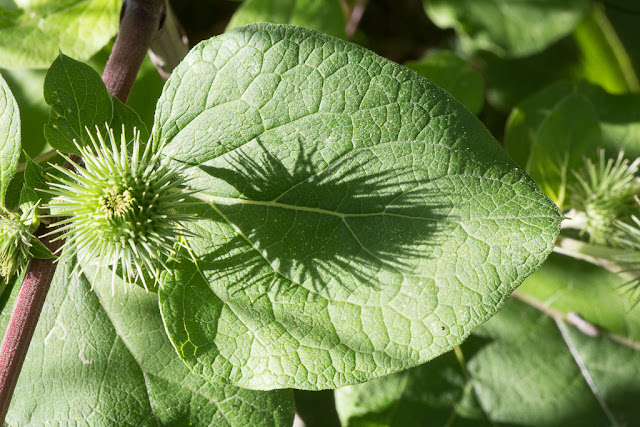 Why burdock? Well, I just like the plants. I see them when I'm out walking pretty much anywhere in the countryside, and I always thought those giant leaves were quite impressive. Apparently they're good for some insects. I'm glad to have grown them -- an interesting experiment. Hopefully they'll re-seed so we'll see more in future years. 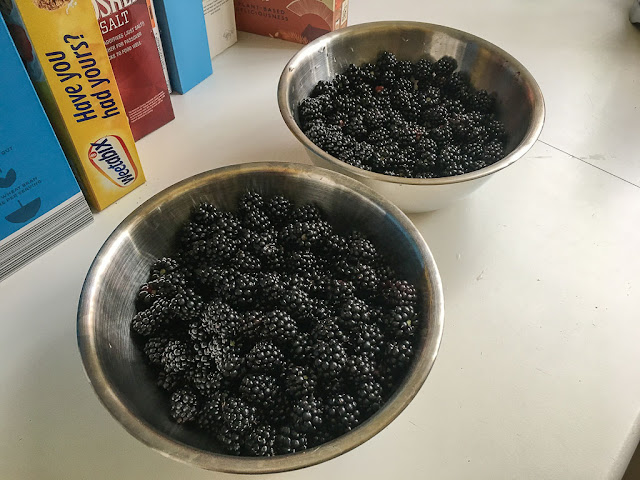 Yesterday was also blackberry bonanza! I picked everything I could reach on our blackberry vines. (There are still plenty more berries up top, out of my reach, for the wildlife.) I don't think we've ever had such a productive year. Dave immediately made... 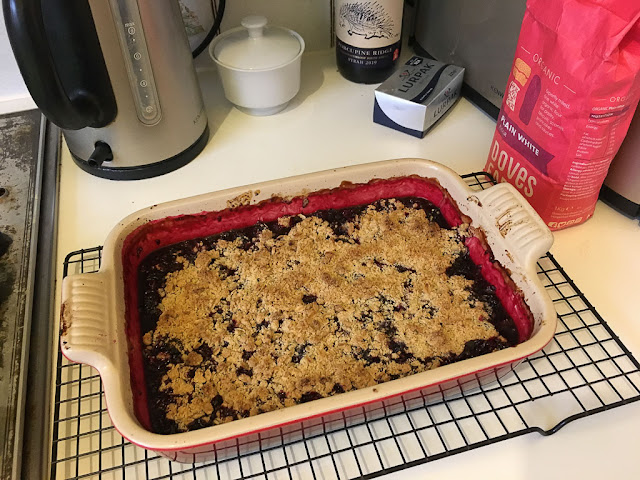 ...a blackberry cobbler, and we still have plenty left over for cereal.

I finished "The Overstory" by Richard Powers yesterday, which I loved. It's a novel about environmental activists in the '90s who are trying to prevent the logging of old-growth forests, like the tree-sitters and Earth First! activists who were in the news in those days. More broadly, it's about humankind's relationship with trees. It's a great book.

Did you hear about Donald Trump's assertion that he was scheduled to throw the first pitch for the New York Yankees at a game in August? It took both the White House and the Yankees by surprise, as he wasn't scheduled to do so at all. Apparently he simply couldn't stand the idea of Dr. Anthony Fauci throwing the first pitch at a game that day, so he decided to steal some of Fauci's limelight. The man is such a child -- and a dangerous child, to boot.
Posted by Steve Reed at 7:18 AM

The polls on Trumpet are looking good for his defeat. But as you know, it is America!

"...to boot"? Yes I would love to "boot" Trump's blooming ass. I wonder what blooming rabbit he will pull from his blooming sleeve as his blooming election defeat draws closer? Lovely harvest of blooming brambles! Our bramble harvest is only just beginning. Gold star for Chef Dave!

Every day there's more idiocy coming from Trump and his toadies. It's seriously frightening. So thanks for sharing the beauty that you create around you. Oh... Do you think the blackberry cobbler would survive shipment to Spain?

You would not like burdocks as much if Olga was a collie or other long coated dog, those seed heads get lodged in the coat and the only way is to cut them out. Blackberry cobbler however!

Two Bowls Of Blackberries And There Is More, Right On!! What An Amazing Backyard. Good On You!!

Cheers
P.S. Olga Is Clearly In Need Of A Biscuit

I do read you all blogs on a daily basis when I can. I never talk about it but I am ill and have dialysis 3 times a week that drains my energy level and keep me in the bed most of the time. I love your tour through London and all the flowers and your gorgeous back yard. I did have lots of flowers including a vegetable garden but I kept being put in the hospital and my son refuse to take the water hose and water my plants and when I come home everything is dead so I just gave up. I do have a few plants sitting by my front door and they aren't looking so good. (lol) I have an orange tree, 2 lemon trees, a plum tree, a kumquat and a loquat tree in my back yard that did survive. Only the kumquat and loquat tree are producing fruit. That black berry cobbler take me back in time because we use to go black berry picking and mom use to make them all the time. I did look at some black berries in the grocery store this week but I refuse to pay $4.68 for a small pint size of black berries. You are doing great to have them in your yard.
By the way that orange thing in the white house was on tv this morning talking about he doesn't know why people doesn't like him but he is usually saying the same thing the doctors are saying. He just lied about that. He need to go sit his lying ass down somewhere. Majority of people don't care to like liars especially when it is harming everyone. By the way Donald Trump Jr. got his twitter account cancelled for reposting what this lying butt doctor is saying about her cure for the coronavirus. The hydrochloroquine story. I assume he was trying to help his lying dad out. They need to cancel that orange thing account and help shut his lying ass up.

I want cobbler too! I was going to say that maybe we should try burdock as a ground cover plant in this weird rocky area by our house, but Peter has dissuaded me because when it's not summer The Roy has a very thick long coat. Also, who knows if it would grow in NC?

I'm so hopeful and terrified about the election. 2016 shook any faith that I had in humanity, so I won't hold my breath. I'll just hyperventilate instead. Ha!

Blackberries are a favorite of my wife. We don't seem to have them here.

That cobbler looks delicious! I can't believe how much fruit you got from your vines.
The photos of the burdock plant are great. Those leaves look like they would hold water for a while after a rain.

Yay on the blackberries!
I read a thing about what it will feel like to wake up and not have Trump in the White House. My reaction? IS THAT POSSIBLE?
I’m going to hold on to that thought.
It seems to me that he’s committing crimes that in normal times would get a president kicked out but here we are with no seeming recourse but to shake our heads in confusion and despair.

The little nubbins on your "weed", are pretty cute right now, not so cute in Autumn. It grows wildly along the beach, the dogs had to go to the vet a couple of times because they lodged deeply into them and caused infection But those were wild, not cultivated in a gentile English garden- that is likely the diff. Yours are cute.
Our blackberries are still not yet edible. Your bushes are quite prolific! Enough for a cobbler AND for cereal. I see Wheat-a-bix- , yum, little straw stacks!

The Overstory sounds like a book I should definitely read. I keep putting it off, but it sounds so good.
Your blackberry cobbler looks delicious.
Everyday is a new nightmare story about the dangerous man in the White House. I'm so worried about the coming election. And why do I think Putin is pulling all the puppet strings?

Looks as good as your latest read sounds. Nice to know you've got berries for cereal. As for the orange one, that just shows how delusional he really is, and as you say, dangerous.

Those blackberries look delicious. You have a super day, hugs, Edna B.

I really enjoyed The Overstory as well. A very interesting read. You know it's the height of summer when the blackberries are prolific. The cobbler looks delicious! Dee

and now he's actively ignoring the Supreme Court on its DACA decision.

I put Overstory on my to read list but is it fiction or nonfiction?

great looking cobbler. I have an excellent cobbler recipe that is quick and easy.

Oh, yum. That Dave is definitely a keeper. And, yes, I read about Trump and the Yankees with great glee and laughter. If for nothing else, he does provide a laugh now and then.

I'll take that blackberry cobbler, please, even if the seeds may bug me. It looks delish. Trump has the personality of a spoiled child. He has never grown up and never will. It's all about him, him, him!

I think your burdock is maybe different from ours (not really an original thought, I know) because I don't remember EVER seeing purple blossoms on ours. And ours grows low to the ground. I've never seen any taller than 18-24 inches, tops. With those pretty blooms, no wonder you like it - I do, too!

You've hit the jackpot with those blackberries this year :)

That blackberry cobbler looks so incredibly good! And yes, we have a toddler for president. Aren't you glad you are in the UK?

Andrew: Yeah, I don't trust the polls. They burned us so badly on the Clinton-Trump race that I will never trust them again. People (especially Trump voters) lie to pollsters.

Mitchell: Ha! "This end up"

Peter: Yeah, I've heard from several long-haired dog owners that they're a nightmare. They don't even stick to Olga!

Angelicastar: Well, thanks for reading and sorry to hear about your health. It's good that you can still keep a few plants. Maybe you can grow more in pots indoors, where it's easier to reach and care for them?

Bug: I bet there's burdock in NC. I would be surprised if there's not. But yeah, it has its downsides, especially for owners of long-haired pets! (Apparently the roots are edible, though.)

Red: That's surprising. It must get too cold?

Sharon: The broad leaves are the most impressive thing about the plant. They're really pretty amazing.

Ms Moon: Can you imagine how fabulous it would be to wake up with Trump defeated? I'm afraid to think about it. I don't think I could stand to have my heart broken again.

Linda Sue: Yeah, I know, they can be problematic. They grow wild on the Heath, but fortunately Olga has never had a bad burdock episode.

Robin: Yes! Read it! I think you'd really like it. I'm scared of Putin too, but at least now we KNOW what he's up to and how he's trying to influence things.

E: He's so thin-skinned it's pathological.

Dee: It turned out really well! I love blackberry season. In Florida they ripen much earlier, like in April.

Ellen: It's fiction, but it's loosely based on real incidents.

Catalyst: You got to laugh to keep from cryin'!

BethB: It's amazing how juvenile he is, and how utterly without any inner moral compass.

Jenny-O: There's a greater burdock (Arctium lappa) and a lesser burdock (Arctium minus). But they both have purple flowers, looking something like thistles. I don't know what yours might be, unless you've just never noticed the flowers?

Michael: It's amazing that man is running the country. Amazing and frightening. (Boris is no picnic either, but he's smarter and better balanced as a human being.)

I think you must be right, I've never noticed the flowers on burdock. Maybe they bloom during the hottest part of the summer when I am hibernating inside :)