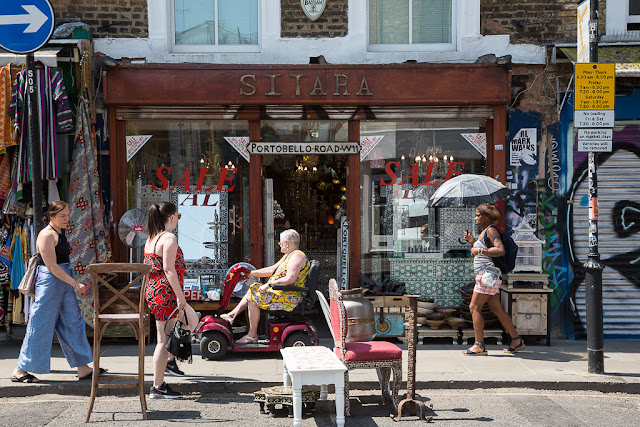 I said to him, "Who are you and what have you done with my husband?!"

This is a guy who's barely left the house or garden since lockdown began in March, and a guy who doesn't like "going for a walk" under even the best of circumstances. But yesterday he said, "I have to get out of here!"

So we walked up to the post office so I could mail a birthday card to my mother, and then we visited a local cookware shop. I'd bought Dave a £100 gift card from there last Christmas, and he'd barely used it. When the place closed in March and the future of retail in general looked very precarious, I was afraid we'd never get our money out of it. But the shop reopened last week. Whew!

Dave picked out some Le Creuset gratin dishes, a metal pie plate and a pie/cake server. But then the woman at the checkout counter said she couldn't read the gift card -- the store had changed computer systems (!). Fortunately Dave had a receipt in his ridiculously overstuffed wallet that showed our last purchase, and included the card balance -- about £89. And that's exactly what our stuff cost. So we called it even and left, mission accomplished.

That was a close call!

Meanwhile, my brother has given me the unwelcome news that two employees at my mom's retirement center in Florida, including one who works in her building, have tested positive for Covid-19. So they have everyone isolating, and I can't imagine how they're managing that in a memory care unit where routine is so important. I've been unable to reach my mom on the phone, and as I've written before, she has trouble communicating verbally anyway, but I think they'd tell us if any of the residents came down with anything. What a nightmare! I suppose it was inevitable, though, given the density of infections in Florida.

I'm reading poet Mark Doty's new book about Walt Whitman's "Leaves of Grass." I must say I've always found Whitman difficult, if not impenetrable, so I'm hoping Doty can shed some light on him. I'm particularly interested in what he has to say about perceptions that Whitman was gay and wrote on gay themes (before they were even understood as such). I'm not far into the book yet but we'll see how it goes.

(Photo: From my walk on Portobello Road a couple of weeks ago.)
Posted by Steve Reed at 6:30 AM