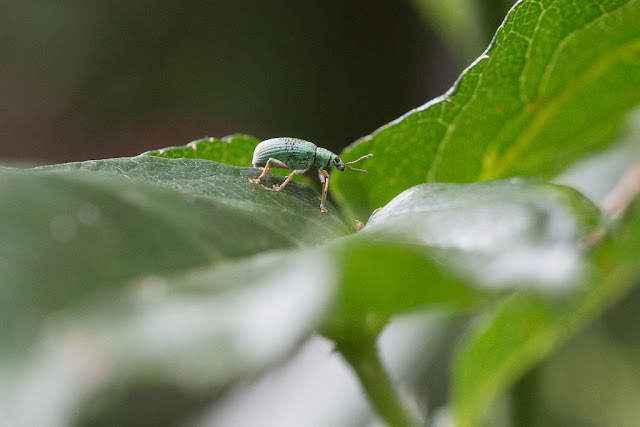 Yesterday I was deadheading roses when I came across this critter on one of the blossoms. I've never seen anything like it in our garden, and when I looked it up, I discovered it's a green weevil of some kind. Apparently they're not as evil as some weevils (rhyming!) but they do eat some plants. I didn't see roses on their list, which makes me think he fell onto the rose bush from one of the trees above.

I had the most bizarre dreams last night. I don't quite remember the plot, to the extent that there was one, but I was in a sprawling modern house and it was pouring rain outside, and there were boxes everywhere and I was trying to get things organized. Dave was there and so was my mother. Other things were happening too but I don't remember them all now.

Last night for dinner, Dave made some incredibly potent (but good) French onion soup with a lot of beef stock and red wine and cheese, and I'm blaming that.

Does my life feel chaotic? Not in my waking hours, but who knows what my subconscious mind would say. I did see a recent article in the New York Times about the need to deep-clean your house if you've been sheltering at home for weeks on end. I didn't read it, though. It sounds like it would feed all my most obsessive impulses. (One of my coworkers observed several weeks ago, not long after we entered lockdown, that she found herself cleaning constantly -- and it's true. When you're home all the time it's amazing how quickly the place gets grubby.)

I got a surprise in the mail on Tuesday. Remember how I sent Brobee to Sarah of Circles of Rain? Well, she sent me a hand-painted postcard back: 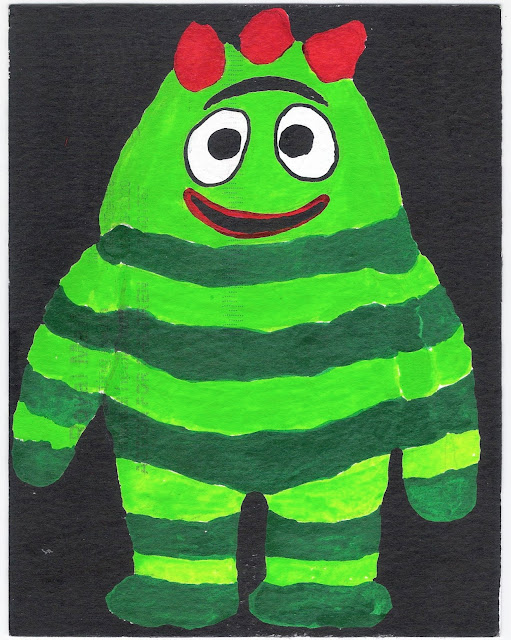 Isn't that awesome? She thanked me and said Brobee has moved in next to some of the stuffed bears she's saved. Her postcard, meanwhile, has taken up residence on our dining room mantel. It's nice to have my own Brobee souvenir.

Some of you asked about Olga's ear. It seems to be healing well and she gives no indication that it bothers her at all. Francisco tells me that Olga and Rufus ignored each other the next day, kind of like two people who'd recently had a really bad date. Rufus's owner told Francisco that Rufus seemed traumatized by the incident too! Rufus is apparently still wearing his muzzle but we all agreed this was just a freak encounter and he may eventually be de-muzzled if he behaves.
Posted by Steve Reed at 6:55 AM