Mysterious Rainbows and a Crabapple 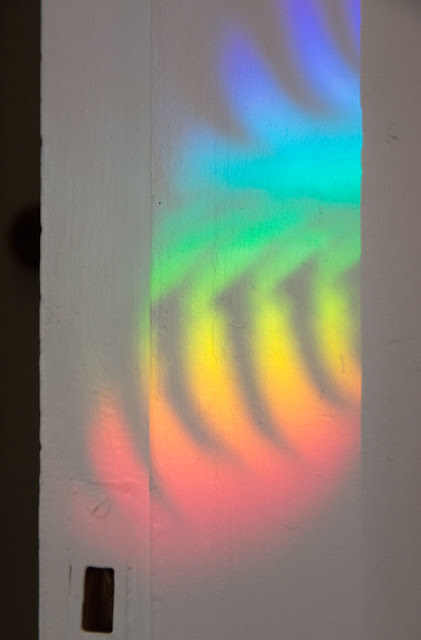 The other day Dave and I were doing something in the kitchen when I noticed these funky rainbows on our walls. They were created by some glass prisms we have hanging in the living room window. The interesting shadows were cast when the light passed through Dave's tree fern. 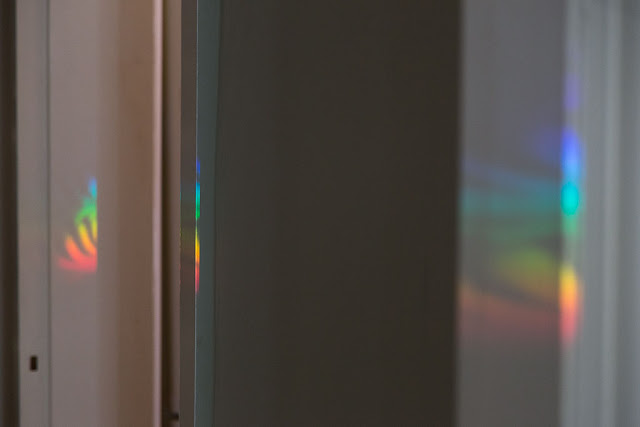 Yesterday felt a bit frustrating. I've never thought of myself as a person prone to boredom -- I can usually find something to keep myself entertained. But I am officially getting really sick of hanging around the house. Even though I'm reading a good book ("The Overstory" by Richard Powers) I was feeling very confined.

Taking a walk didn't seem appealing because I've walked all the neighborhoods around here so many times, and yet I need exercise. So I made myself take a half-hour stroll. 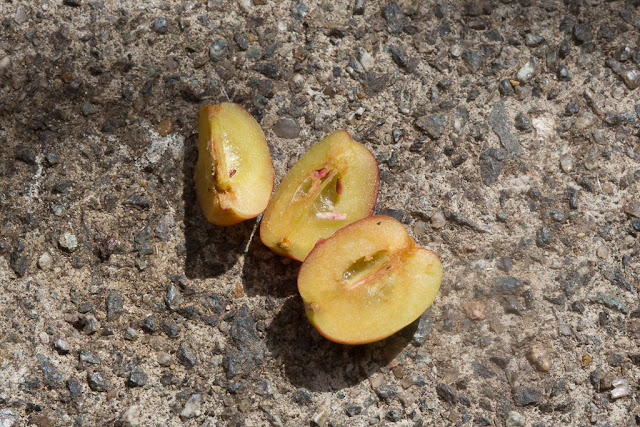 I checked the once-viney tree, where the suffocating hops vine -- dare I say it -- appears to be officially dead. I haven't seen any sprouts for a couple of weeks. I also picked one of the little red fruits to finally determine what kind of tree it is. I've been calling it an ornamental cherry, but after cutting open that fruit, I decided it is, in fact, a crabapple. What do you think?

I went to the grocery store to pick up a few things -- continuing to wear my mask, since as of yesterday, they're mandatory in shops. (Although some shops say they won't enforce the rule.) Then I came home and mowed the lawn. Ho hum.

This evening we're supposed to have a friend from school over for drinks -- our first houseguest since all this virus stuff began back in March. Maybe that will make me feel less confined.
Adding to my frustration, I ordered a new t-shirt on June 21 from the USA. That shirt has been, shall we say, on a slow boat. I've been following the tracking, and its journey has been halting and circuitous. It was mailed from Santa Ana, Calif., on July 3, and it floated around Los Angeles for eight days before being flown to London -- and then, peculiarly, it seems to have gone back to New York. It is now theoretically in London again, having departed JFK on July 17. Apparently the postman tried to deliver it at 7 a.m. (!) on Thursday morning, but Dave was asleep and I must have been walking the dog. I saw all this on the tracking history but I didn't get any kind of delivery notice from the postman. Still, I put in a redelivery order for Monday. Let's see what happens.

I would blame Trump's subversion of the U.S. postal service, but clearly the Royal Mail bears some responsibility too.
Posted by Steve Reed at 7:33 AM