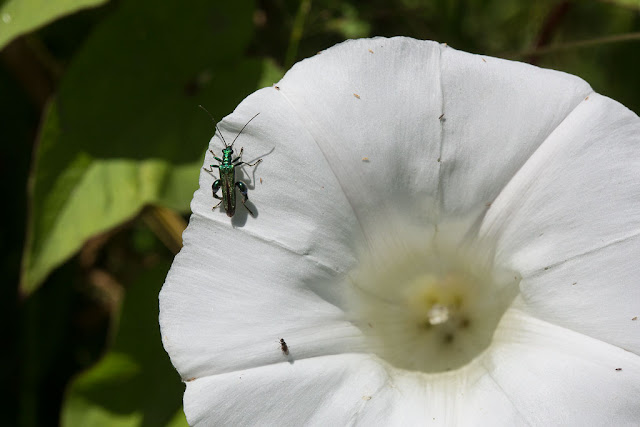 When I was walking on the Heath on Sunday I found this shiny green thick-legged flower beetle (Oedemera nobilis) -- they're pretty common but I always enjoy seeing them because, as I've said before, they remind me of David Bowie. In fact I always think of them as David Bowie beetles.

Well, I'd like to say I did something productive yesterday but it would be a complete lie. Oh, I guess I did deadhead some flowers in the garden -- so there's that. It's amazing how quickly a completely unstructured day can slip away.

I've been wrestling with the new Blogger. Well, I shouldn't say wrestling -- it's mostly been fine -- but I continue having trouble with using html code. You know, like embedding a video? In "old" Blogger there was a button at the top left of the dashboard that allowed me to toggle between the "compose" and "html" modules. I'd switch to the html module and embed the code, then switch back to compose to write the post, with the video now embedded. If there's a way to do that now -- and I've read online that there is -- I'm not seeing it. I have to switch back to "legacy" Blogger every time I embed a video. I suppose I should figure that out.

Also, Google Chrome (my browser of choice) and Adobe are going to stop supporting Flash at the end of the year. I don't know if this means Flash will instantly stop working -- I suspect it will be a more gradual thing. A couple of my blog widgets use Flash. One is the "koi pond," which I really like and I've had on my blog for years -- it's quite old and although I'd like to keep it, I suspect technology is leaving it behind. The other is my Flickr photo badge, which mysteriously stopped working several weeks ago. It's still in the sidebar way down at the bottom, in the probably vain hope that it will magically reactivate.

(If you're reading this on mobile, like on your phone, I don't think you see any of those widgets anyway.) 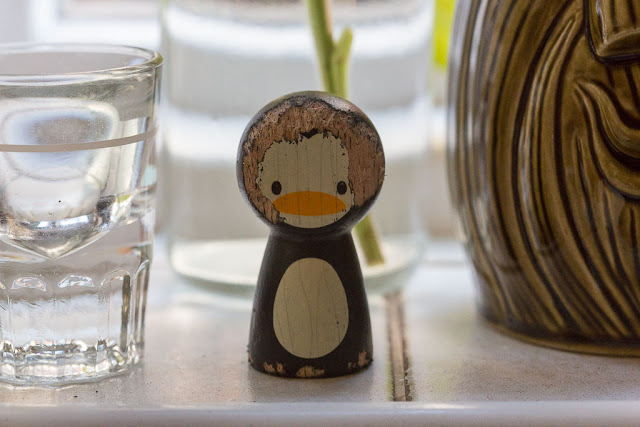 I found this little wooden toy (I think?) in the forest on the Heath on Sunday. I have no idea what it is, but I kind of like it, especially how it's all gnawed away around the edges. It looks like it's wearing a parka. Is it a penguin?
Posted by Steve Reed at 8:02 AM