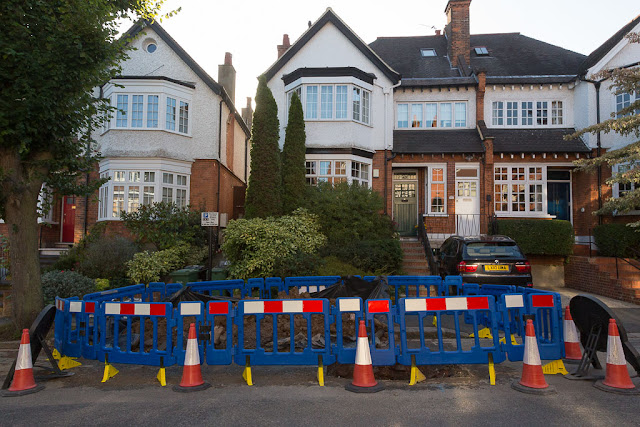 There's another water main break right in front of our house. This has happened several times now. I don't know if there's a particularly weak section of pipe there, or if we just have lousy luck, but we definitely seem to be the epicenter of water repairs on our street.

We first noticed it a few weeks ago when a sinking puddle formed in the middle of the pavement and water began trickling down the gutter. We called to report it, and I know the neighbors called too -- but it took Thames Water a surprisingly long time to finally get here and start to fix it.

Anyway, they're here now, and as you can see they've dug up a good-sized section of road.

I don't know if you can tell from the photo, but our front garden is also ridiculously overgrown. The bushes are obscuring our front window and overhanging the sidewalk. I've notified our property manager that they need a trim (we manage the back garden but the landlord manages the front) -- we'll see whether that has any effect. 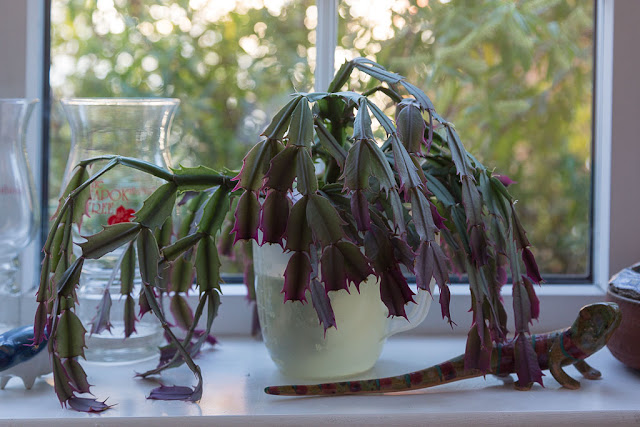 A couple of big pieces broke off the christmas cactus at work. (It's now much bigger than it was when I first pictured it here on the blog, so it could afford to lose a couple of branches.) They were already pretty wilted when I noticed them, but I put them in water and brought them home last night. I'll plant them over the weekend and see if I can root them. Supposedly christmas cactuses are easy to root. We'll see!

We're having our first autumnal blast of chilly weather. I went out with the dog yesterday morning, wearing shorts and a thin sweatshirt as usual, and I was freezing by the time we were halfway through our walk. I checked my weather app on my phone and it was 45º F! No wonder I was cold!
Posted by Steve Reed at 6:32 AM