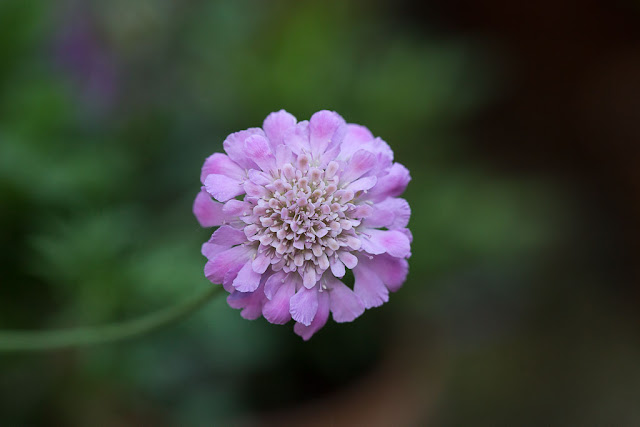 Here's another one of my plant rescues. Dave and I went to Waitrose, our local supermarket, several weeks ago and saw this plant, a scabious, looking really sad. It was wilted and many of its long flower stalks were broken. It was the last one, and it had been priced down. So we bought it.

("Scabious," by the way, is kind of a gross name, isn't it? A little too much like scabs or scabies. Well, there's apparently a connection -- it was once believed to be a treatment for scabies and other itchy skin conditions. Hence the name. Who knew?!)

Anyway, I brought it home, potted it up and trimmed it back, and now it's doing great -- so great, in fact, that it's blooming again. I think it will overwinter and come back next year. Fingers crossed!

I don't think I've mentioned it yet, but we have an "innovator in residence" this year at the school where I teach -- Kwame Alexander, a well-known writer of books for children and young adults. He's a great guy and he's pretty much based in the library, so I've been seeing him in action quite a bit. Yesterday he led a workshop with our English teachers in which they wrote and published a poetry book in a single day, and although I wasn't participating, it was fascinating to sit by and see (and hear) the process unfold. Some of the teachers wrote remarkably personal and touching poems. I learned a lot, both about poetry and my colleagues!
Posted by Steve Reed at 6:35 AM