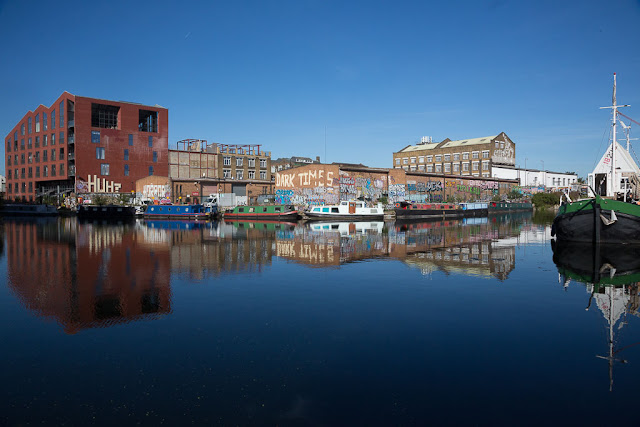 I walked the final two sections of the Capital Ring yesterday, which completes my 78-mile circular journey around London and put me right back where I started last March. Seems like a really long time ago!

Yesterday's portion of the walk started in Hackney Wick, where I picked up the canal towpath and enjoyed fine views and reflections across the relatively still water. 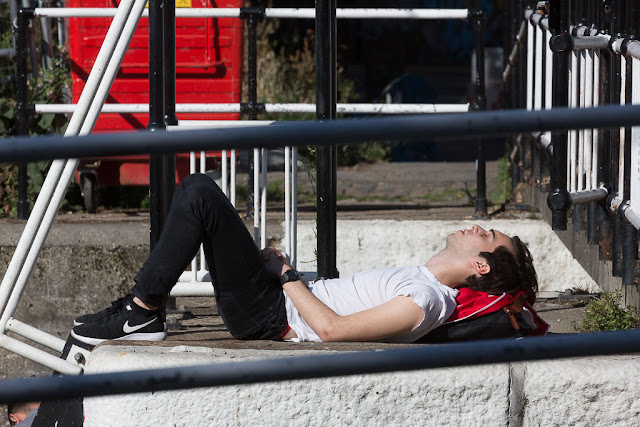 Londoners never miss an opportunity to take advantage of a nice sunny day. (And yesterday's weather was about as close to perfect as a person could want.) There were lots of people out and about, some simply soaking it in like this guy, others biking or running. 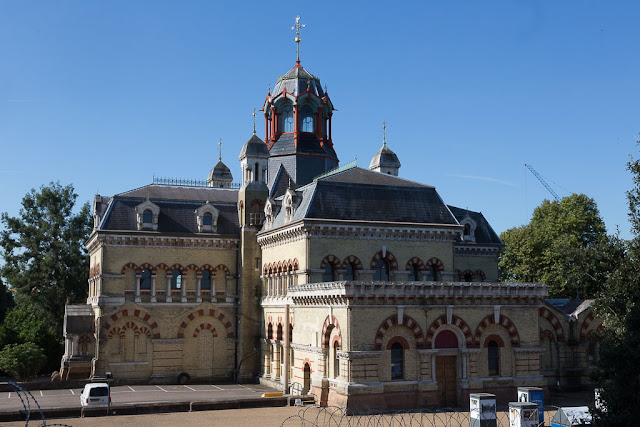 The walk left the canal and joined the Greenway, a 6-mile walking path on top of the elevated Northern Outfall Sewage Embankment, a legacy of Joseph Bazalgette's sewer system built in the 1860s and still in use today. It runs from Hackney to Beckton, where the sewage is treated.

The Abbey Mills Pumping Station (above) was built in 1868. It's a lift station, bringing sewage back toward the surface from the gravity-operated system beneath the ground, and apparently it's still used occasionally, though most of the work is done by a more modern facility next door. It's definitely the most amazing, ornate lift station I've ever seen! 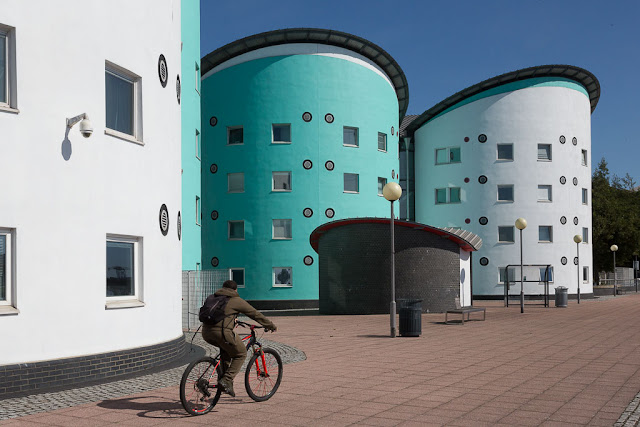 Eventually the path reached the Royal Albert Dock, a former shipping basin connected to the Thames. The University of East London, with its groovy dorms (above) is located here, and London City Airport is just across the water. I could watch planes taking off and landing with the skyline of London in the background. 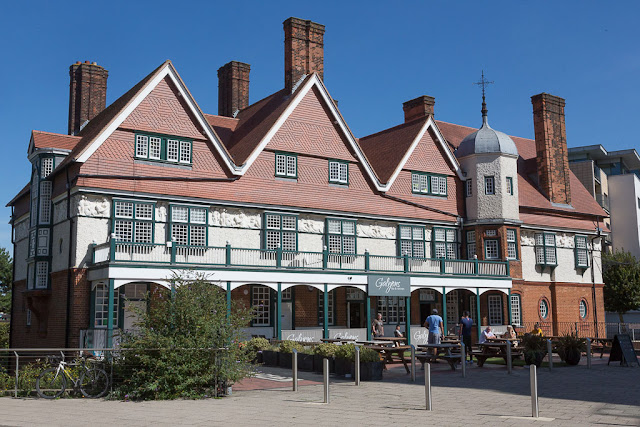 I accidentally veered off the path and passed the ornate Galyons pub, where I decided to stop for lunch. 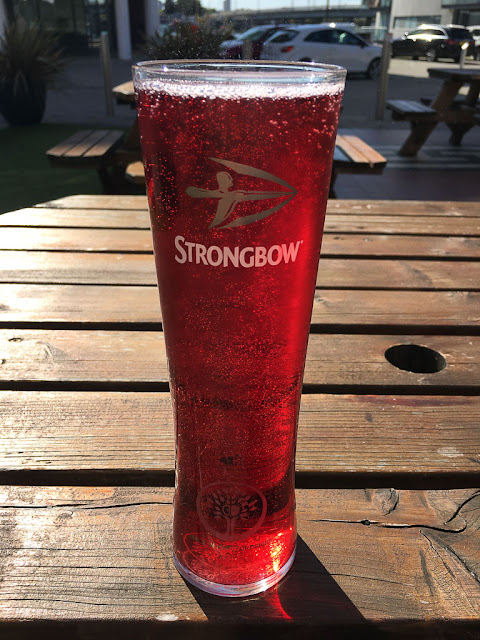 I'm not usually a cider drinker, but I'd never seen Strongbow's "dark fruit" cider before, so I decided to try it. Not bad! And a beautiful color, too. I asked the bartender if it was a seasonal drink, but he said no -- they stock it because the university students like it.

I rejoined the path and soon found myself at the Thames, walking along the riverfront. 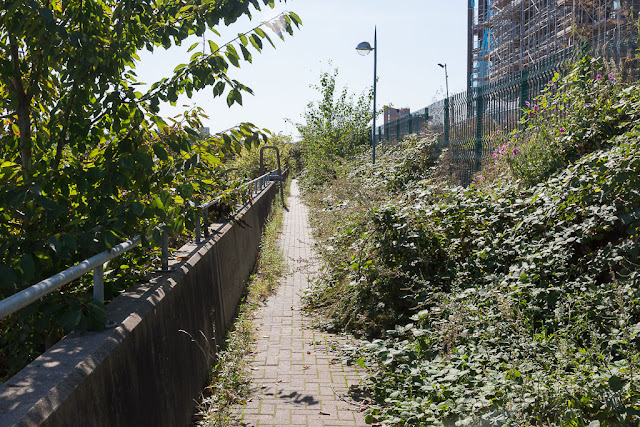 The path got a bit dicey at this point -- overgrown with blackberries and buddleia, and passing behind several large construction sites. I eventually came to a couple of canal locks leading from the river into the shipping basins. The map and Capital Ring signage directed me to walk across the lock arms, but at the King George V lock there were gates closed and padlocked across the path! I couldn't believe it. I had to climb over a chain-link fence to keep going -- and judging from the condition of the fence others have done the same thing. Super annoying!

From there the path went behind some housing estates and through Royal Victoria Gardens until it reached the entrance to the Woolwich Foot Tunnel, a pedestrian tunnel beneath the Thames that opened in 1912. I took the lift down to the tunnel itself and walked a quarter of a mile beneath the river to Woolwich.

In case you're wondering what it's like down there...

...here's my not-very-dramatic 22-second video. There were only a few other people in the tunnel but a trio of boys with a basketball managed to make a fair amount of noise in that echoey space. 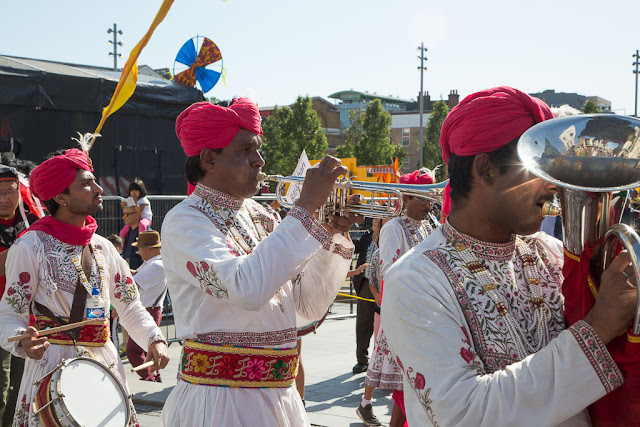 Finally, after walking 9.2 miles, I got to Woolwich -- only to find a carnival going on! I was too exhausted to hang around very long, but I saw some Rajasthani (I think?) musicians and lots of other people marching in a parade around the main square. I caught a Thameslink train that took me straight back to West Hampstead. 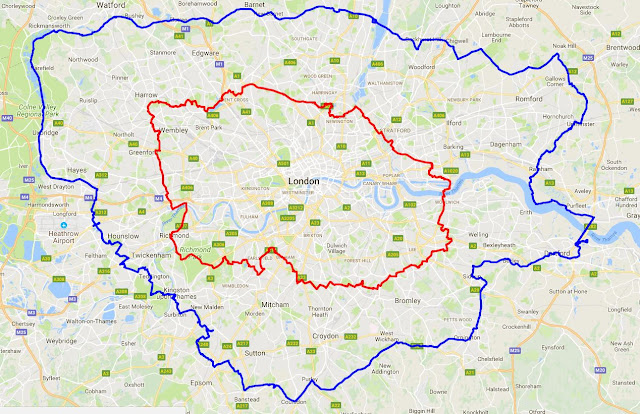 And now I can say that I have walked both the 150-mile London LOOP walk (the blue ring) and the 78-mile Capital Ring (the red one, obviously). Whew!
Posted by Steve Reed at 8:00 AM