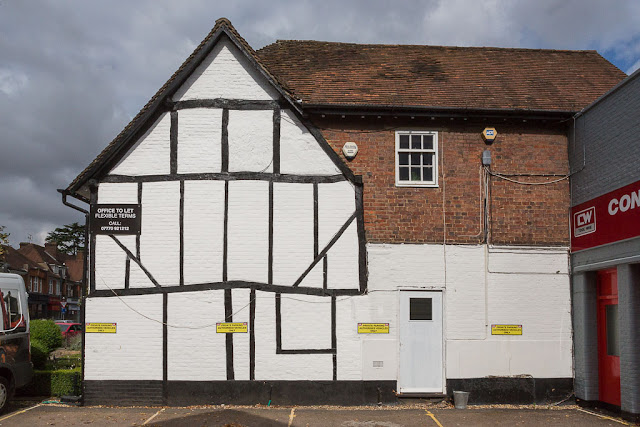 A few weeks ago, when I first wrote about taking foxglove seedlings to some of my co-workers, blog commenter Frances said, "If you would like to come to Harpenden....easy on the train and Olga would be welcome....I would love some foxglove seedlings!"

Operating on my general principle that I will happily go anywhere I have never been before, I took her up on the challenge. Yesterday morning I hopped a train in West Hampstead and rode 15 minutes or so north to Harpenden, a town in Hertfordshire. 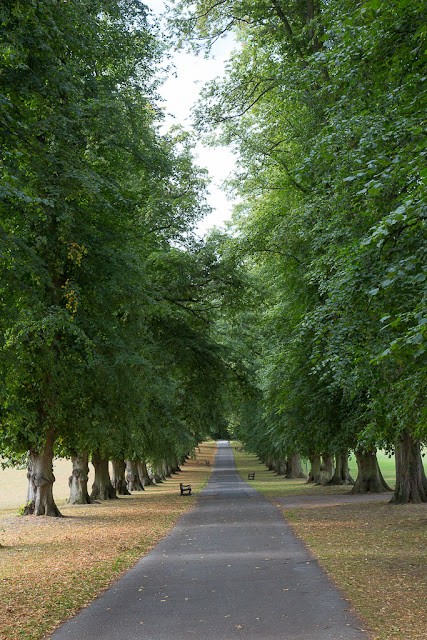 I took Olga with me, as well as eight foxglove seedlings, and Frances met us at the train station with her schnauzer, Alexi.

Olga was fired up at being somewhere new, and was about to pull my arm out of the socket, so we went to nearby Rothamsted Park where I could let her off the leash to chase her Kong and blow off some steam. We admired the stately avenue of lime trees planted by Sir John Bennet Lawes, a Victorian agricultural scientist who founded a nearby farming research center that not only still operates but is apparently quite famous.

We also visited the churchyard of the local Anglican church, where Olga did her best to catch some Harpenden squirrels. Just like London squirrels, they're way too fast for her.

(Alexi, meanwhile, was being much better behaved and seemed content to stay by Frances' side.) 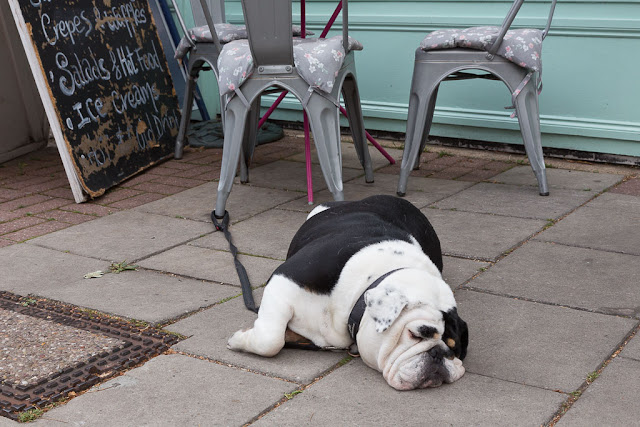 On the Harpenden high street, with its many small parks and green spaces, we found this exhausted and possibly narcoleptic bulldog in front of a cafe. It didn't even stir while I took its picture.

We looked for a place to have a drink. Olga had a suggestion... 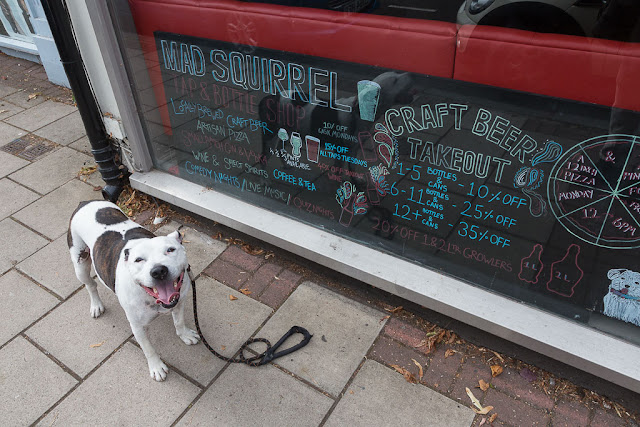 ...but alas, the Mad Squirrel didn't appear to be open. 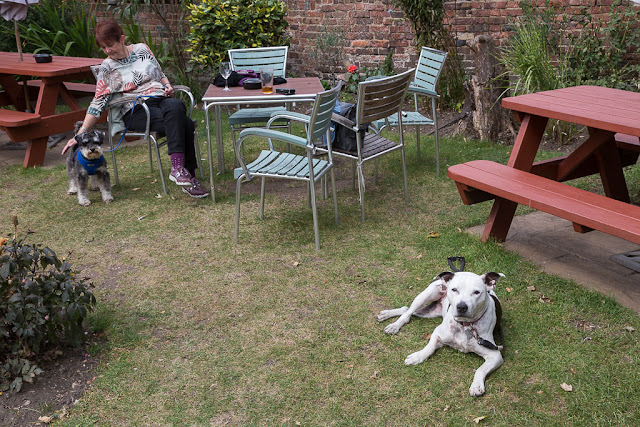 Instead we went to the Cross Keys pub, which has a little beer garden in the back. I had a pint. (Hey, it was noon! Almost!)

Frances and I talked about our families and compared notes on other blogs we read (we have several in common). Frances doesn't write a blog herself but she's a regular reader, which is great -- it seems fairly rare to meet blog readers who aren't also writers! 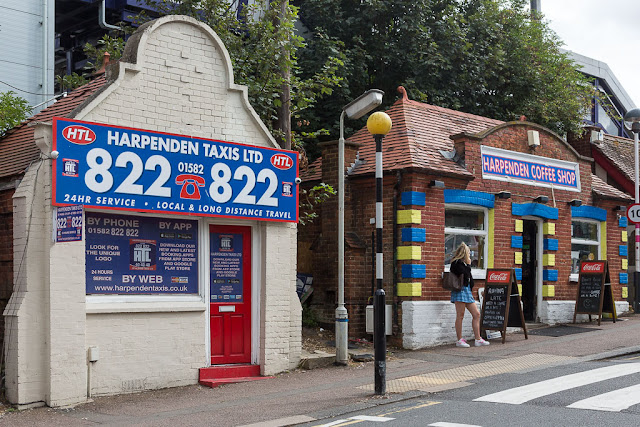 Then I headed back to London, in time for a late lunch with Dave, and spent the afternoon on household tasks. I still haven't planted our own foxgloves. Frances said she's going to put hers in pots to grow on before transplanting to the garden later. I may do the same. They still seem awfully small to simply surrender them to nature now.

In the evening, Dave and I continued watching "Top of the Lake," a Netflix series set in New Zealand and produced by Jane Campion (of "The Piano" fame). I'm really enjoying that series. It's got great atmosphere -- a dark plot set against the grey skies and mountainous wintry landscapes of New Zealand's South Island. Check it out if you haven't already!
Posted by Steve Reed at 7:05 AM

It was a lovely morning showing Harpenden to you , and good to meet you and Olga. I wonder if that bulldog is still there !

What a lovely place to visit! I lived for a few years as a teenager in St Albans, just south of Harpenden, but I can't remember ever going to Harpenden. I know we caught a bus from school that went towards Harpenden, and the name is familiar, but when you're a teenager, you are not as independent to go browsing around as I would do now (more than 50 years later!) Thank you for the interesting account and pictures! (Not impressed with the latest version of recaptcha to prove I am not a robot - having to tap on all the pictures with cars was a challenge that took me about 10 attempts to complete successfully - not your fault of course).

What a lovely outing!Good luck with your planting.

Those seedlings have taken on a life of their own beyond the usual meaning! What a lovely journey they inspired!
Those lime trees are noble. That bulldog's leash appears to be fairly unnecessary. Could he even waddle? Olga looks like a spritely teen compared to him. (Or her, I suppose.) And now you have a new friend.

We just got Netflix so I will check out that show. I hope it is on Netflix Canada.

Yeh for schnauzers. they're usually the antsy dogs.

It's always lovely to meet up with someone who has been a virtual friend here in the blogging world. Looks like a fun outing.

I had no idea lime trees would get that big! they are magnificent. and what a nice outing.

I really like the New River Studios artwork. It's quite different. I think it's awesome that you went to meet Frances. I'm glad it turned out to be a grand time. I met two of my dearest friends that way. I travelled to Wisconsin and spent a week with them. They were such wonderful folks. There's a lot of really nice folks out here in blogland, whether they write or just read. You have a wonderful day, hugs, Edna B.

What a lovely visit! So fun to hear of folks from the blogosphere meeting up :)

That is one huge bulldog. And Olga really does look like she's laughing about the Mad Squirrel!

What a great visit to another interesting place in England. That path lined with lime trees is gorgeous. I love places like that and I'm glad Olga got to go along.
Thanks for the tip on Top of the Lake. I've been watching Traitors which is also a little on the dark side.

P.S. That bulldog is adorable. I have a special place in my heart for English bulldogs having grown up with one.

Blogging can create such great friendships. And yes that bulldog is a peach.

That'''s great that you got to meet a blog friend --- & that looks like a lovely town. Love the narcoleptic bulldog - hilarious.

P.S. In case David sees this - you don't have to do the captcha thing - just ignore it & your comment posts anyway.

Frances: Ha! That bulldog didn't look like it was going anywhere! I hope John Gray sees this post. :)

David: Well, even if you never visited Harpenden while you lived here, at least now you've had a virtual tour! Sorry about the Captcha thing. I have no control over the style of security device that Google uses -- only whether to have it on or off, and I need it on to help control spam. I comment on other blogs where I have to do that picture thing and it drives me crazy too.

Ms Moon: That bulldog definitely needs some exercise and maybe a diet!

RedPat: I bet it is!

Robin: It IS really fun to put a real face with a name!

Ellen: They're not limes like the citrus -- in Britain a lime tree is another thing altogether. In America we know them as lindens. https://en.wikipedia.org/wiki/Tilia

Edna: It was very fun to meet up. I always enjoy getting to know people through blogging.

Jenny-O: Olga is funny how she gets that big smiley face sometimes.

Sharon: I grew up with bulldogs too. My dad bred them for a while.

Bug: I DID NOT KNOW THAT! What's the point of having Captcha if you can just skip it? Crazy. I mean, I hate that picture thing too, but I'd at least like it to work!