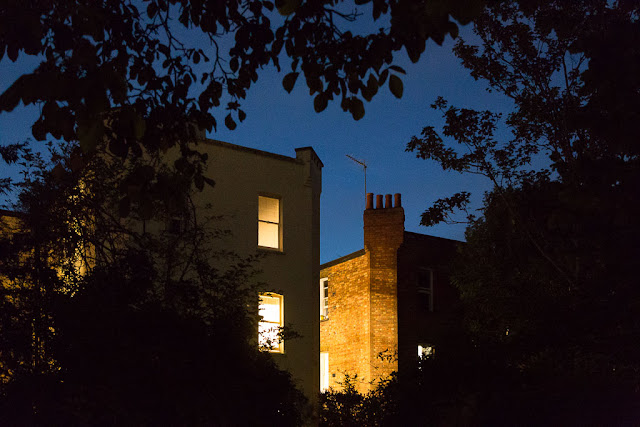 The days are drawing in, getting darker and darker. The garden is well past its peak -- one buddleia is still blooming purple among its dead seed heads, one last red-hot poker is slowly fading, the inulas are done, the cardoon is entirely brown and listing to one side. Yesterday I picked a last handful of blackberries for my cereal.

When I mowed the lawn on Sunday I did some trimming and neatening, but I don't want to be too neat. Apparently it's good for bugs and critters to leave some dead and dying plants as winter hideaways. I haven't touched the wildflower area at all -- it's a tangled mess but I'm just going to leave it alone, so all the plants can go to seed and the insects can hunker down.

A few nights ago, while Dave was Skyping with his parents, I went out and sat in the garden in the dark. (I usually join in their Skype calls, but sometimes I like to give them space to catch up on family business more candidly without me there.) I never sit outside at night, for some reason, but it was really nice. The apartment blocks behind us were all lit up, and the sky was a dusky blue. I could even see stars -- not a lot, because it's London and light pollution drowns out everything celestial, but a few. 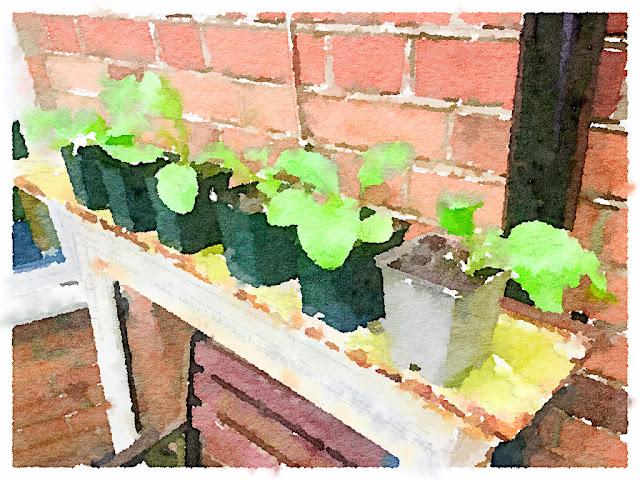 I've repotted our foxglove seedlings and lined them up atop the old mantelpiece on the patio. The squirrels can't easily get to them there. I'm not sure they're getting enough sun -- that spot is entirely shady -- but I don't know where else to put them so the squirrels can't rough them up.

Dave and I have been watching "Mindhunter" on Netflix. We really like it! I'm trying the second season of "Top of the Lake," too, but I don't like it as much -- it's changed settings from New Zealand to Australia, and now there is no lake, and the main character seems almost like an entirely different person. Where she was firm and certain in the first season, she is shaky and hesitant now. It's very strange. I'll probably stick it out, because I usually do, but I'm waiting for the magic to reoccur.

Oh, and Dave said a bird got into the house yesterday! We leave a living room window cracked open, and apparently a little tit flew in and couldn't get out again. Dave came out of the shower and found it flapping against the glass. Olga, lying on the couch, was completely confused. He opened one of the windows and it flew away unharmed. I've seen birds sit on that window frame before, looking for spiders and other insects that nest there, so I'm not surprised one took a wrong turn and flew inside. This is what happens when there are no window screens!
Posted by Steve Reed at 6:51 AM

That Yorkie does make me laugh!!

My seedlings have survived a couple of days since I moved them nearer the house......they don't get actual sun either, but better than being dug up by mad squirrels!!

I like the idea of you leaving the wildflowers to reseed and to provide nutrients for next spring's crop.
You have become such a caring gardener.

I like that you've given me permission to just leave our wildflower bed be. Sometime in November I might trim the tallest of the dead plants just to make it a more uniform mess (is that even a thing?), but I won't seriously clear it out until next spring when new life starts poking through.

Sitting outside in the dark? More of us should sit outside at night. It's peaceful and there's much going on when you can see the stars.

gone by brown and resting plants are a part of the cycle plus it's necessary for next year's flowers and they provide food during the winter for birds. I'll spend some time outside at night when I close up the garage looking at the stars or the moon or listening to the night chorus.

I'm glad you're leaving the wildflowers to go to seed. It's a good way to keep things going in that cycle of life. We do that, but in the spring we have to go around picking all the California Poppies that take over. I miss seeing a sky full of stars.

I've noticed the days shortening here too, probably not as much as you are seeing right now. Now if the temps would just go down. We did get a nice cool down last night with spot of rain and whole lot of lightening and thunder.
I love that watercolor photo of the plants. Nicely done.
I watched the first season of Mindhunter but haven't tried the second season yet.

I get so annoyed when TV characters change from strong to wishy-washy! It's one of many reasons I stopped watching TV altogether.

It's turned so cold at night here I don't want to sit out in it - but I wish it was milder because the night sky is wonderful here.

Do you really think the squirrels won't be able to get at those seedlings? They're such good climbers, it would surprise me if you've stymied them - lol

YP's imaginary conversation is similar to what flitted through my mind when you said you were giving Dave and his folks privacy!! He's much better at expressing it than I would be, though :)

Autumn is setting here too. I, too, leave my plants, etc as is till Spring. I love your watercolor rendition of the plants. It's really quite pretty. You have a wonderful day, hugs, Edna B.

I didn’t realize there was a second season of Top of the Lake. How weird to switch countries.

Frances: I'm glad the seedling move has worked out, at least for now!

Ms. Moon: Nature knows what it's doing, right? If we just let it do its thing!

Bug: Yeah, from all I've read, it really is better -- particularly if you want the plants to re-seed.

Red: It's true! Why don't we do that more often?

Ellen: We don't have much of a chorus, unless you count traffic noise!

Robin: TOO MANY California poppies sounds like a nice problem to have!

Sharon: Yeah, we're still on season one. It's 45º F here this morning!

Jenny-O: For some reason they just don't go up on that mantel. That's where I kept the seed trays all summer. I don't really understand it, but hey -- whatever works!

Catalyst: Thanks! I wonder what my neighbors think when I'm out in the backyard taking pictures at night? Probably that I'm up to no good.

Edna: Sometimes brown and withered plants can actually be interesting in the garden over winter, with dry seed stalks and that kind of thing.

37P: Yeah, especially when the title specifically refers to the locale!