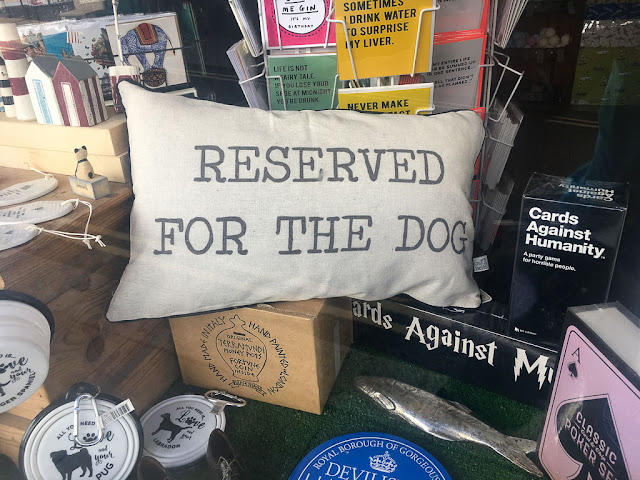 Here's another collection of random photos from my phone.

First, a pillow I saw in the window of a shop in Rye on the day I went to Dungeness. I texted Dave and said, "We need this!" Unfortunately the shop was closed, and it's just as well, because I'd have needed about eight of them. In our house, every chair is reserved for Olga. 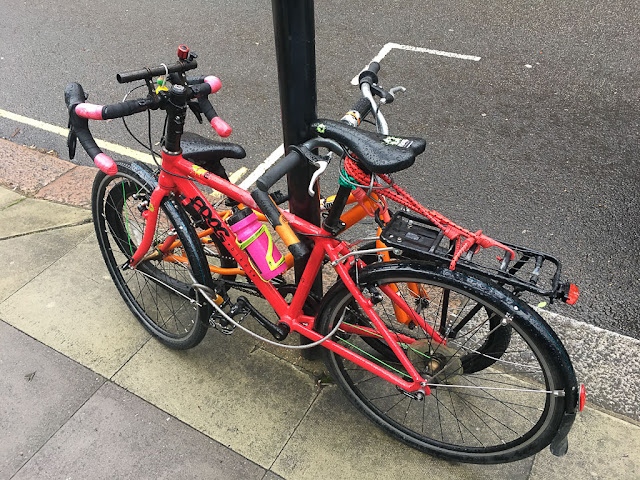 A pair of colorful bicycles near our flat. 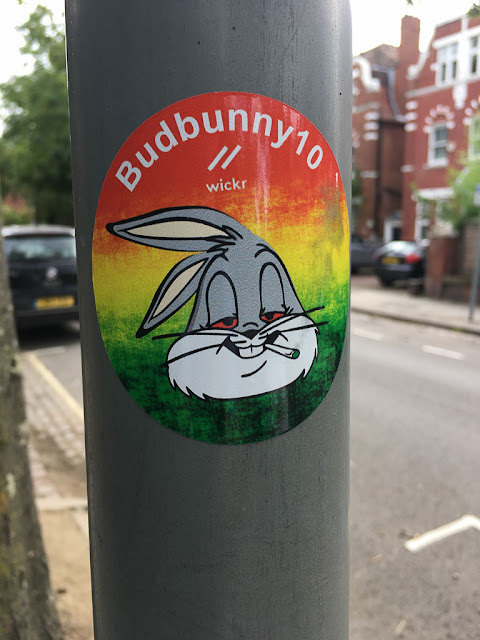 A curious sticker I found in Hampstead. I get the obvious marijuana allusion, but beyond that I'm not sure what this means. There's an Australian company called Bud Bunny that sells ridiculous $80 plush animal pendants for women's purses -- but I don't think it's that. The Urban Dictionary says a Bud Bunny is "just a hot girl that smokes weed," but that doesn't seem right either. So who knows. 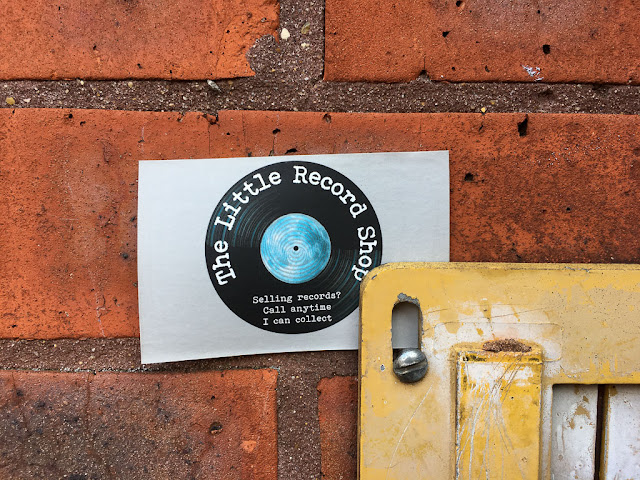 Got some vinyl to sell? This guy wants it. (Alas, I gave all mine to Goodwill about 25 years ago.) 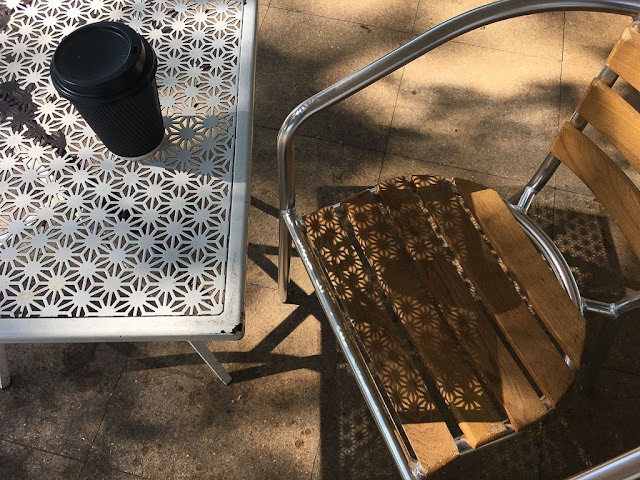 When I stopped for coffee in Finsbury Park during my most recent walk on the Capital Ring, I caught some cool shadows and patterns on the cafe patio. 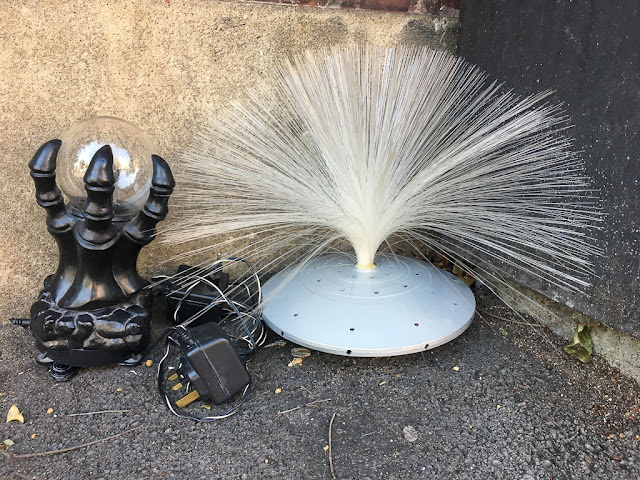 These two lamps were abandoned on our street the other day. I took the flying saucer one home, but it didn't work -- and when I opened it up to see if it needed a new bulb, I found the inside wiring eroded and decayed. Into the trash it went. I guess someone else picked up the claw, because it was gone the next morning. 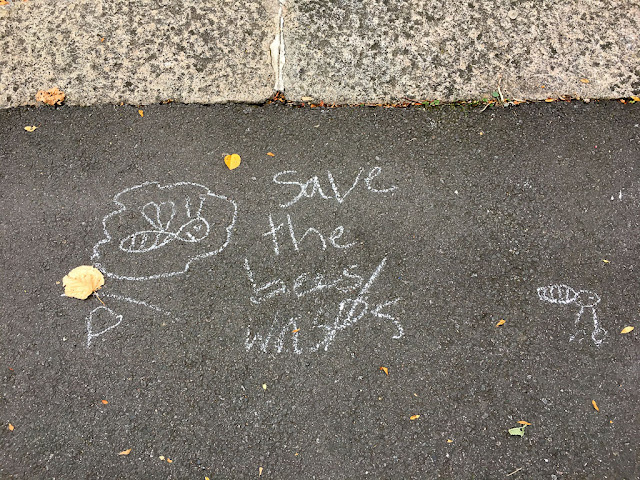 Some chalk graffiti on our street. People always talk about saving bees, but I thought it was nice that this person included wasps in the conversation! No one ever thinks about the poor wasps. 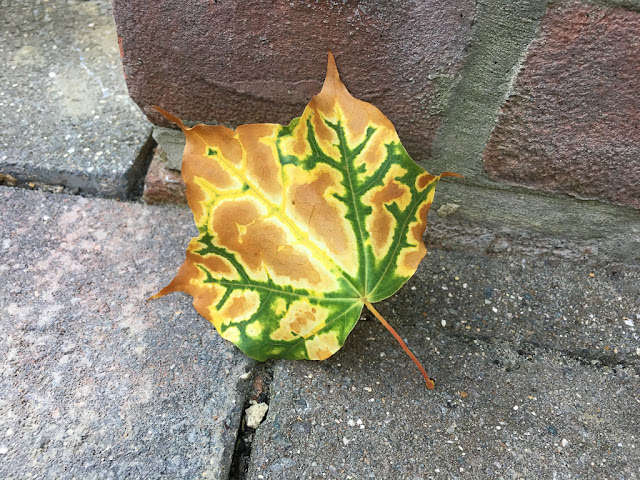 A leaf I found yesterday morning walking the dog. We're getting autumnal around here! 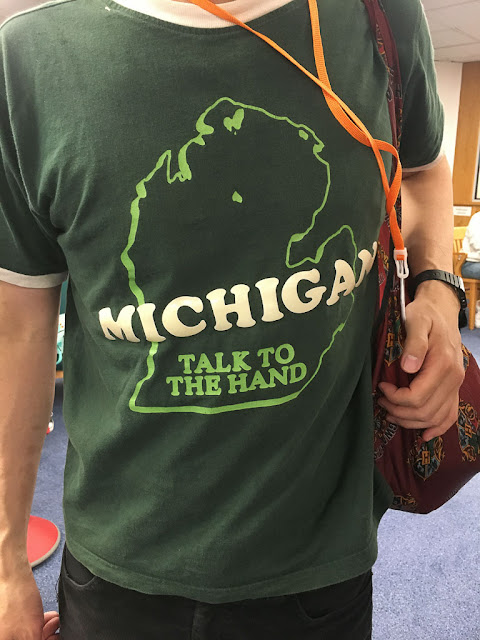 Finally, a guy came into the library yesterday wearing this t-shirt, and I had to take a picture for Dave (who's a Michigander). You know how Michigan people, when describing where they're from, always hold up their hand and point to some position on their palm? Dave was the first person I ever saw do that, but since then I've seen it from tons of people -- it's a thing. Anyway, I thought he'd get a kick out of this!
Posted by Steve Reed at 7:12 AM

Michigan? That's not a hand - it's a boxing glove. Does Dave come from that town in Michigan that is now famous for its life-changing mineral water? I believe it is called Flint.

Ah, yes. The Michigan Hand. I used to go there on business quite regularly. A place where speed limits are just a suggestion.

Miscellaneous is the right world for your title.You do see a variety of odd things. Most people wouldn't notice or wouldn't pay any attention to these items.

I've never heard of the Michigan hand thing, but it is pretty funny. Makes me want to look at a map of Michigan. Nice photos!

What a fun assortment of shots. They got me chuckling as I scrolled along. I love that pillow but what really has me intrigued is the "Cards Against Humanity, a party game for horrible people." That might be worth checking out. All my vinyl went to Goodwill too. Who knew they were going to be worth something? I had not heard that Michigan thing either but it makes sense.

I love that doggie pillow. Your group of miscellaneous photos is quite interesting. I take all sorts of weird photos too. Sometimes one of them turns into a real gem. You have a wonderful day, hugs, Edna B.

Another great collection. I like that cafe table shadow - reminds me of a crocheted shawl.

We still have our vinyl collection and the sound system to play it on, but we haven't done so in years. The days are full and seem to fly by too fast. Plus my husband is quite hard of hearing now so we'd probably blow out the speakers (and my eardrums) with the volume he'd require!

I didnt know that about Michanganders! Now I will always remember the shape of Dave's state!

YP: Or a mitten, as the Michiganders say!

Mary: Ha! I thought that was Montana?

Ms Moon: If and when you ever meet Dave I'll have him demonstrate it. :)

Red: It's the little things!

Robin: It seems nearly everyone is from the area below the thumb joint.

Sharon: I think that's partly WHY vinyl is worth something now. We all threw it away decades ago! I've heard "Cards Against Humanity" is really fun, but I've never played it.

Edna: There's always a lot to see walking around!

Jenny-O: I find as I get older I'm not nearly as dependent on music as I was when I was younger. Not sure why!

37P: And that's just the Lower Peninsula. If you're from the Upper Peninsula, you stick out two fingers from your other hand, perpendicular to the top of the LP hand, and describe where you're from that way. If that makes sense.

Bug: Yeah, and that requires TWO hands to show!

that's a gorgeous leaf. I can only dream about cooler weather. I'd have taken the claw. and we still have our vinyl. when grandgirl Jade was coming for her summer visits she would pick ones and we'd listen to them all day.